What does it mean to be an illustrator?

I have noticed people here frequently talking about "Illustrator(s)" and illustration. I have no idea what 'illustrator' means in this sense!

If your question is essentially "What is 'illustration', and how is it different to graphic design?", that's a good question. It's a difficult one to define. Most people just have a gut feeling for where the line is between graphic design and illustration. My understanding has always been:

Here's some examples taken from Threadless.com, a clothing site with designs made by illustrators and also by designers:

This t-shirt is an example of graphic design. It attracts attention to itself with a strong, clear focal image, and uses a visual hierarchy to pass attention down to the smaller image below, which carries a deliberate meaning about bikes not needing fuel. It works with your attention in a controlled, deliberate way. 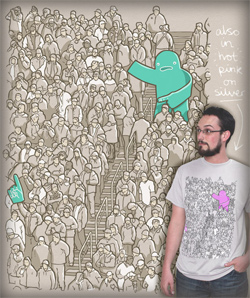 This t-shirt is somewhere between the two, both graphic design and illustration. It creates a whimsical mood even if you don't look directly at it, attracts and directs attention in a deliberate set way (but it doesn't demand attention), and it communicates a deliberate message if you do pay direct attention to it.

A lot of (most?) design work is somewhere between the two like this. Illustrations often carry a deliberate meaning, usually a reframing of the meaning of the thing that it illustrates, for example illustrations in children's books which visually show the action that is being described in the text. A good children's book illustration adds depth to and enhances the very simple text without competing with it. Graphics are often designed to give an abstract impression of mood and personality (usually in a more carefully controlled, analysed and deliberate way), for example a good corporate logo has to meet a lot of very specific requirements about how it is to be used and function, as well as giving the impression of an abstract 'personality' of the company.

It's a very fuzzy line between the two disciplines.

Adobe Illustrator = a particular vector based illustration program made by Adobe.

Illustrator = a person who illustrates. Typically in the world of Graphic Design it would be a person who takes concepts from art directors or editors and creates a visual via drawing, painting or what have you.

In almost every way, I agree with @user568458 so I have very little to add, except this excerpt from the book Illustration, a theoretical and conceptual perspective, by Alan Male.

Illustration have a long history, it has been in existence for centuries, but only been recognised as a distinct discipline fairly recently.

It is often confused with other disciplines most notably that of graphic design and fine art, perhaps because there is sometimes an overlap.

However: illustration is about communicating a specific contextualised message to an audience. It is rooted in an objective need to fulfil a particular task.

Illustrators need to have knowledge, understanding and insight regarding the context within which they are working, the subject matter, and work within the parameters and needs of the target audience.

They need to utilise a breath of intellectual and practical skills that might once be regarded as transferable from other disciplines but considered essential of the illustrator has ambitions to transcend the role of commissioned “hack”.

I'm a total noob here so not sure. But I think Illustrator is referring to vector based graphics programs that create images based on mathematical formulas and therefore scale very well (e.g. Adobe Illustrator), (because everything just has to be enlarged or decreased by a numerical factor).

The alternative is raster-based programs (e.g. Adobe Photoshop) which modify individual pixels and are therefore very good at working with things like photographs which have lots of slightly different colors.

This is strictly my opinion: To be an illustrator is to create original art by hand (pencil paint charcoal etc) or an art based computer program to accompany and enhance the base idea. A few examples of base idea may be a written story or a program poster or a group of singers, who would like to illustrate or highlight a song or the theme of a song. However, the illustrator should keep in mind that the base idea is more important than the accompanying art. Taking care not to create a Rembrandt when asked for simple line art is a part of knowing where the line is between the two.

Not the answer you're looking for? Browse other questions tagged adobe-illustrator illustration terminology or ask your own question.

3
What does Scaling mean in this context?
3
Meanings of mouseover colors (outlines) in Adobe Illustrator?
4
What does 'alpha' mean in design software?
0
What is the different between Typography, Typeface, and Type (Not Font)?
3
How do I edit type in Illustrator to round off corners?
2
What are the terms for the different types of image editors?
0
What does "Uniform Type" mean in Adobe Illustrator (cmd-shift-X)?
5
What is the easiest and most precise way to accomplish such a graphic in illustrator?