Is there a search engine that tells where a certain font is being used commercially? For example which company is using it in their logo, etc.

A specific example is that I would like to know where the font "Danube Pro" is being used already (by which companies in their products or logos).

I don't mean everywhere (in the sense of legally secure) but those logos that are online on the web. I think from a technical perspective it could be done with certain algorithms to crawl websites and use some algorithms to create a database of such. Just like Google crawls for text/content and also since there exists font identification platforms, same could be done for what I described above. My question is therefore if it has been done. Or similar to reverse image searches, such as http://www.plaghunter.com/en/, where you can search where on the web an image is being used just based on the motive.

There is a brand database that does show images/logos at http://www.wipo.int/branddb/en/, but it does not allow you to search for font names. 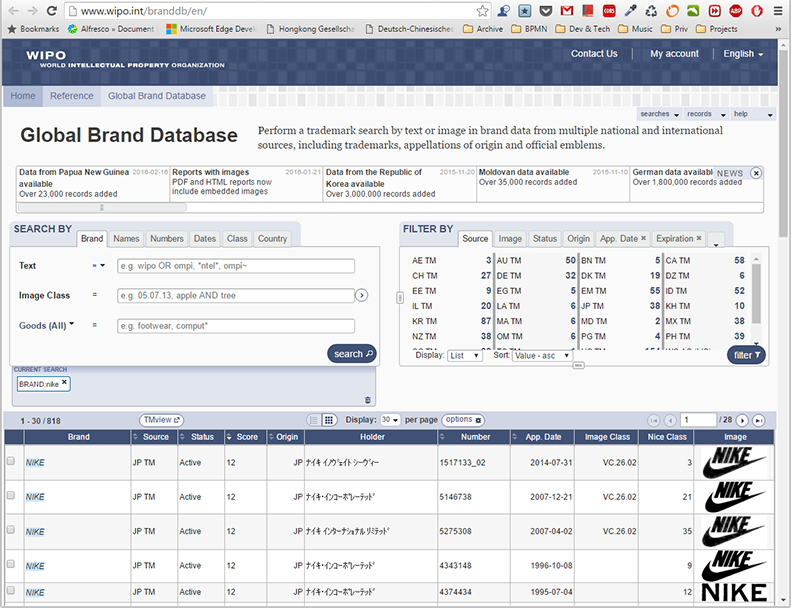 Even audio logo databases exist, http://audio-logo-database.com/, now I am just looking for the same specialized on fonts.

Active Oldest Votes
3
Want to improve this post? Provide detailed answers to this question, including citations and an explanation of why your answer is correct. Answers without enough detail may be edited or deleted.

While not exhaustive, fontsinuse.com has good examples of use of any given font.

Not every business has their logos/etc online, that is also a problem to your request... But might google image search do some good? It can already search images based on other images, I suppose searching for bits of said fonts could wield some results, 'though I bet not satisfactory enough...

It could be done for logos that are using fonts (aren't a flat image), which is a small portion, but for images it would take a lot of processing power to do it; too much for a free or cheap service.

Based on this not being a common request, I doubt it exists.

Not the answer you're looking for? Browse other questions tagged fonts resource-recommendations or ask your own question.

13
How to manually identify a font when the automatic services fail?
6
To What Extent Should Overused Fonts Be Avoided?
0
Commercially free to use font, where M and W are the same
0
How to check if font or other product name has been used?
0
Please help identify this font - Have tried all font identifier programs
4
Alternative Font Family for text in SVG-file
0
Which font is this? And can it be used commercially for free?
3
In a Print-Ready PDF, does the Printer who receives file need to have all the fonts on their machine?