How to use tracking on serif headings on web?

Is there a simple principle or a "rule of thumb" for using tracking on serif headings on a web page (or in general)?

And most importantly what's the reasoning behind it?

For example I could gradually increate tracking (CSS letter-spacing) as headings increase. Or the other way around. Or may be don't adjust tracking at all.

Here is the example I'm working on: 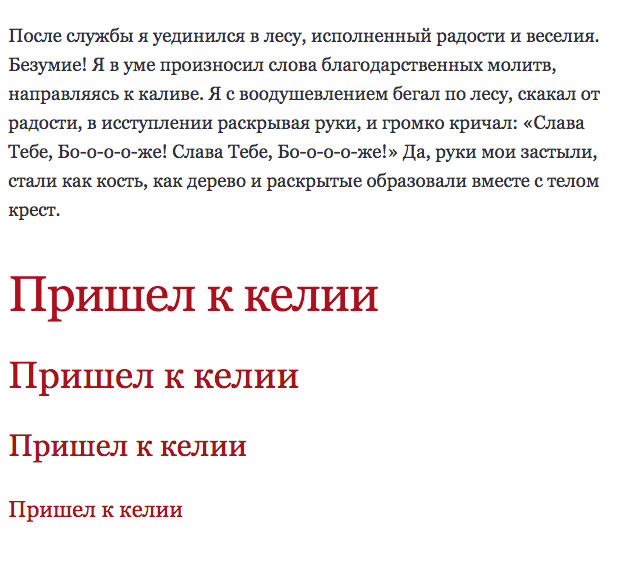 Is there a simple principle or a "rule of thumb" for using tracking on serif headings on a web page (or in general)?

In typography, typing a word in caps and with increased tracking was historically a way of emphasizing text, but this fell into disuse when italic fonts variants became more common since a large tracking makes a word hard to read. This applies to the web as well as anywhere else.

That being said, it kinda depends on what you want to do. Decreasing tracking can be an effective way of making your larger headings look nice and increasing it can make the smaller ones a bit more legible.

For example I could gradually increate tracking (CSS letter-spacing) as headings increase.

Or the other way around. Or may be don't adjust tracking at all.

There is no reason to change tracking in this way, except for you thinking it looks good. This is the only reason you need and it can make your design look great, but there is no general rule for it.

3
Font with equal spacing between letters

4
On which occasions would you use italics in web design?
6
Is there a short authoritative reference of basic design rules and principles?
16
Which is a better design pricing model?
7
Titles and Menu items in lowercase, uppercase, serif or sans serif?
13
Is there a specific term for horizontal gutters?
7
How can I ensure consistency in web design?
0
Headings are in small caps, with increased tracking and numbers. Do I need to use the same increased tracking for their numbers?