So I've tried using a graphics tablet for the first time... I am left-handed. This isn't really an issue, when using normal mouse, as I use my right hand and with the left hand I use the keyboard shortcuts.

However, this is now impossible, as I use my left hand for drawing.

I am pretty sure, there are left-handed tablet users out there - how do you go around this ?

My only viable option would be not to use the keyboard at all (i.e. only when absolutely necessary) and program the most frequent shortcuts into the wacom tablet itself. Although it won't be optimal by any means.

I just continue holding the Wacom pen in my left hand while pressing the shortcuts. 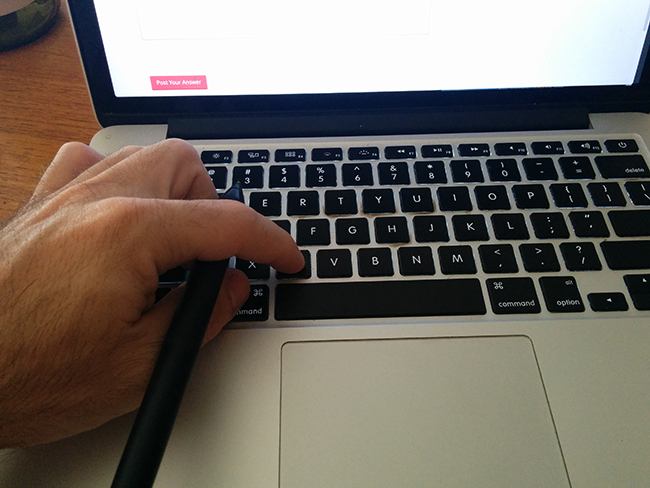 Sometimes I'll use my right hand instead 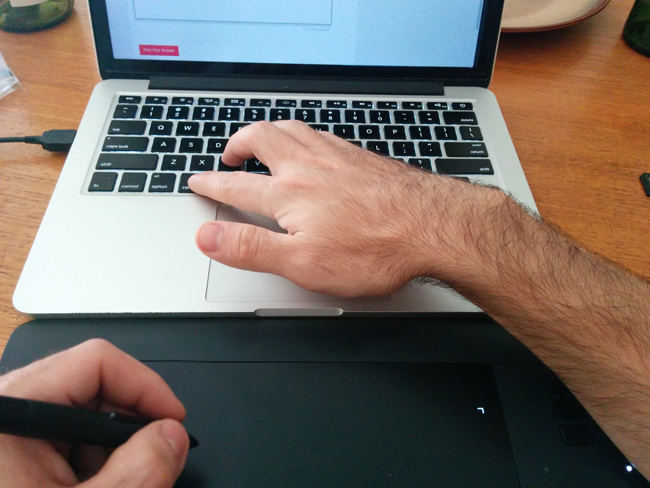 It sounds like you all are overthinking and complicating something that isn't an issue. If you need to do lots of keyboard presses then put the Wacom down for a second just like if you were typing in a word processor you wouldn't leave one hand on the mouse.

If you open up your Wacom Tablet settings (on the Mac you go Apple menu ▶ System Preferences and then choose the “Wacom Tablet” item) then go to the “Pen” pane and tap “Options …” and you will see a setting called “Handedness” and obviously you want to set it to “Left.”

Other than that, the Wacom Tablet works exactly the same for you as for a right-handed user. The keyboard shortcuts are inconvenient for everyone who uses a pen. That is why most Wacom Tablets have buttons on them. You can program the buttons to the Cut, Copy, Paste keystrokes. That is very common. Another option is to turn on Sticky Keys which enables you to press Command+V by pressing Command and then pressing V. But even so, there will still be times when you want to put down the pen and work the keyboard with both hands. That is why most of the Wacom Tablets come with a little pen holder that you can easily put the pen into and pick it up out of quickly. You won’t necessarily hold the pen 100% of the time as you’re working, same as you don’t hold the mouse 100% of the time.

You shouldn’t have to use a mouse when using a tablet. There is only one mouse cursor, and it is controlled by both the pen and the mouse. You might want to use the scroller on your mouse along with the pen, but in that case, the fact that you have been using a right-handed mouse actually works in your favor because you can have the pen in your left but operate the mouse scroller with your right. But beyond drawing and painting, the pen is actually an awesome mouse. For example, you can do file management tasks in Finder (and I assume, in Windows Explorer) much faster with the pen than with the mouse. You can select menu items in Photoshop or manipulate windows much better with the pen than the mouse. So if you haven’t been doing so, I suggest you just use the pen with your computer 100% of the time and within a few days you may never go back to the mouse. I haven’t used a mouse at all for many, many years. The pen is just so much more accurate and much faster.

Keep in mind that there is an adjustment period where the pen will feel strange to you. It takes a little while to develop the proper hand-eye coordination and muscle memory. But after a short while, the location of common objects you are using like Photoshop tools and system menus will get “into your hands” and it becomes second nature to just reach for them. That is what you are aiming for. But it does take an adjustment period.

Also, keep in mind that even if you are great with pencil-and-paper drawing, that is not what you are doing with a Wacom Tablet. In Photoshop (or another bitmap editor) you are painting. It is more like an airbrush than a pencil. In Illustrator (or another vector drawing app) there is drawing but it is more like calligraphy, and there is also manipulating shapes and nodes with a super-accurate mouse. So again, there is definitely an adjustment period where you will work more slowly and deliberately and it can be frustrating. However, once you get through that adjustment period, you will likely work 5–10x faster than with the mouse, and also do much better work than with a mouse because of the additional control that you have over the tools.

I have begun using a tablet as a lefty. I'm doing 3d sculpting and love keyboard shortcuts. I think the solution for me is to learn to use my right hand for drawing just like I've always used a mouse. My tablet doesn't have shortcut keys and I found I was getting cramped up trying to type shortcuts while juggling the pen. I also habitually touched the mouse which then sends the viewport flying the second you put the tip of the tablet pen into motion.

Hey man I have this same issue. I understand its more of a workflow thing cause now there is a disconnect and you think about something you used to do without thinking. The best solution I have found is if you have a Logitech mouse or really any with programable buttons you just pack the mouse with as many useful buttons/ macros.(side note the G-hub software has a thing called "gshift" that sets a button to switch the rest to a different configuration effectively doubling the amount of keys you can bind)

8
How can I determine which drawing tablet is right for me?
3
Pixelling & animation: What is a suitable pen / stylus setup?
8
What are strategies for implementing drawing tablet into workflow?
0
Drawn lines have big jaws when using One by Wacom
3
Limit wacom tablet to drawing area?
0
With Krita, How to Create 'Pressure Sensitive' Circles and Curves With Brush Tool?