Is there a name for buttons with a thick shadow underneath?

I have been seeing a lot of these buttons lately. I think it's a recent trend. I would just like to know the name for it so I can explore them further. In this sprite image, the buttons on the bottom with that bottom border is the style I am referring to:

As I was reading this I was struck by the similarity of my keys on my keyboard to the buttons:

So I thought why not try a search on keyboard buttons. There has been a css stylesheet already created by Michael Hue, it produces buttons like this. https://github.com/michaelhue/keyscss

It's not a leap to say these could be easily modified to make them look like the image you provided, simply change the gradients, backgrounds, and add a CSS pattern using something such as Patternify

As others hinted, you shouldn't use a Sprite when these are easily to replicate using CSS-- which means you avoid an additional server hit for resources. I'm going to go out on a shaky limb here and call these keyboard buttons

Edit: Looks like we implement something similar to this on SE, I had no idea. By using the < kbd > tags you can wrap words in a similar version of the keyboard keys

It's a dimensional, 3-dimensional, or 3D button. It's not a new trend but it is more widely supported today without images ... which begs the question why is this done in a sprite sheet? Weird.

Scroll down to point 3 here for an example from 2011. And some from earlier this year here. 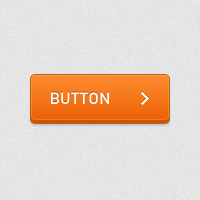 I've seen the top row referred to as 'microbevel'

I believe this is just a button made by someone who knows css3. Some borders, radius and colors. I have not seen a name for it anywhere either!

I'm not entirely sure it has a name, but the top I've also seen as microbevel.

Regarding the bottom row, It has become somewhat popular to stretch the bottom of the icon in an impossible shape. Not exactly flat design, but squashed design. See http://www.cameronmcefee.com/ for example of the github icon in similar style. I haven't found an exact name for the style, though it reminds me of an architectural projection such as Axonometric projection (http://en.wikipedia.org/wiki/Axonometric_projection) where 3D is impossibly stretched. Will update if I find a real name for it.

Orthographic Projection refers to the viewing of a 3D image where objects do not get smaller with distance. This means that vertical lines remain straight, and lines to the horizon are always parallel to each other.

Not the answer you're looking for? Browse other questions tagged website-design css button or ask your own question.

2
Clickable stickers sticking out of a notebook
1
Creating Rolodex-Style Flipping Numbers Sprite in Photoshop?
2
Where can I find a good repository of semi-transparent tiles for web?
4
How do I replicate these two effects in Photoshop?
10
Styling clean flat-design buttons so they show affordance, and look 'well designed'
1
What's the name for images like these?
2
Is there a name for this kind of website footer graphic?
0
How to create custom web background using repeating icon pattern?