Why is the numpad on a keyboard not designed to print typographically correct symbols?

provides calculator-style efficiency for entering numbers. The numpad’s keys are digits from 0 to 9, addition (+), subtraction (−), multiplication (×) and division (÷) symbols, …

… although all of this symbols are shown on the keyboard keys as you can see in the following German computer keyboard illustration from commons.wikimedia.org: 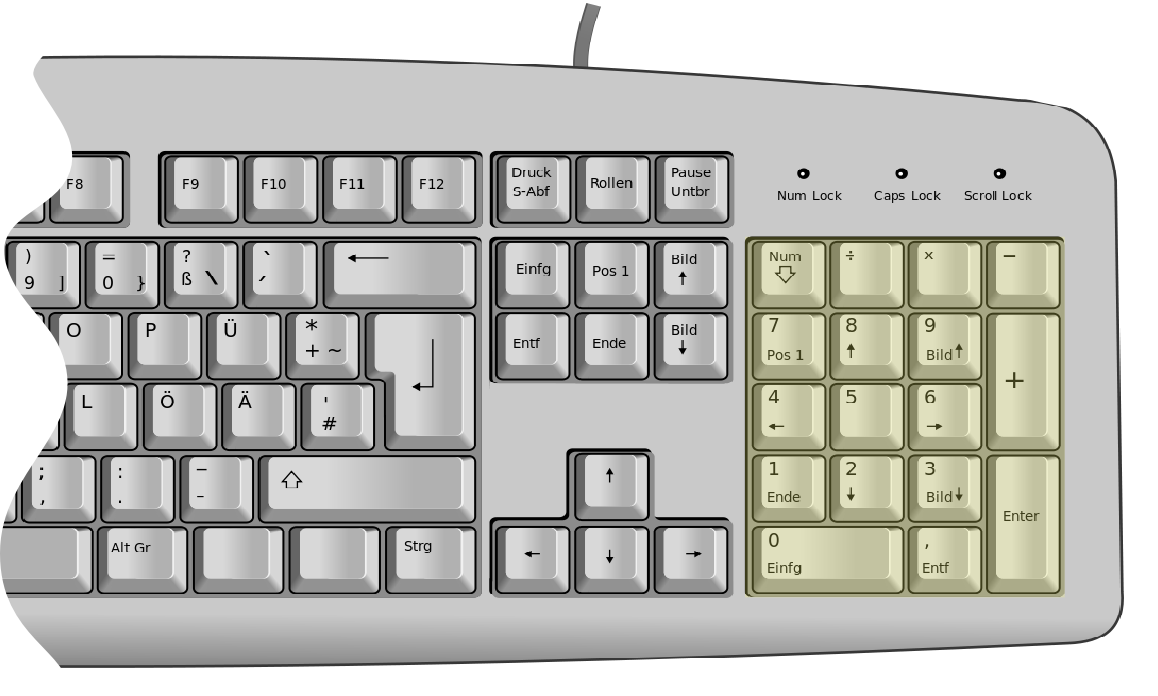 Is there any technical reason for this behavior – as @CAI mentions in his answer about the correct minus sign – or a is this only because of historical reason?

Historical reasons only – plus a side dish of "backward compatibility".

The original PC keyboards were very much 'typewriter-like'. Also, in the original ASCII set there were no 'fullwidth plus', 'minus', and 'multiply' symbols. The common MS-DOS 'extended ASCII' set contained a proper 'divide' – but only in certain codepages. (Only a guess, but it can be assumed the asterisk was chosen for 'multiplication' rather than × because it would look too close to the lowercase character x.)

Since lots of computers were used for administrative purposes only, the calculator-like keypad addition appeared later on. Initially it doubled for use with the arrow, page up/down, and home/end keys; later on, these in turn appeared as extra extra keys. The labeling on the keypad keys duplicated those of calculators at that time, but the character they typed had to be the same as the original ones used, for compatibility with existing software and for keyboards without the extra keys.

The key caps reflect what the keys insert into programs to do the function they describe. It’s quite similar to pressing a key labelled "Backspace" and expecting that literal text to turn up.

It’s not the only peculiarity of standard keyboards. Most have All Caps letters printed on the keys, but all of the computers I know start up in lowercase mode, and it takes an extra key (Shift) or software mode (Caps Lock) to actually enter uppercase characters.

Not the answer you're looking for? Browse other questions tagged history hardware character or ask your own question.

18
What’s the right character for a minus sign?
0
Why not use space-hyphen-space instead of the em dash?

13
Why are there so many Unicode symbols for cats?
21
Why do most of the well known currency symbols have strikeouts in their symbols?
18
What’s the right character for a minus sign?
13
What are the origins of the commercial minus sign (⁒)?
2
What is the technical term for a replacement character if a font does not have a representation
6
Why is Courier the preferred font in the legal industry?
19
Why is the effect called Dodge?
0
Who designed the Life Magazine in 1936? Who was responsible for the whole visual look of the magazine?