I'm designing a poster for a lecture about hostage negotiation. It's a dark, glitchy design, with lots of information on it.

I think the title looks OK but I can't seem to balance the rest of the information right. It just feels too busy. Does anybody have suggestions for this design? I'm not asking to design a poster for me, just small sugestions so I can make this better. It's just feels a little off and it's bugging me. 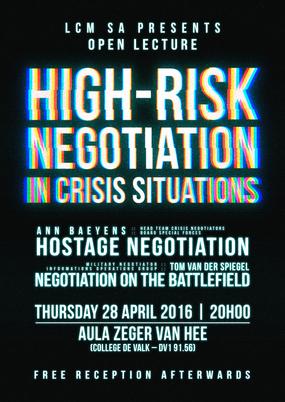 The centered text isn't the problem. (although it could be argued that putting everything centered is a bit bland)

(exagerrated example. This is too bold, making the righthand lines slightly too heavy)

Order influences how much we notice balance

All of this is made more noticeable because you put the speakers before the title; making the imbalance the topmost part of each content block.

I am not entirely sure why this is the case, but we tend to interpret ◤ shaped text block more stable than ◣ shaped ones. I think it's due to a combination of (western) reading being LRT and TTB, as well as 'soft' materials (think: tattered banner, weeping willow) being able to form those shapes draped down, but they can't stand upright.

Anyway. Flipping the speaker info and the seminar title makes a big difference. As a bonus, it creates a slightly nicer information hierarchy in both reading order and text size. 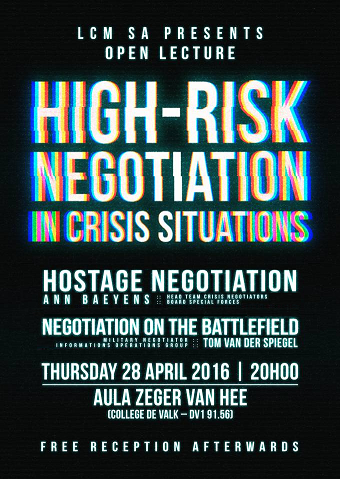 There still is some imbalance by having names left and right, and because of the font density. But its effect are largely mitigated.

I noticed that your margins are not quite the same. I don't mean between the conference title, I mean on the sides of the seminar blocks. You'd want the H, N and T to line up on the left, as well as the N, D and 0 on the right, to line up nicely.

Keep in mind the letter spacing of the names; A N N is spaced very wide.

Not the answer you're looking for? Browse other questions tagged adobe-photoshop critique posters or ask your own question.

1
Design critique for 36" x 24" poster announcing coffee shop re-opening
0
Simple watermark logo for photography
2
Critique: Poster for event on Friday the 13th
8
Critique: logo design for an engineering company that makes machinery
3
What design options can I go for when fitting a lot of content in a poster?
2
Critique: iPhone Repair Poster
1
document size in Photoshop vs Illustrator
3
Design Critique poster
10
How to politely accept colleagues' critiques without implementing any/all of it?