Subtract overflowing group of shapes from shape in Sketch

about a month ago I switched to Sketch for webdesigning and I'm a very happy camper ever since. I really love the program and for me it's a big improvement from webdesigning with Photoshop/Illustrator, especially on a workflow level.

There is one thing where Sketch just keeps giving me a headache though: combining shapes, in a way that goes beyond one time time subtraction/union/etc of two fills. Starting this topic I couldn't finish the following task, but during the writing I did manage it. Even still I would like to post this, since the solutions I found are quite cumbersome, considering this task would be relatively easily done in Illustrator.

So here's the challenge: I have a shape, i.e. a rectangle, and from this rectangle I would like to subtract a logo, which is a group of simple shapes:

Let's start with the most likely way to do: subtract the whole group. This doesn't work, but Illustrator doesn't like these kind of actions either, so no hard feelings. Here's a screenshot of the result:

So let's subtract shape by shape. Let's start with the circle. Subtracting just the stroked circle from the rectangle doesn't work, which is too bad but still in a way forgivable, since it's not outlined. But, after outlining the circle and then subtracting, the result doesn't look OK.

This is where Sketch should do better, imho. I've found a workaround though, which you'll find in the answer underneath this post.

So far, so good. But now the three rectangles. If you subtract the stroked rectangles, the result is odd. Please see my answer for the workaround.

So after a few cumbersome workarounds it worked, which is good of course. My conclusion is that Sketch has a hard time:

I hope I revealed the problems I'm having with Sketch. Also I hope these problems can be overcome, other than with the workarounds. I wonder if you are having the same problems and if there are any real solutions. It should work just as neatly as the pathfinder tool in Illustrator imo. Normally I wouldn't bother to write such a big post, especially not after solving the problem myself, but because I think Sketch is such a good app I put in the effort to state my problems here.

The subtraction of the inner circle can be reset, giving this result:

(Btw, this only works after removing the circle from the group, or else Sketch just subtracts two circles from the rectangle at a different spot) As you can see, it kinda works, but there is a whole part of the inside of the circle again that is flowing outside of the boundaries of the rectangle. Annoying, but the workaround for this is to mask it with the rectangle: 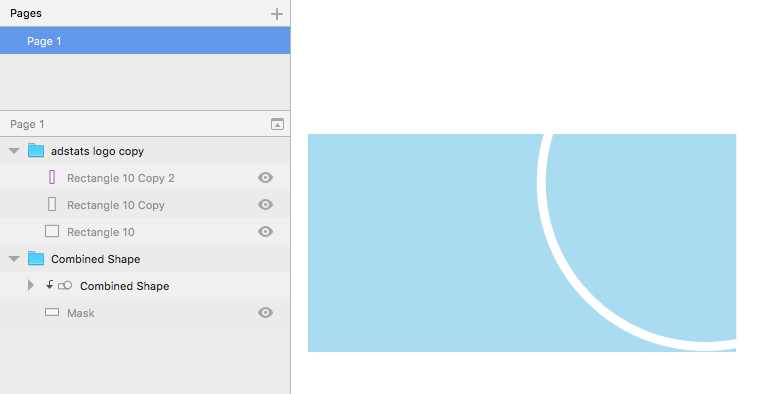 The solution for the stroked rectangles: Get them out of the group first and outline them. The problem is that the inner rectangle get's extra anchorpoints after this, seen in a later screenshot below. Rotate the shapes to the lines are vertical and horizontal, so the extra anchorpoints can be cleaned. The rotation can be done again after the subtraction (since the subtraction is non destructive, which is a lovely feature). They should be ungrouped too, or else the coordinates of the shapes change after subtraction.

The filled rectangle works fine. But problems arise after subtracting the stroked rectangles. After outlining the stroke, the inner rectangle has become weird, with extra anchorpoints. This can be cleaned, giving almost the acquired result. Now you can rotate the whole combined group. After rotating you can expand the big blue rectangle so it fills the mask neatly, et voilà ...