I am printing out a brochure design that will be on double sided linen paper (pictured below): 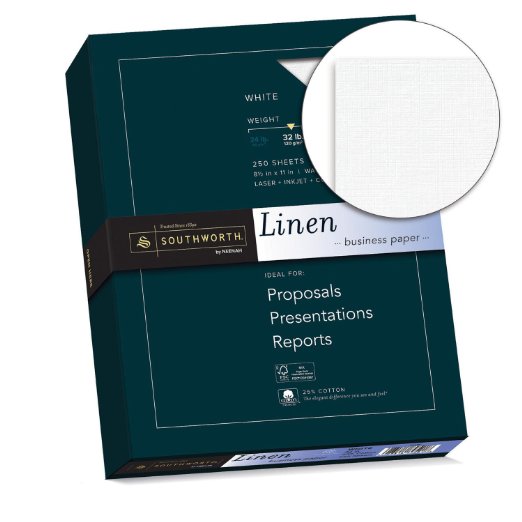 However, the linen texture is definitely more pronounced on one side over the other. I have asked around at a few paper suppliers and nobody seems to have a solid answer for me - is there such a thing as double sided linen paper for printing?

The texture you're talking about comes from the screen on which the wet paper slurry is poured, allowing the majority of the water to drain away. It comes in two basic flavours: laid (most of the wires in the screen go only one direction, usually horizontally across the page, with only a few wires going the other direction) or wove (more like window screening). The rest of the process involves squashing the formed sheet of paper flat, removing that screen texture to one degree or another. It's not something that's impressed in the paper after it's a sheet.

The only standard papers that have a definite texture and more-or-less the same texture on both sides are rough and cold pressed heavy papers, such as you'd use for watercolours. That texture comes from felt blankets used in the wet squeezing process, and is quite irregular and lumpy rather than the regular texture of a laid or wove screen.

You can get decorative craft and cover papers that have textures on both sides, but they tend not to be white-ish and not terribly printer-friendly.

Instead of shopping at a place like Officemax / Amazon if you want something quality and specific then go to a higher end paper company like French Paper or Neenah Paper.

If they don't have what you're looking for they can probably help you find it or craft it for you. An alternative is also looking at a high end print shop like Mama's Sauce that can do Duplexed and Triplexed paper.

32
RGB and CMYK: Why both?
5
Double sided letterhead design with heavy ink coverage on the reverse
4
How do I print my book using Indesign cs6 and have the pages come out in the right order?
1
How to print a double-sided, tiled print from an InDesign file?
2
I want to print a double sided BOOK not booklet that is 200 pages long
2
How legible is a right-aligned same-line header compared to a more conventional left-aligned separate-line?
0
InDesign: how to setup a document for printing double sided, cropping off 1 inch