Do formatting (invisible) characters have a name?

In typography, some text editors will offer the option to display "invisible" or "formatting" characters such as these: 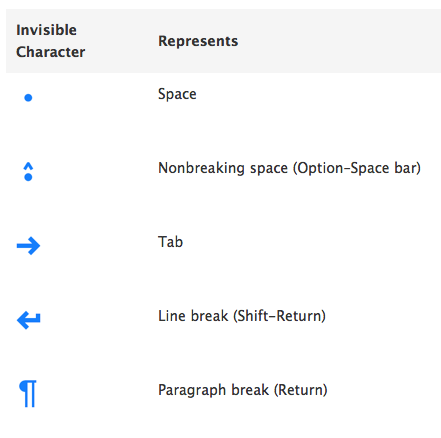 Do these have a name?

I mean, of course you could call them "bullet" (the first one) or "tab" symbol (the second one), etc, but I am thinking that they might have a special name for this very particular typographical use.

The only one I could find while searching through Apple's Character Viewer is "Pilcrow" (the "paragraph break" sign), but its Wikipedia page and an online search didn't help me in fining the names of the other ones when used as formatting symbols (I'm especially intrigued by the symbol used to represent the Nonbreaking space, which looks like a bullet with a circumflex accent).

From your question, the general category of characters or symbols that you are referring to are called Whitespace Characters.

Whitespace characters are the representation of any character that causes a horizontal or vertical spacing change in typography.

In the case of the characters you are asking about specifically. These are a symbolic set that Apple chose to represent the whitespace markup for their system. Different OSs have chosen to represent some of these characters differently. This is typical of systems that don't understand where these symbols came from in the first place.

The second one in specific is the Nonbreaking space, and was chosen because the classic proofreading markup for a space was a #. Since the # character is a real character and used in computer designations, a newer character had to be created. On some OSs this is represented as a larger dot with a smaller dot above it, rather than the caret or circumfex symbol.

In terms of old school typography the character is the Em Space. The em space is a nonbreaking space equal to the width of a typeface's point size. It was derived from old typesetting where a blank metal block who's width is that of a capital M was placed in a row of text. This is also where the HTML/CSS designation for an "em" character sizing comes from. 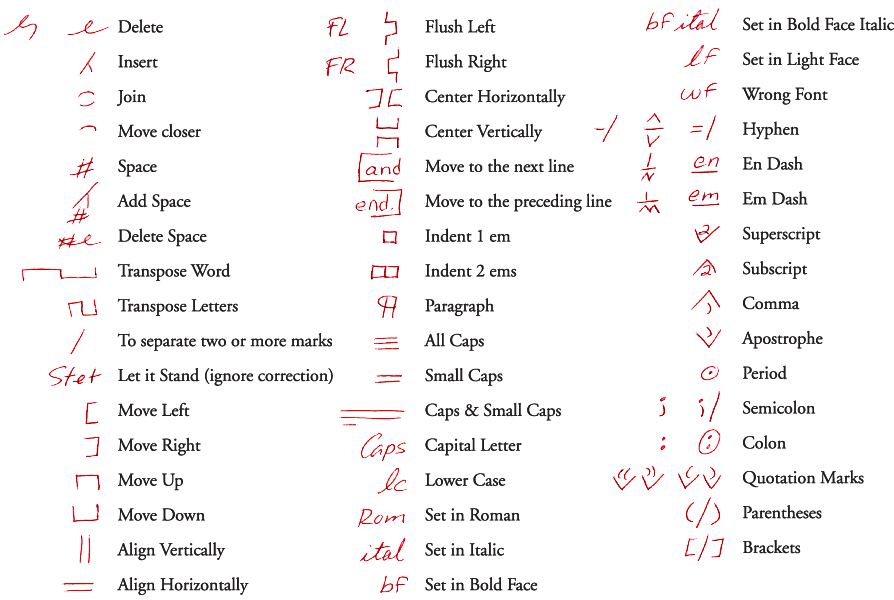 Not the answer you're looking for? Browse other questions tagged typography text typesetting symbols or ask your own question.

4
How can an Icon symbolize "Search Relevance"?
7
In typography, what is an open counter?
2
Is there a symbol that means "purchase" across cultures?
14
What are the origins of terms "em" and "en" as typographic units?
21
Why do most of the well known currency symbols have strikeouts in their symbols?
2
Formatting: left aligned vs. justified body text?
5
Typographers' "canon of exemplars": What are some books that typographers think are examples of great typography?
5
What is the name of this extinct type symbol?
3
Typography/Character ID; Semicircle with bracket