Do paths in Adobe Photoshop have to be closed?

I am working to convert a png to a vector graphic. I am outlining the image using the pen tool. Photoshop insists that the pen tool produce closed loops in order for me to use the "Stroke path..." tool. Why is this?

I assume you're stroking a path by selecting a bitmap layer, then opening the Paths panel and using Stroke Path from the flyout menu. 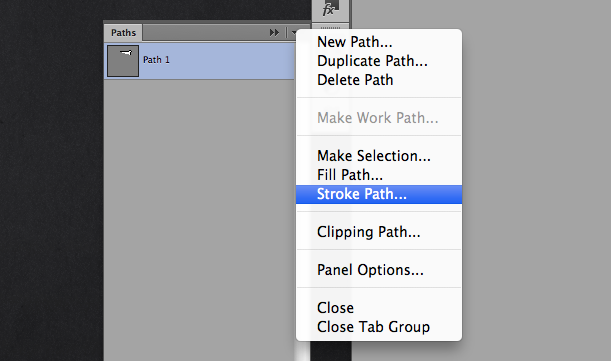 If you have an open path, the result will only contain a stroke on the actual portion of the shape that is connected. So that's no good for what you want (although it is easy to close a path using the pen tool). This behaviour is the same as Illustrator's strokes.

If you use a the new stroke feature in Photoshop CS6, only the portion of the shape that is connected will be stroked. Again, this is the same behaviour as Illustrator.

But... if you use a layer style stroke, the entire object will get a stroke, even if the path isn't closed.

So it depends on exactly what you need the path for, but there's certainly a way to have a path stroked around the entire object, even if the path isn't closed.

Photoshop can be a great way to trace bitmap images to create vector paths. Once you're done, you can export the paths to Illustrator, if that's where you'd rather have them (they'll be unstyled though).

1) If you really want vector, you should be using Illustrator.

2) You can stroke open paths easily by highlighting the path in the Paths panel, then switching to the Brush or Pencil tool and hitting Shift-Return. However, Stroke Path.... from the Path menu works just as well with open paths.

I'm not familiar with any "stroke path tool" in any application.

1
How to stroke an open path (vector)

6
Is it possible to control layer order in an Illustrator stroke?
3
How to fill a shape in photoshop and avoid white lines
6
Photoshop: create open path with the Pen Tool
0
How do you add weight to strokes in Photoshop? I see the option but no results
2
Photoshop CS6 Pen tool suddenly refuses to 'Stroke' 'Fill' or 'Make Selection.'
3
Photoshop: edit closed stroke path
1
A tool on line to convert an image to vectorial or using Adobe Illustrator: best practice
6
Crop closed paths into open paths