This image below shows a few lines from the July 1948 Bell System Technical Journal. 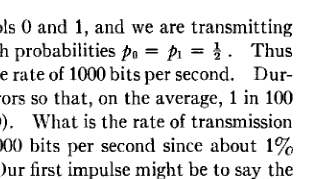 The 'p' character in the second line, used to typeset the "p0 = p1 = 1/2" equation is the character in question. The entire document should be available as a PDF here (14Mb). That particular equation is on page 29 of the PDF, but it is used in equations throughout.

I've tried WhatTheFont on both the isolated character and a bit of running text, and didn't get anything sensible. (I can't post the links to the images I submitted because my reputation is too low). The biggest problem is that the character is used only in equations and not in the running text. Sometimes there are special math characters for equations but usually it's just the italic version of the font. I'm hoping the way the top of the character extends so far past the stem will make it easier to identify.

Ideally I could find a (nearly) matching italic font from this LaTex catalogue, but just getting a name would be a great help too.

It looks an awful lot like Caslon Italic. There's many many versions of Caslon, so some might be closer than other.

There is a version, Libre Caslon, in the LaTex catalogue

Not the answer you're looking for? Browse other questions tagged fonts font-identification font-recommendation history or ask your own question.

10
Help me find a font that looks something like this...
1
Find the font from a single character
1
Trying to find a font to match a logo
3
Google Font with closest match to Adobe-Clean
1
A good monospaced font to go with Computer Modern font
2
Help me to find a specific category of typefaces