Need opinions on the type of column

I am preparing some web CSS styles.

I have this layout:

For all thoose with a print design background, we can consider that we have some margins on the section (Red) and some internal colums with a small space arround it.

I can play with this layout a bit, I have a blue overlay marking the original blue column:

The first question is Which of this 3 ways of arranging a photo would you most likely use?

And one aditional question is if This next layout sounds logical to you?, which is diferent from (2) but more suitable to fit the option (C)

I found this question unanswered and after seeing some errors and no answer, here I dare with mine.

The editorial design consists of several parts, I will refer in this answer only to the two basic elements of the question: the page structure and the layout

In this case it's very simple: typographical frame and its partition.

As the internal partition is wrong, all your page examples are unbalanced. I describe them in the next point, but following your example.

At the example layout, the text column is centered on each partition, which causes four unequal margins (a, b, c, d) across the page and a general breakdown. If instead of using the partition joined by the extremes, we follow the margins generated (blue lines), we obtain a balanced composition and only two margins sizes (a, b, b, a): 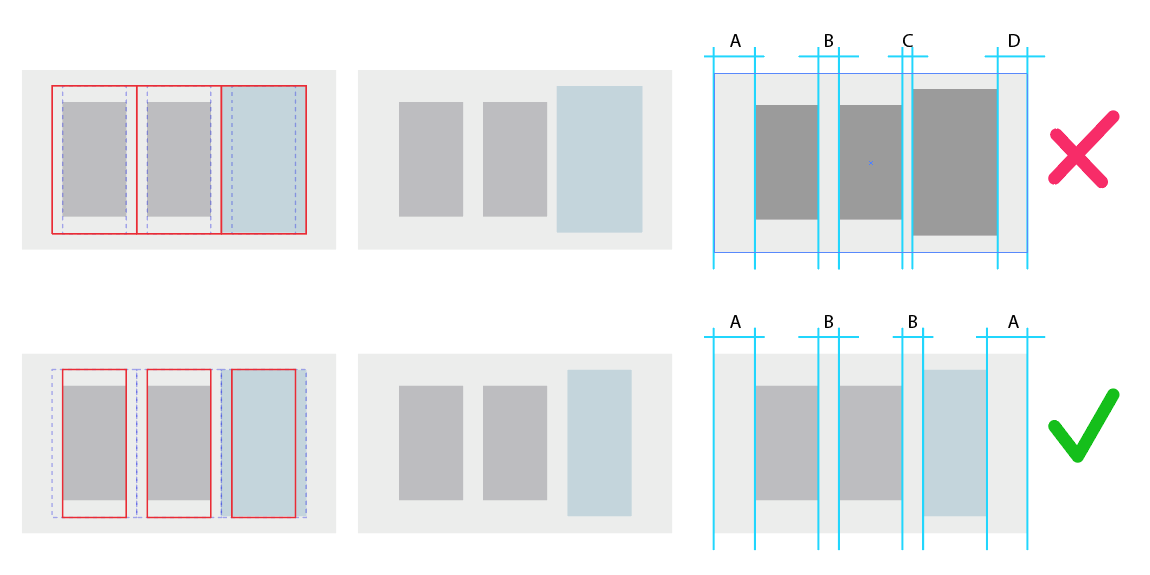 The same situation in the examples with the bleeding images, where the third option visually gains by eliminating one of the margins:

There is a visual and compositional trick that allows designers to break the structurality imposed by the margins and is the use of silhouetted images. Using the question examples, see how the image breaks the margin effect with the text making it practically disappear. With this we gain in visual power and we eliminate one of the partitions.

Answering your question and after fixing the structural problems, the decision of which of all the possibilities is the best is based on opinions, since we don't know the conceptual content of the page. After the fixing, any one is valid. At graphic level, my decision would be between these two:

Not the answer you're looking for? Browse other questions tagged css critique layout or ask your own question.

2
Spacing nav menu type
2
Need help with newspaper magazine design/layout
0
Critique: how can make this 3-column dashboard design flatter?
7
Feedback on the design of a physics document
0
What is the natural aspect ratio of a 12 column grid?
3
Is there a name for the type of photography or layout where items are arranged on a grid?
1
Need help making my logo stand out from the background
0
InDesign: Multi-column text frame
2
Line lengths on paper for a resume layout