While aligning objects in Adobe Flash how to decide what object moves?

So this is a problem that should be easily solved but I'm having a hard time figuring this out in flash. When I align two objects I just want one of them to move while the other remains stationary, but how do I decide which object shifts and which stays stationary. In Corel that depends on the selection order, in Illustrator the object that remains stationary is decided by clicking on that object again after selection and in Photoshop we can just create a selection around the object, but none of those seem to be working in flash, and I've hit a wall because I'm unable to find a solution to that anywhere online either. 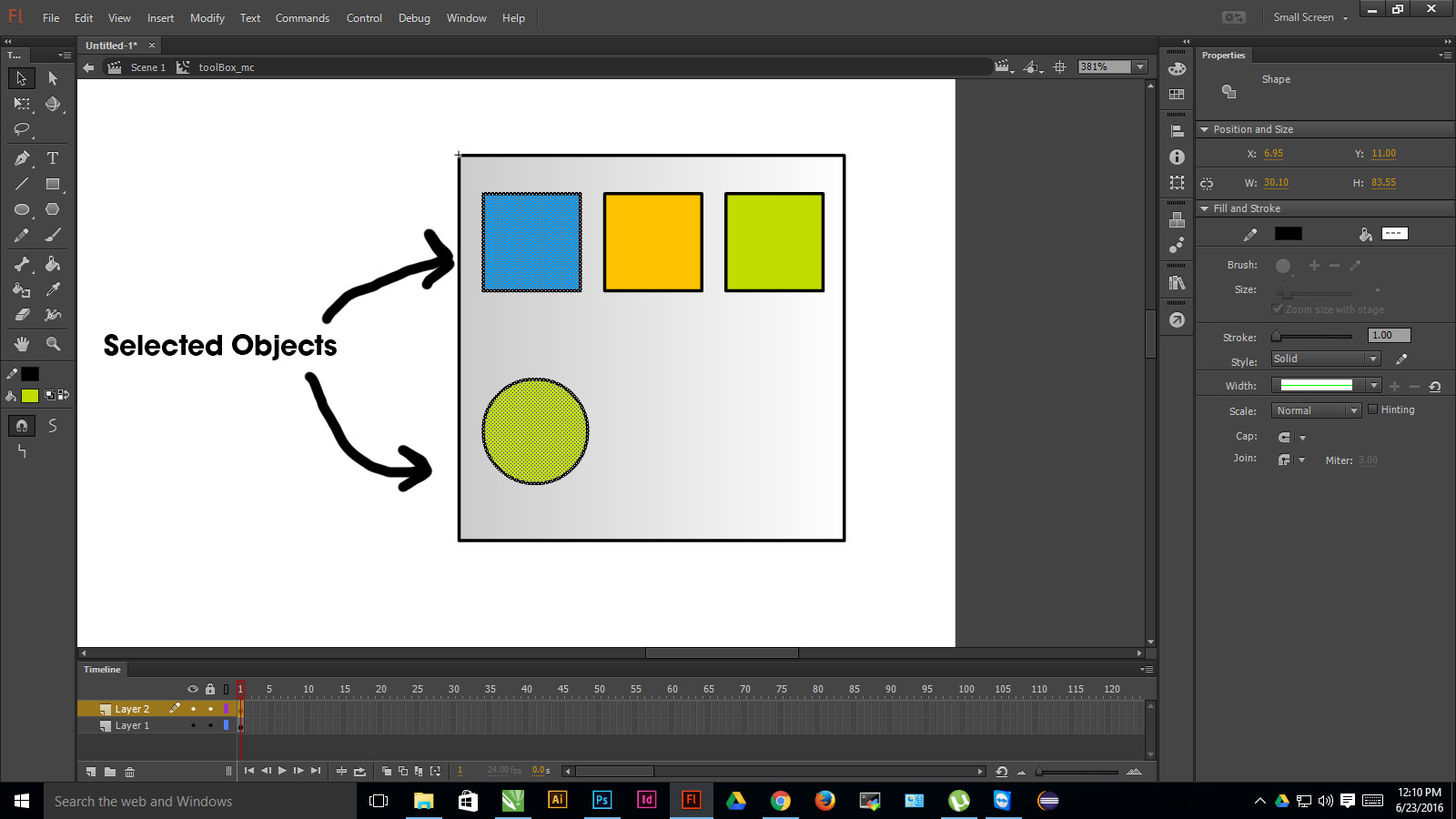 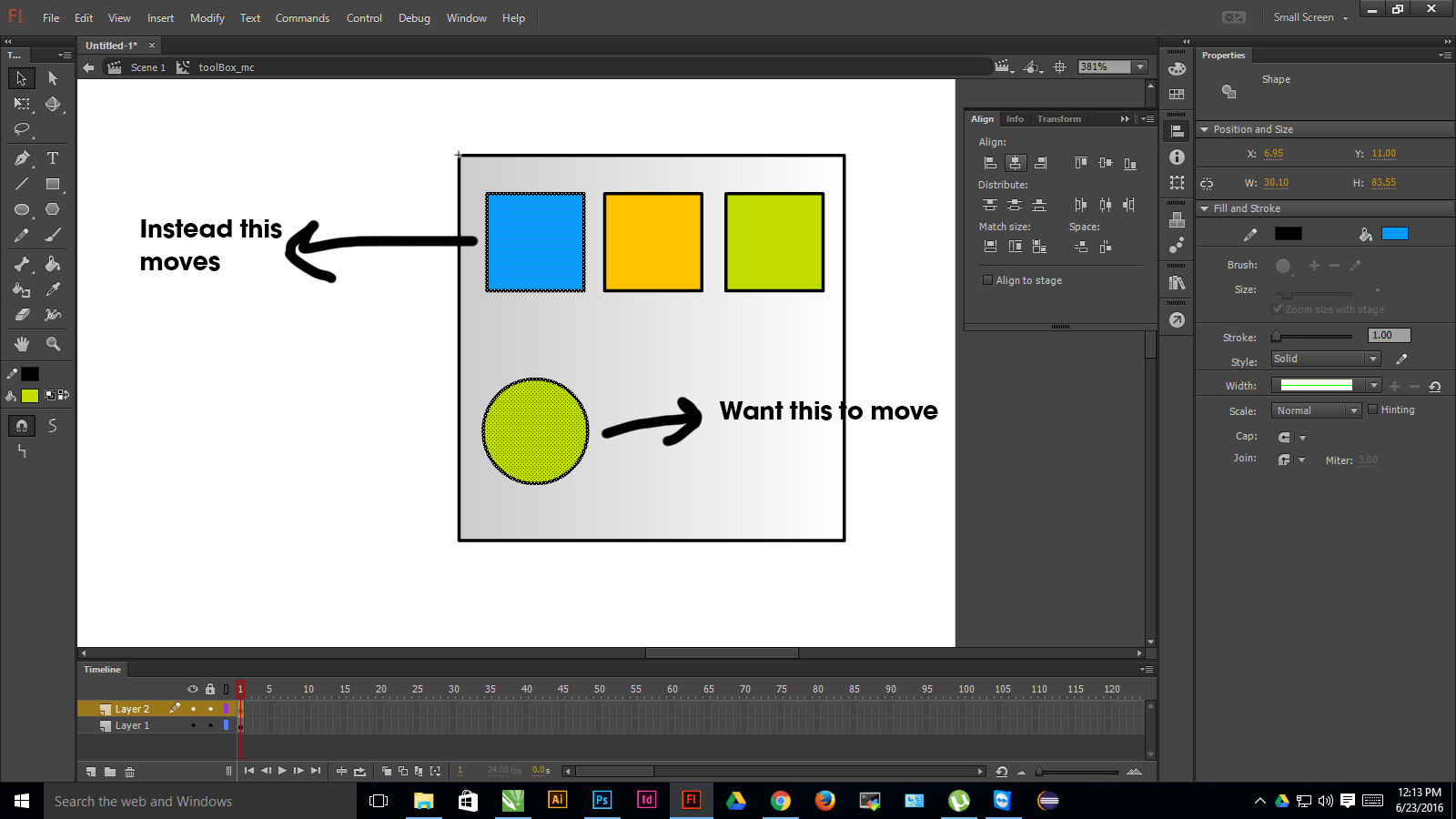 I think the problem lies in your alignment panel selection try to uncheck/deselect align with window or something similar I can't recall, but its at the base of alignment panel...try it.

How to keep one object stationary in Flash / Animate while Aligning? Unfortunately, you cannot force an object to NOT move; but you can count on an object not moving if you use certain modes of this Tool: Align Left, Right, Top or Bottom. Using these modes, only one object (of two total) will move (respectively): the right-most, the left-most, the bottom-most or the top-most. One object will NOT move, because it possesses the edge you are aligning everything else to- that's the object you can count on to remain stationary.

For example, when I need a bunch of stuff aligned to the left-most edge of an object I want to stay put, I'll select everything I want, de-select my (dummy) "key object", and drag everything to that "key object's" right. Then I shift-select my "key object" to include it again in my selection set. Being that everything is to the right of that object, when I hit Align Left, I know every object's left edge will align... and the object all the way at the left of all the objects won't have moved, because its edge IS the Left edge everything else is aligning to.

It does take some getting used to but there's no easier way to do it until Adobe makes Animate more similar to Illustrator or InDesign. Just take a second and decide which object (and which of it's edges) is going to be your reference point. After thinking like this for a while you may begin to find yourself creating in a non-linear fashion, knowing that Aligning will need to be done after a particular object's location is fairly set / permanent. Or alternately, Align first, then move all of those objects at once to preserve the aligning you just did.

Not the answer you're looking for? Browse other questions tagged alignment selections adobe-flash or ask your own question.

0
Adobe Flash: how to draw a grid?
0
Adobe Flash How to change path after changing timeline etc (no tweens)
0
How to create transitions in adobe flash?
1
Illustrator: Selecting all objects across x axis
0
How can I justify paragraph text in Corel Draw and make the bottom line aligned right (not left)?
0
How do I fade in an object which is rotating - Flash
1
How to browse the code for adobe flash animation
5
Adobe Illustrator: strange behavior while aligning objects
1
How to increase resolution in Adobe flash