Using InDesign, I am trying to make my multi-column justified text homogeneously spaced, i.e. the inter-word spacing equally distributed across the entire page (or article).

As you can see below, the text is a total mess : there are different inter-word spaces, even in the same line (for example, compare the space between the 1st and 2nd words of the 2nd line, and the one between the 2nd and 3rd words of said line) !

How can I fix this ?

You can, by changing InDesign's default Justifications parameters. However, you should not do nor want to do that.

Starting with replicating your result: 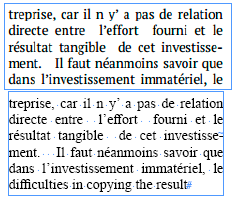 – this is 11/13 pt Times New Roman in a frame 60.5mm wide –, I found I had to insert multiple spaces in exactly those places in your "total mess". In modern typesetting, entering multiple spaces in running text is not only not necessary (in HTML, for instance, the default is any amount of spaces is equal to exactly 1), but as you can see it messes with the built-in justification algorithm.

By changing the allowed word justification limits to Minimum 100%, Desired 100%, and Maximum 100%, you can force InDesign to not change the space widths. Since apparently (and weirdly) you still want your text fully justified, you need to allow either intraword spacing differences (the letter spacing) or glyph scaling (or, as it is, a combination of the two). Just for laughs, I set the Letter Spacing to -10%, 0%, 10% and got this result:

This is what you asked for: all of the spaces have the same width, and the text is justified. Some of the interword spaces are larger than others, but that is because there are more spaces in those positions.

I could stop with this because it is what you asked, but I started out with telling you really should not do this. The proper way is:

With the Justification settings left at their defaults and with all of your double spaces removed, your snippet of text looks "just right" to me:

Edit: It's not impossible per-se. But impossible without changing some other spacing (which you probably don't want to do) (see Rad Lexus' answer)

You can't. It's impossible.

If all the spaces were equal you would no longer have equal line lengths (i.e. not justified). There is no way around that.

The justification options in your paragraph style (Word Spacing to be specific) will help you a bit, but there is no way to make the spaces completely (or anything that close to) equal.

Not the answer you're looking for? Browse other questions tagged adobe-indesign text or ask your own question.

1
Text Alignment Issues When Opening Adobe Illustrator CS5 File in CorelDRAW X6
18
Readability and appeal of justified text
2
What is this "justified" text technique called?
2
How to make Word 2010 Justified like adobe InDesign?
2
Where exactly is text aligned in terms of the edges of the text?
0
InDesign to Word: Issues with spacing when editing Word document.
3
Is there a way to spread a paragraph over all of a text frame's columns in InDesign?
1
How does unobviously uneven spaces between words in justified text affect reading?
4
When should center align paragraph text be used?