Can it be considered artistic freedom to caricurate (social) media logos for a print publication?

I'm working on a graphic for academic publication. In that graphic I would like to refer to the concept of social media, ideally with the logos of (for example) facebook or twitter. According to their guidelines (Facebook, Twitter) it is perfectly fine to use their brand identity in form of a non-altered logo. However, this does not fit the graphic style I'm working with.

Can it be considered artistic freedom to modify these logos to relate to my style? Or - rather -, can I create objects that may be very different but clearly refer to these social media platforms? The reader of the graphic should not necessarily think, "Oh, this is facebook!", just get an idea that I refer to the concept of social media or different formats of media in general.

Here is a doodle of what I'm talking about. 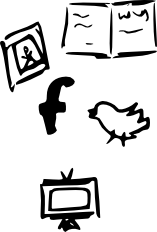 Clearly, the bird in combination with a tv-set, a picture and a print publication (and possibly a caption stating "media") refers to Twitter. But on the other hand it is just a bird, sandwiched between a newspaper and a television.

You're fine. This is identifiable reference for the purposes of commentary, critique etc. Given these companies have used a newish medium and created much of their identity and referential existence via their logos and colours, there's little else to use to identify and reference them... so the logo is it.

By contrast, Coca-Cola has it's bottles trademarked etc, and some of them are almost as identifiable as their logo elements. There's no equivalent with the social media services. You want to make a visual commentary on their relationships (or anything else about them) and you need to use their logos to do that.

So it's not only artistically free, but a free form of expression covered by all the rights you've come to know and love. You could, quite rightly, use their actual logos, given the context you've described, and it would be fair use, too.

Not the answer you're looking for? Browse other questions tagged logo copyright branding academic-publishing or ask your own question.

8
How can I use Creative Commons-licensed media in print?
5
Is it bad practice to use non-brand fonts in ads?
4
Can you protect social media iconography?
1
Client communication problem re Logo and Branding
5
Logo for social martial arts project
5
At what point can an image be considered "redrawn"?
2
Should I focus on dimensions or proportions, when creating a logo?
18
How to ensure international logo can be ethnically neutral enough so it won’t be offensive?
1
How to mention the author of an artistic infographic?
1
Critique request: Logo design for anime related products