Why color grade with limited green such as in Stranger Things?

The phenomenal Netflix original Stranger Things does almost everything for a very specific reason. If you watch closely like I do you may have noticed the color grading. Greens are very limited in the set designs, costumes and grading - often not present at all. 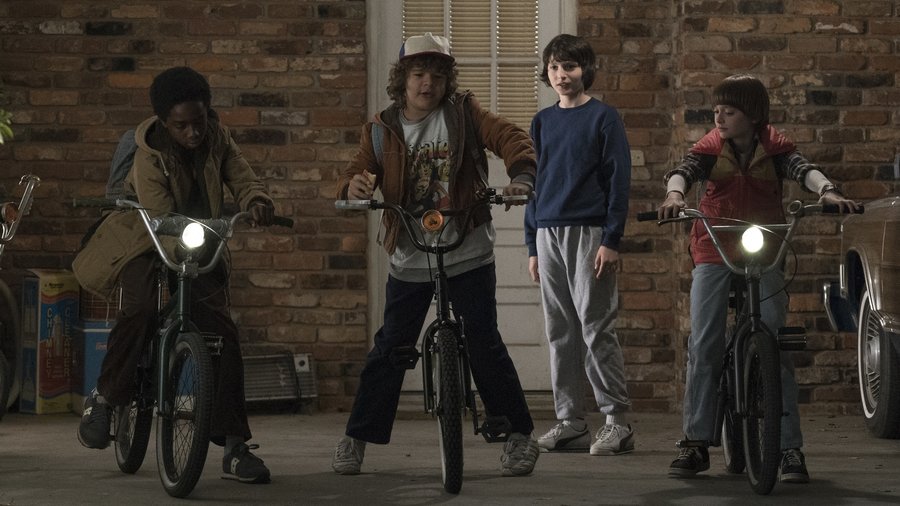 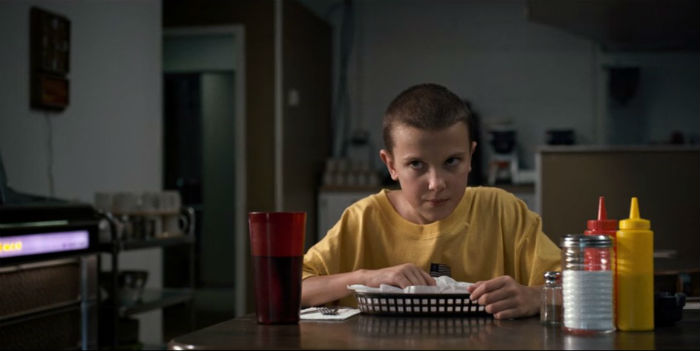 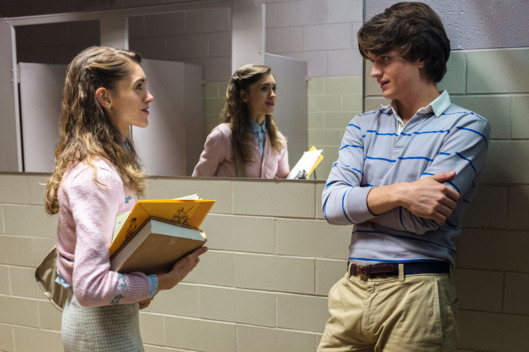 What does grading with a limited green palette achieve and evoke? I know in comics like Batman limited green is used for emphasizing night but in photographic elements like Stranger Things I'm not sure what it achieves? Does it have historical roots in a particular type of analog film?

I have just barely seeing the series...

What does grading with a limited green palette

But the very first scene of the series is... Green-ish! 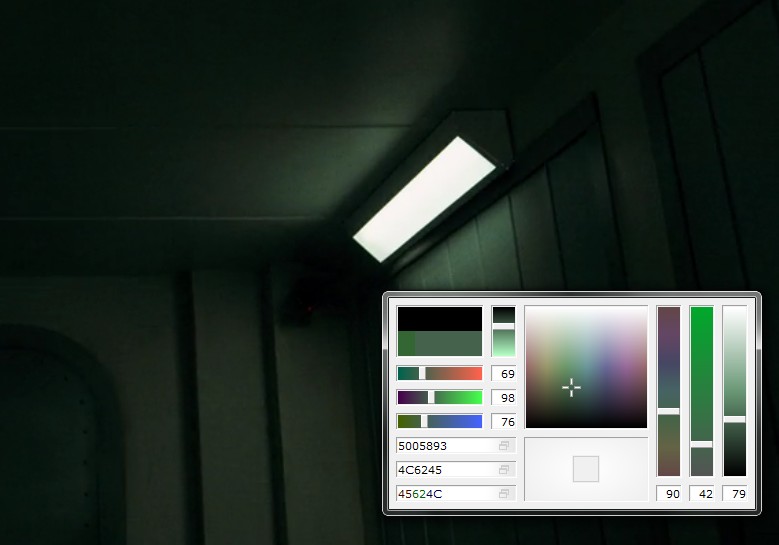 Let us just concentrate on the color grading.

Color grading in images, and specially cinema is a tool to evoke a mood, a feeling, an ambient.

Contrary to we might think we do not have thaaaat much variety of color gradings. A grading is a tendency to a region of a chromathic circle.

In my opinion we have 3 main regions, Warm colors (yellow to red), Cold (cyan to blue) Green (lime to turquise) and a secondary less used purple region. 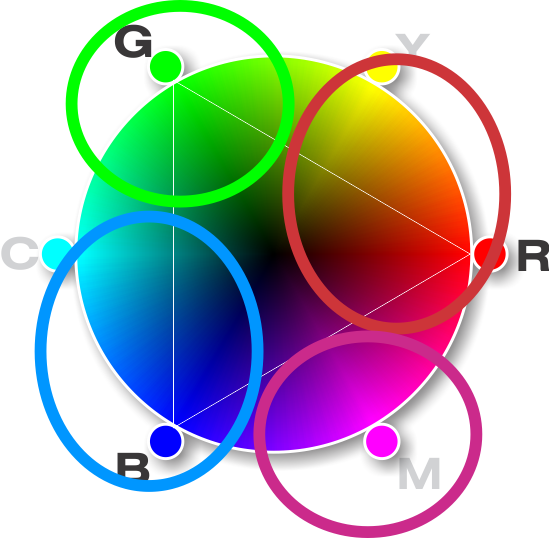 So, what some grading can represent? The first two, are easy. Temperature. Depending on the context this warm or hot temperature, and a good one or a bad one (A Mad Max desert or a Baywatch beach)

Ok, the green one... In Matrix it is very clear that the green grading is when the action is taking place inside the matrix.

But in real life, green "ambient" is asociated with health institutions, hospitals, but more specific with old mental institutions. The color theory on the victorian era was that green was a calm color, evoking grass and nature. But a dark green gradient now is a iconic color of people lock down and crazy.

But what about a non saturated color?

The grading is also about non saturated colors. You do not want to see a happy mood here, but a psychological troubled ambient. The choice is obvious. Lower saturation, lower brightness.

I also feel that the grading is not just to green, but also to blue. Cold+Night=Mystery.

And about the sets and props?

The basic idea still remains. Green = Nature... at least in planet Earth. If the series is not about Nature, but super-natural... you want to step off the most obvious color in nature: green.

But I do not see that proportion too diferent.

How many green shirts (besides a very specific institutional shirt, like a University shirt) do you have?

What I feel lacking of is again, saturated props.

This is just my opinion.

They wanted to create an immersive vintage feel to the tv series.

"Part of the essential friendliness of ’80s sci-fi came from the softness of analog film: Stranger Things, shot in 4K, gives us a decade edgier than we remember. The aesthetic is a perfect blend: old-fashioned real sets (or least, little flagrant green-screening) and restrained color grading that stops short of blue-orange blockbuster smears, all pictured as precisely as digital cinema is capable of.

In movies they can mimic the analog "color range" to give a vintage look to their production. On prints, we associate the lack of blue with vintage because unprotected pictures/prints that were exposed to the light for years lose their blue color first and seem to become more yellowish/reddish.

Green more than any other color creates a sense of daylight and nature.

There are two times when Green is extremely lacking:

So Batman for example is largely lacking in greens because it helps to establish a nighttime feeling. In Science Fiction its part the night time but and part the unearthly. This isn't always the case, there's certainly some science fiction reasons to maintain greens. But in general green is one of the main things changed when coloring a piece in science fiction.

The primary colors of the future, according to modern cinema, are blue, brown, and creepy.

At least 50% of the sci-fi look is created in post — more specifically, in the color suite. Once again, there isn’t a single approach that’s going to work for all sci-fi films, but there are some general principles that seem to work in the majority of films in this genre. One of which is the use of cooler tones.

Many sci-fi films take place in unsettling environments, or in some cases, even dystopian societies. Warm color palettes are generally going to lead your audience to feel more comfortable, which can be counter intuitive to the genre in many respects. Cool blues, purples, and cyan tones will go a long way in creating an unsettling feeling for your viewers — and don’t forget to add a touch of desaturation too.

But this isn't even really new in Modern Cinema. Nor, is this exclusive to Cinema. This is color grading in general whether its an advertisement for print, a website, a graphic novel, or a movie.

In 2001: A Space Odyssey green is almost entirely lacking until he wore a green helmet to shut down HAL and then the Stargate and finally the end which still limits green: 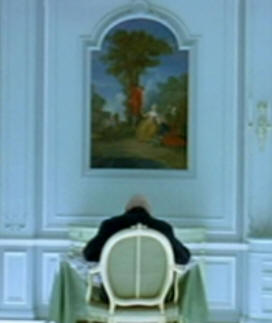 It's nature, its calming, its a sense of humanity again.

A lack of Green is almost universally governed by these particularly within the science fiction genre. Are there exceptions? Absolutely. There's entire realms of science fiction that are the whole "nature overtakes the planet" where Green would make sense for example. But in general limiting the greens makes the world feel more uneasy and unearthly. It always feels like it could be just dawn or nightfall or even dark out.

Not the answer you're looking for? Browse other questions tagged color-theory design-principles or ask your own question.

2
Systemetic way to choose a good red & green color for dark grey background
28
Why is pure blue darker than pure green?
1
Dark UI Design: Why tint the dark gray colors with a different (primary) color?
8
Are spot colors limited and why CMYK mix is not treated same as spot color mix?
0
YCrCb colorspace: why does it contain only blue and red color information, but not green?
0
Scientific methods to obtain perfect color gradient between red and green for scale
11
Good-to-Bad color scale without green