I am well versed with Photoshop and how it works. But recently, I decided to make a poster for my home and for that I'll have to use Illustrator so I need some help from you guys along the way.

Illustrator CS6 has some Photoshop effects included by default in its filters. After applying a "Photoshop" effect (in this case, the cutout artistic effect), will the output be vector because it was made in Illustrator? If not, then how can I go ahead and make it vector?

No, they are not vector. They are raster and remain raster.

However, upon output, the raster effects are generated to match the resolution of the output device in conjunction with the Document Raster Effects Settings as well as any scaling which may take place upon output.

Make certain the Document Raster Effects Setting (in the Effects menu) is set appropriately for your needs and you should be okay.

If you must have it as a vector object, you can expand the object and then use Live Tract/Vector Trace to trace the raster image.

What Scott says is true, but since you're talking about the way it's stored within illustrator, there's one thing worth adding.

That means that you can scale up the vector shape as much as you like without the pixelation problems you would get scaling up a fully rasterised shape. Here's a simple example: 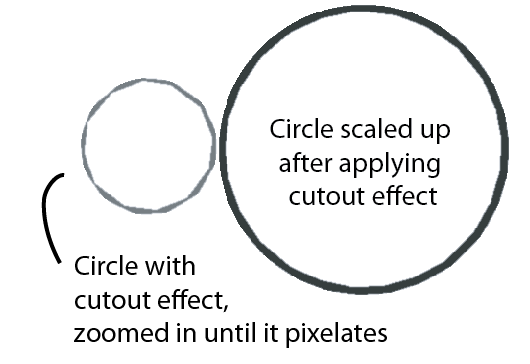 Both circles pixelate at this zoom level - because as Scott says, it's a raster effect. But both circles pixelate exactly as much as each other, despite the fact one of them has been scaled up. Illustrator takes the settings for the photoshop effect and re-applies them to the newly sized circle. This also causes the effects to look different.

So you might not need to use Live Trace to get what you want - you can 'infinitely expand' the shape, and each time you do, it'll re-apply the effect at the resolution you choose in Document Raster Effects Setting. You can take a tiny image, apply photoshop effects, then scale it up to fill the page and it'll re-apply the effect and will have the exact same level of pixelation as the smaller image.

That said, it might be worth live tracing at some point anyway, to 'fix' the effect. When you scale the image and it re-applies the effect, it might not work in the same way as you intended. Here's another example using the 'Sketch > Reticulation' effect (again zoomed right in so you can see the pixels): 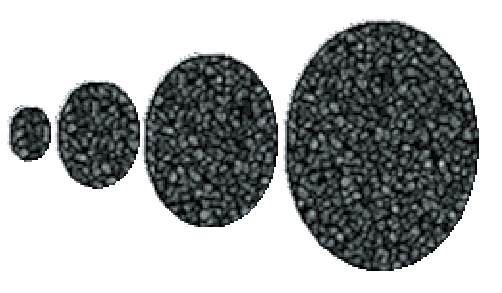 Each time the effect applies as the circle is scaled up, it re-interprets the effect, filling the circle with a greater number of gravelly bits in a new pattern that works at the same resolution.

So, you can 'infinitely' scale up a vector shape with a photoshop effect applied without worrying about resolution issues or data loss as you would in Photoshop working with raster data. But, you need to keep an eye on how the effect is applying itself each time, to make sure it's not re-interpreting it in a way you don't want. If it does, you've got two options. You can tweak the settings to better fit the new size, or, you can go back and 'fix' the effect into pure vector data using live trace - depending on what you want in each case.

Not the answer you're looking for? Browse other questions tagged adobe-illustrator vector photoshop-effects raster or ask your own question.

4
Saving vector art using Illustrator with the intent to sell artwork to people who work with various vector software and versions of Illustrator?
3
Workflow for print publishing children's book?
10
How to create an artistically posterized monotone portrait?
0
how to make inner shadows on objects?
5
Creating nested grids in Illustrator
0
Erase parts of a raster layer in Illustrator
0
Illustrator exporting strange artifacts with Visio objects
1
How to achieve vector look on flowers from a photo?
0
Using Illustrator vector layers in Photoshop for Gif