What are the pros and cons of using Lab color?

I often see suggestions of converting an image to the Lab color model when editing images in, for example, Photoshop. What are the pros and cons of doing this?

Are there specific functions or tasks that Lab color will help me with, and are there any specific cases when I shouldn't use Lab color? I understand that the Lab color model has a wider gamut than both CMYK and RGB. Does that cause problems with using out-of-gamut colors?

The world is full of magic things, patiently waiting for our senses to grow sharper. (Yeats)

Lab, which I often read as Lab but is properly said L-a-b, is amazing. It makes the world a more colorful place. If you've ever taken magic mushrooms, its kinda like that. With Magic Mushrooms subtle color differences can become far more apparent because they shut down the part of our brain that restricts those things based on our human experience. Basically, we've evolved to largely see what we need to see thanks to our brains. Magic Mushrooms turn off that part of the brain. (For ref: Magic Mushrooms Expand the Mind By Dampening Brain Activity)

Similarly, we're accustomed to working on RGB displays and viewing print in CMYK. Often on monitors that don't even begin to cover the spectrum of what our eyes can perceive. Lab is a much closer approximation to those colors. Using Lab is turning off the restrictions faced by current reproductive processes and allowing us to really bring out subtle differences based more on how humans perceive the world.

Goethe, Pink Floyd, and The Dark Side of the Cones

To really understand Lab we should at least kinda understand how humans perceive the world. Lab, unlike CMYK or RGB, is an Opponent Process.

Stare at this for 10–20 seconds then look away, preferably at something white. You'll experience an After Image. 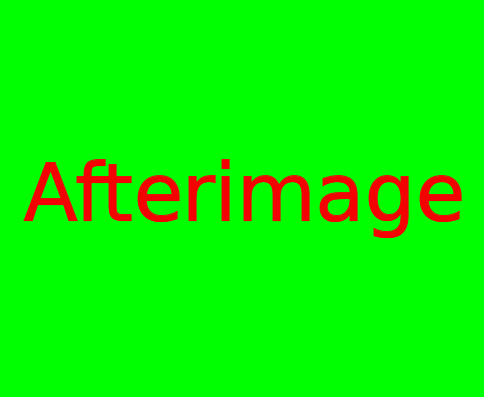 In this case the After Image will be a Magenta rectangle with the text in Cyan. Without getting too much into Rods and Cones they each view different parts of the spectrum, and they each get tired. After Images occur because your Rods and Cones get fatigued so then compensate.

In Lab you have two color channels. Blue towards Yellow (Opponents) and Green towards Red (Opponents), which is a much closer approximation of how us humans perceive things. Rods, Cones and all that jazz.

Then Black and White are also opposed in the way we perceive the world. This is where contrast and depth perception really exist. Colors are perceived only to aid this and exist only in our minds. Now in RGB how do we make black? We empty out the Red Light, Green Light, and Blue Light. In CMYK how do we make black? We flood enough color into a spot until it becomes a dark messy thing resembling black (What kind of black should I use when designing for CMYK print?). In Lab we solve this by giving Black and White its own channel: the Lightness channel. You want black, Lightness is 0 and the A,B should be zero because Black has no color (in fact Black absorbs color).

Tripping on Lab (aka The Pros)

So to recap the pros thus far: Closer resemblance to human perception, wider gamut, treats Black and White as their own opponent channel (more commonly people will just say "Separates contrast from color"). But in practice what does this mean?

To start with, we can make much greater shifts because color shifts don't affect contrast and contrast shifts in turn don't affect color. Here I've crushed the contrast of both by reducing the black point to 50% (RGB 128 / LAB 50). 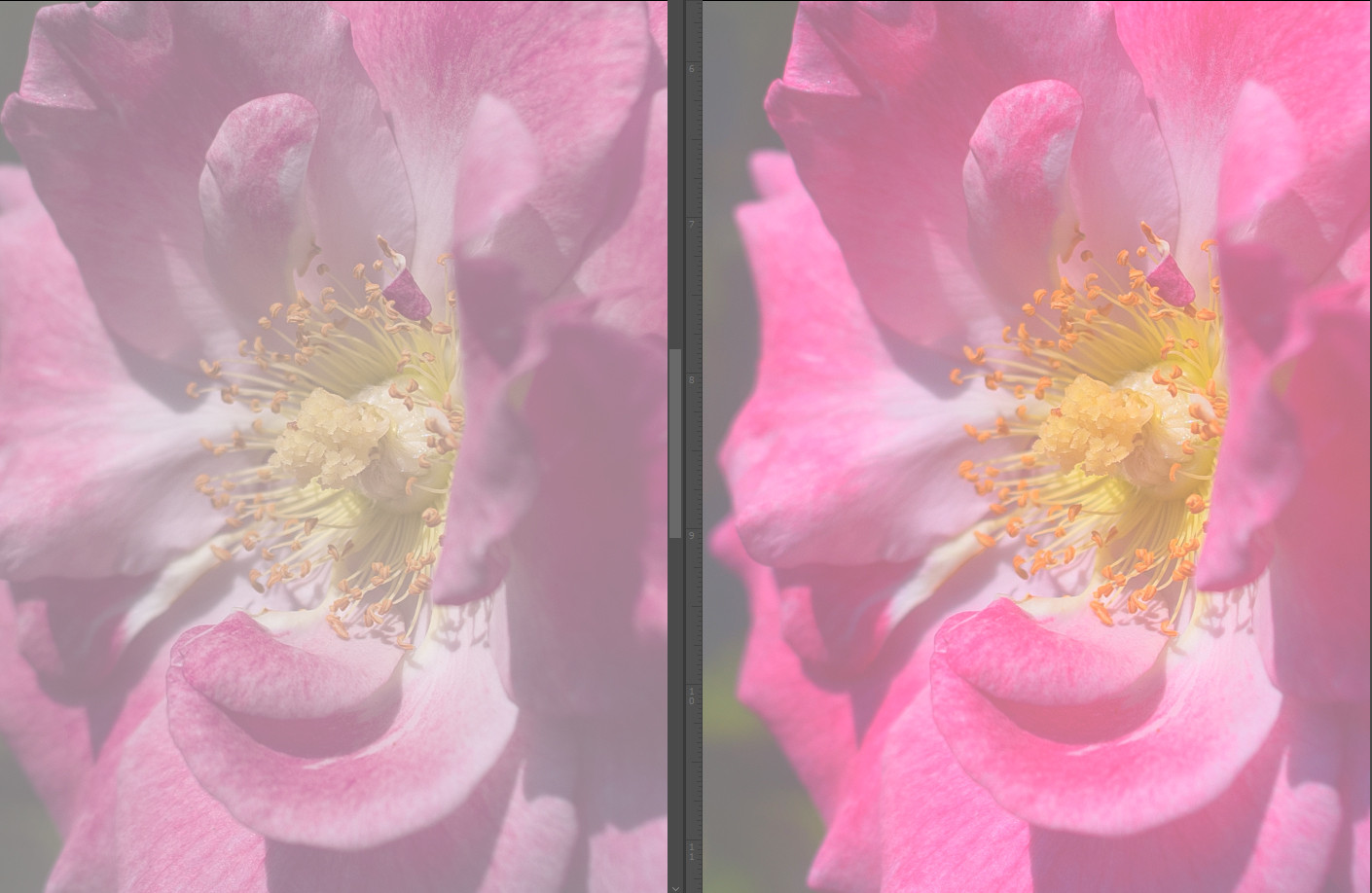 In RGB, because the black point is actually a composite of RGB, adjusting it flattens all of our colors quite a bit. You're probably thinking, but can't I just switch the Curve to Luminosity? Well, yes and that will certainly help but still not as good as Lab is without such extra steps: 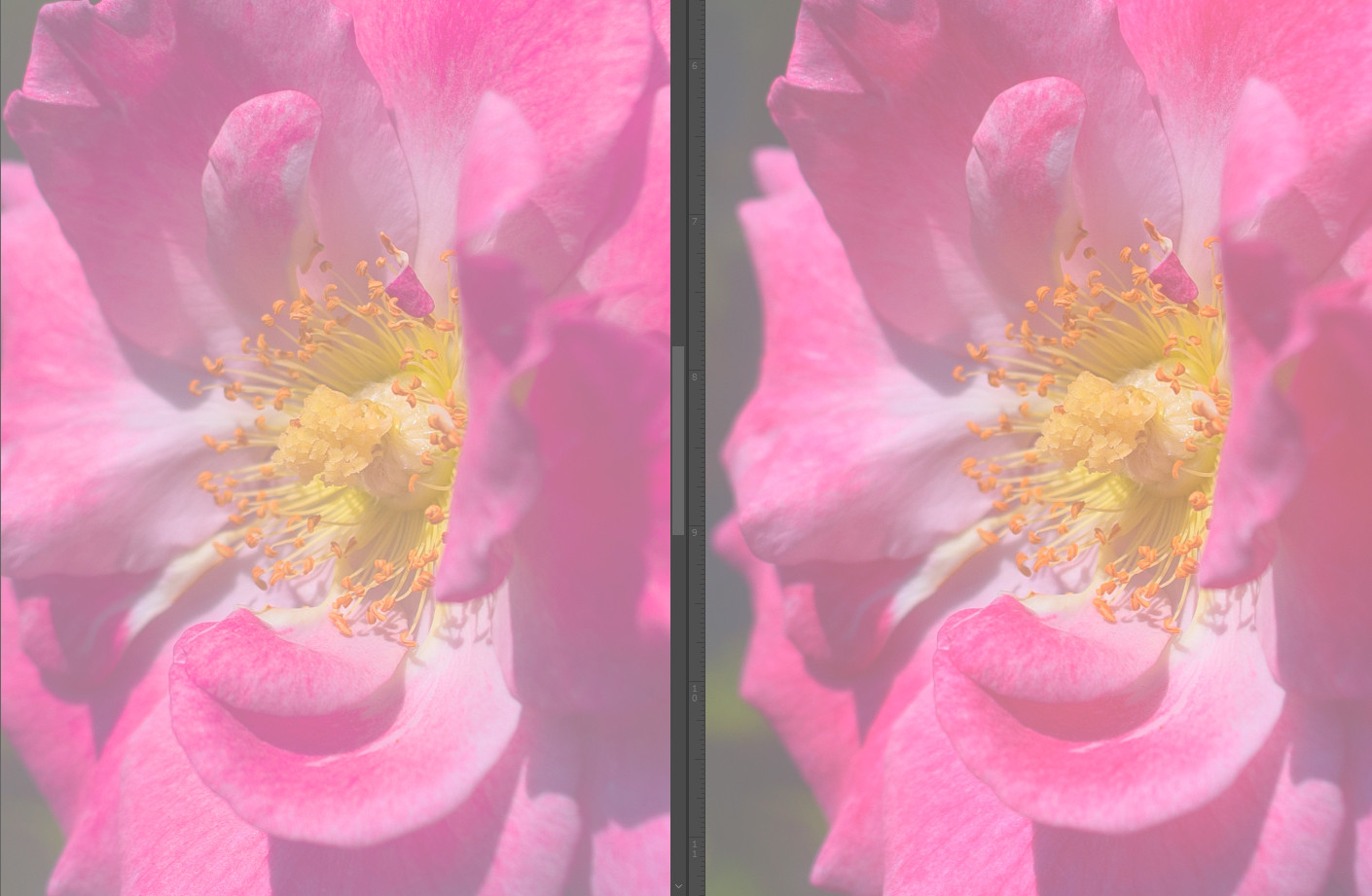 Alright, next I got rid of that and in this one I inverted the color channels from each of our samples. I did not invert the L channel because as you'll see I can get to similar (actually better) colors without touching the L channel. Where in RGB I had to invert all 3. As a result we can see how the RGB no longer looks "real". 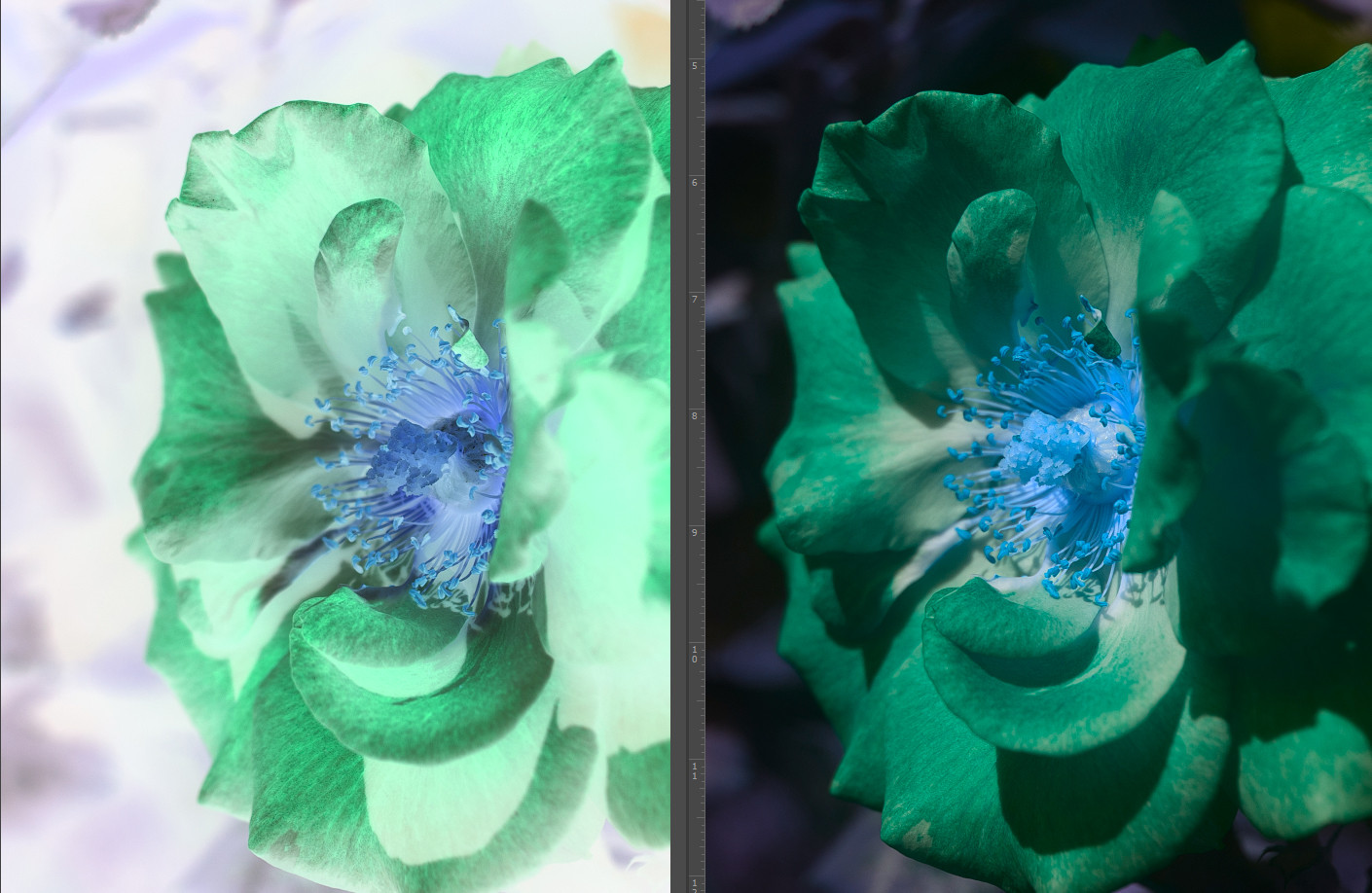 Moving right along let's say we want to do some sharpening. Sharpening is predominately a function of contrast. I'll use the same Unsharp Mask on the RGB and on the Lightness. I'm using the settings Amount: 127, Radius 7.9, Threshold 1. While the contrast is pretty equal in both, you can see how the colors on the RGB side shifted slightly. While this may not seem like much and you might even like it, its not what we wanted. We were trying to sharpen the picture not change the colors. Lab has better control over this. 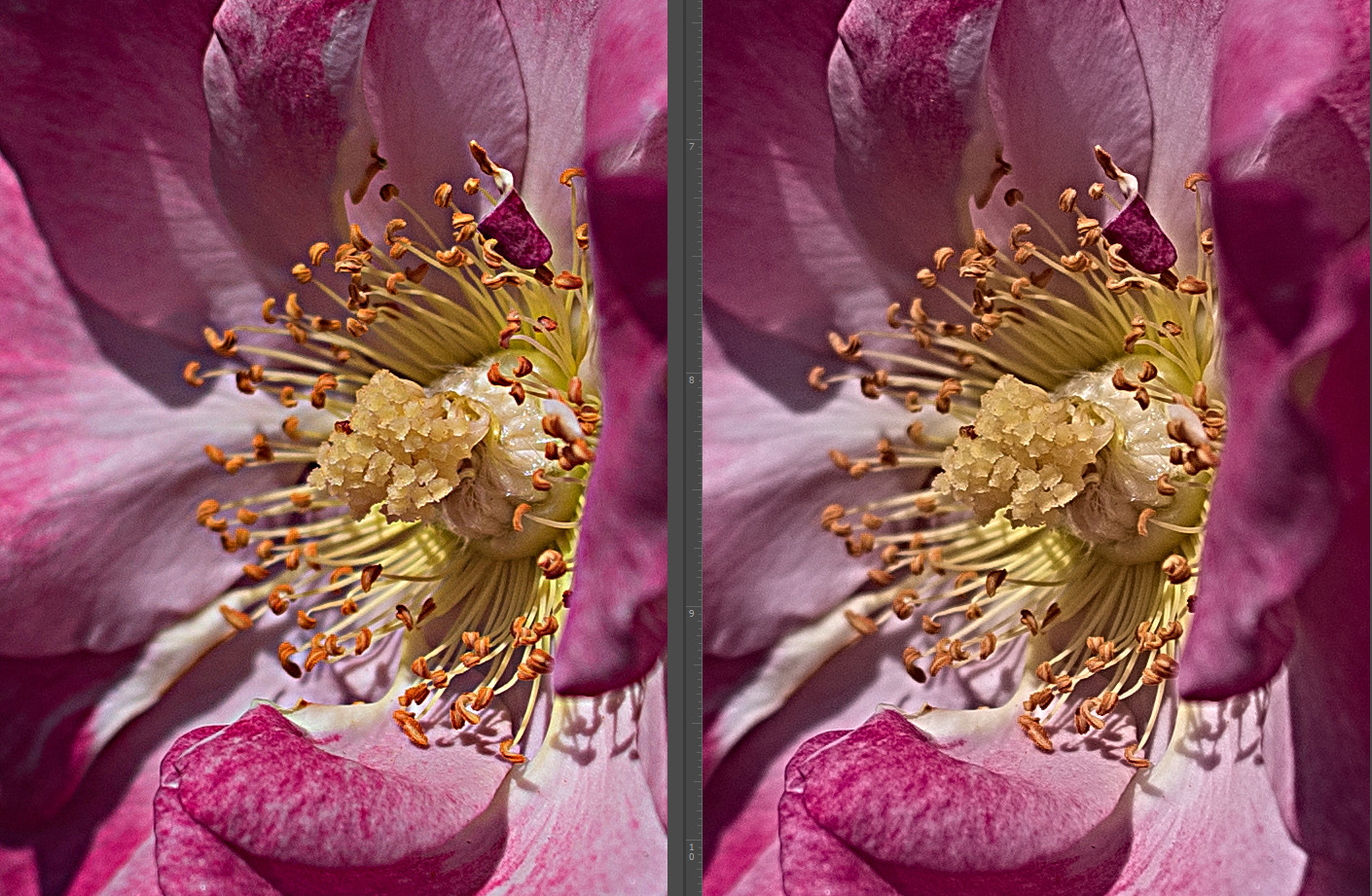 Now one of the most basic moves in Lab is giving a color boost. You do this by bringing in the A and B channels an equal amount. Some think, why do this when I can just bump the saturation in RGB? But compare the differences. Notice in the kind of top middle on the RGB side how the petal has some saturation issues already, and I did a very gentle push. The Lab side had no problems at all. 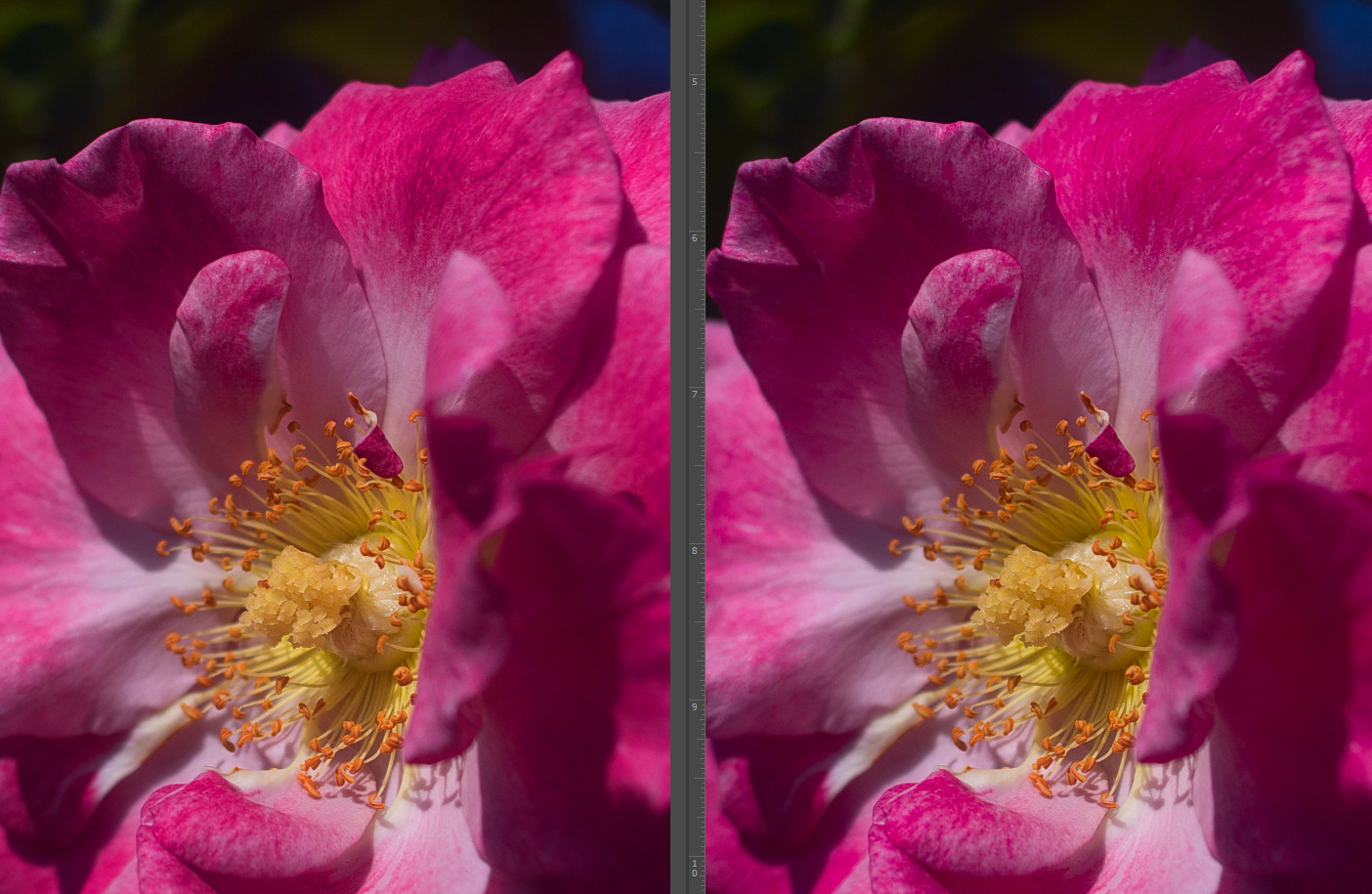 Reality leaves a lot to the imagination. (Lennon)

As said, Lab provides us with a fuller gamut. In fact when converting from one color space to another it generally uses Lab as the go-between because of how much larger it is. But how does this benefit us?

Depending on your own display you can hopefully tell these 3 magentas are not quite the same. CMYK's strongest Magenta is 0, 100, 0, 0. That's what is in the first and second columns, although I listed it in RGB in the second column. Depending on the RGB available this can easily go out of Gamut. Meanwhile in the third one I started with that same 0, 100, 0, 0 and then increased the L.

Let's see the specs on that third one to help clarify, and I'll push it even further:

Both sides are CMYK 0, 100, 0, 0 but clearly different. How!? Because I then pushed the color past that in Lab. Now its more like a Pantone Neon, something we can imagine exists but is outside both RGB and CMYK. Is this very useful? Maybe not, but tools are just that — tools. There when you need them.

When is this helpful though? Enter Laserbeams.

Okay, not really laserbeams, sorry, but really bright areas as in blown out areas. RGB after a point would just go white and fixing it is quite hard. Little things, sure you can clone stamp and find solutions for. But larger areas can get tricky. Enter Lab. The only difference between the left and right is the right is in Lab. No other changes made. Lab can push colors in ultra bright areas where RGB and CMYK can't reach with ease. 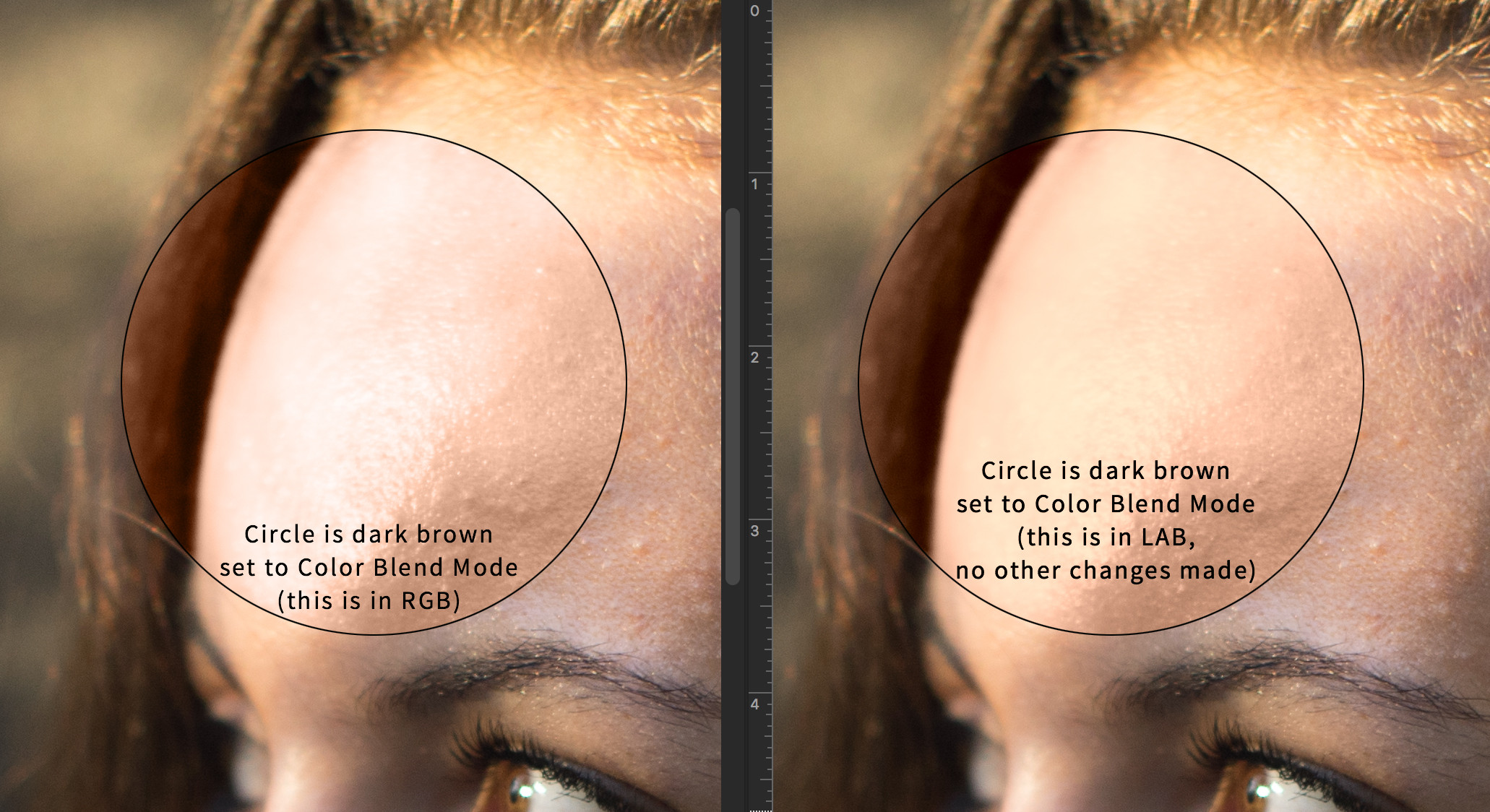 Coming Down (aka The Cons)

Lab is a tool. I don't view any tool really as having cons, only pros. Lab just happens to have more pros than CMYK or RGB. If I had to try and find a con it would be that you have to take into account final output. But is that really a con? If I work on a photo in RGB I also have to take into account final output to print. If I work in CMYK I might have to print in Grayscale. These aren't really cons though. Always design and work to the best you're wanting and then decide how low of a quality you need to be prepared to deliver it in. Never design to the lowest common denominator and capabilities.

Really the only downside is that your standards will increase. Most don't want to come down from a great mushroom trip, you don't want to go from a wide gamut display to a low gamut display, or for those that have never experienced that perhaps going from a 5k Display back to a 1080 display, and you won't want to look at photos people deem as good because they have no idea how much better they could be. That's the biggest con there is.

“It’s no use going back to yesterday, because I was a different person then. (Alice in Wonderland)

Down the Rabbit Hole

If you don't already know about Channels then I'd encourage you to do two things:

Assuming you've got that covered it's time to take the Blue Pill:

If you had read the answer, you'd know I'm not writing this for the lowest common denominator.

Not the answer you're looking for? Browse other questions tagged color-theory color-spaces image-editing technique perception or ask your own question.

79
What kind of black should I use when designing for CMYK print?
8
How do you find an inverse colour?
10
Alpha Transparency Remove Background Photoshop
7
Lab Color Space in photoshop
3
How can you remove a stucco texture from an image?

14
How to calculate other colors with the same perceived lightness as a given gray value?
8
If these colors all have the same lightness, then why does my brain tell me some are lighter than others?
13
How do you avoid bands of prominent color in gradients?
3
Why are Pantone Color Bridge (UP) so different to Pantone Solid (U)?
4
How yellow color is formed using RGB color model?
0
How are color palettes used in Web Design?
3
Question on color theory and automatic color scheme generation
0
Is it possible and reasonable to compensate the media white point of a target color profile?
0
Basic practical difference between Lab and Lch color models