How to identify fantasy fonts

I can clearly identify wacky fonts like this one:

to be of the "fantasy" type, but some fonts look almost like regular serif or sans serif fonts only with some strange things going on. As an example take this other one:

It's advertised as serif, and it does have some serif characteristics as far as I can tell, but it also has some strange characters that seem out of place, like the lower case "a" or "f". It just doesn't strike me as being a proper serif font, but I'm no expert in type.

How can I be sure a font is fantasy or not?

Like "fantasy," "wacky" is not in the Dictionary of Spiffy Type Terminology. :)

I get from your question, and the exchange with e100, that you're asking about decorative type rather than "typefaces that would be good when designing a fantasy MMORPG."

A decorative face is, for the most part, one that doesn't fit in any of the categories used to describe text or ordinary display faces, such as "transitional", "modern", "slab serif", etc. Decorative faces are okay for headline or display applications, never for longer passages of text.

Your first example goes beyond "decorative" and is what's often called a "novelty" typeface. "Novelty" songs are basically musical jokes ("A Boy Named Sue" and the old Sonny and Cher "Rockefeller song are good examples) that you get the first time and don't find so amusing or interesting the second or later times. Novelty fonts are the same way. Use those dragons in a headline, everybody gets the dragon joke, then it's stale.

Blue Island is a decorative font. Toybox Blocks is a novelty font.

Serifs are a specific feature of a typeface; ModernAntiqua has serifs so it would definitely be considered a serif font. But you could also give it other classifications, such as "post-modern", perhaps.

"Fantasy" isn't really a very specific or commonly used classification, although it is defined as a generic font-family in CSS:

Fantasy fonts, as used in CSS, are primarily decorative while still containing representations of characters (as opposed to Pi or Picture fonts, which do not represent characters). Examples include:

This would only be used as a final fallback if none of the fonts specified are available.

I think "decorative" is more likely to be used.

e100e100
9,51255 gold badges4040 silver badges7171 bronze badges
add a comment  |
-2
Want to improve this post? Provide detailed answers to this question, including citations and an explanation of why your answer is correct. Answers without enough detail may be edited or deleted.

I use Identifont.com. You can even enter in a specific set of characters. 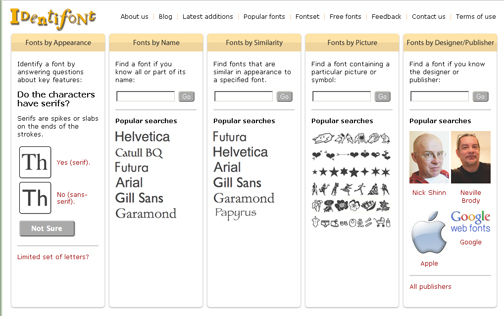 Not the answer you're looking for? Browse other questions tagged fonts style-identification or ask your own question.

7
Is there a standard for categorizing typefaces?

6
Do all monospace sans-serif fonts look the same?
3
Designing fonts
9
Open type sans serif fonts with true small caps
3
What sans-serif fonts pair well with Bookman Old Style?
7
How do I find sans/serif pairs of fonts?
3
Is there a very specific font identification tool online?
0
Please help identify this font - Have tried all font identifier programs
0
How to find: Boldest font readable at a small size?