How to snap end points of straight lines to form connected triangles?

I'm trying to create connected triangles in inkscape. Similar to how the header of https://blender.stackexchange.com/ looks like:

except that I only want triangles and no fill, just strokes.

I picked the Draw Bezier curves and straight lines (shift + F6) tool and set the mode to Create a sequence of straight line segments. Despite several snap option being enabled, nothing snapped. The tool neither snapped to points of the currently drawn path (except the first point) nor did it snap to any previously drawn path. The result looks wrong because the lines do not meet at exactly the same positions. 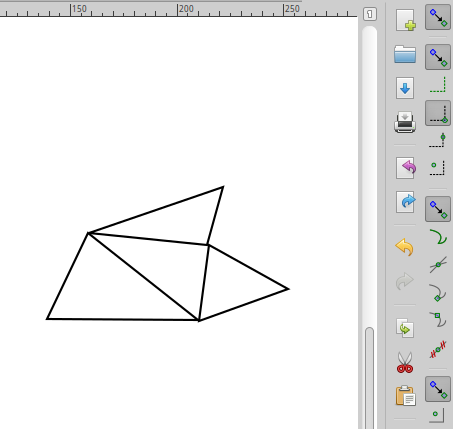 How can I draw straight lines that will snap to other lines at their end points?

Ideally, I would be able to draw a single line, between two points. (not many as the bezier tool does) I would specify starting and end point of that line by clicking and both would snap to nearby existing points I previously placed if applicable.

You must enable one of the several snap to nodes options, which you have deselected according to your screenshot.

Not the answer you're looking for? Browse other questions tagged inkscape stroke snapping or ask your own question.

1
Snapping shape anchor points to a curved path in Illustrator
10
How to put arrows along a path in Inkscape?
4
GIMP: Stroke Path along single points
1
Illustrator CC Snap to Grid with Pen Tool Not Working Correctly
1
How do I stop Illustrator from changing my anchor coordinates?
5
How to create circular “returning” arrows in Inkscape
7
Creating snap node from intersections in Inkscape
12
Draw simple lines in Inkscape
1
How to use path operations to make a ribbon?
1
“Dashes” greyed out for brush strokes (Inkscape 1.0)