How to create the illusion of raised ink or paint

I have a two-dimensional, multicoloured image such as a corporate logo, and I wish to modify it to create the illusion that it is an image rendered in paint or raised ink. That is, I want the medium to appear to be three-dimensional.

I have played around with various techniques but have so far failed to produce a result of great quality. I achieved some semblance of the effect by applying the emboss effect, altering the contrast and brightness, changing white to alpha, then reapplying the original image underneath. However, the emboss effect extends out further than the edge of the image, and my technique also applies black shadowing rather than darkening and brightening of the original colours. I essentially need something similar to the application of a normal map.

Has anyone had any success with a similar project?

I achieved a good result with the method described hereafter.

The whole process is a little cumbersome, but with care one can achieve a good result.

Are you using illustrator? I have tips for creating depth in illustrator. Basically to make something look raised you make it dark near the edges and light in the high areas. Depending on your shape there's different techniques. For a rectangle you can fill it with a gradient that gets darker near the edges. For any shape, you can fill with a bright color and apply inner glow/edges with a darker version of the same color. Adjust blur until it looks like a shadow. The best shaped gradient can be made with a blend. Take your shape, make it a dark color. Copy the shape, make it a lighter color, reduce in size (a little to make it look raised but flat, a lot to make it look pointy) Place the little one on the big one, select both and then Object/Blend/Make (make sure blend options is set to smooth color, both shapes are expanded with no stroke). With circles this works instantly. With complex shapes you need to isolate the blend and adjust the smaller or outer shapes until the roundness 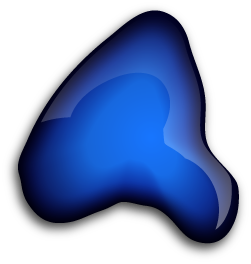 looks right. For a glossy highlight take a copy of original big shape, fill with a black white gradient, lower opacity, apply Transparency/Screen and place over the blend. Adjust all parameters of the highlight shape (gradient amount and direction, opacity, size, shape) until it looks right. Apply a subtle drop shadow to the blend. I made this blob in a couple of minutes with the above described blend technique. I exaggerated the darks and left the highlight obvious so you can see.

What about a simple: Filters → Light and Shadow → Xach-Effect?