How do I create an emoji font?

I've got some svg/ai files that I'd like to turn into an emoji font. Is there a way to do this? Every time I try to import into FontLab, it only imports as a black and white glyph.

With latest update to Photoshop CC, it gained ability of emoji and SVG font support.

Emoji fonts are an example of OpenType SVG fonts. Using Emoji fonts, you can include various colorful and graphical characters, such as smileys, flags, street signs, animals, people, food, and landmarks in your documents. OpenType SVG emoji fonts, such as the EmojiOne font, let you create certain composite glyphs from one or more other glyphs. For example, you can create the flags of countries or change the skin color of certain glyphs depicting people and body parts such as hands and nose. 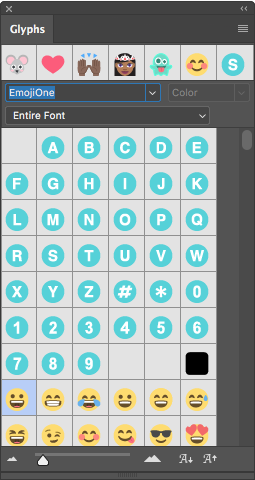 Create flags of countries: The "letters” (A, B, C, D, and so on) in EmojiOne do not correspond to the corresponding keys on the keyboard. When you combine these characters in the Glyphs Panel to make up a country’s ISO code, the two characters form the flag of that country. For example, US gives the American flag, GB gives the British flag, AR gives the Argentine flag, and IN gives the Indian flag.

Not the answer you're looking for? Browse other questions tagged adobe-illustrator fonts svg or ask your own question.

4
how do I import a vector path from Inkscape into Gimp?
5
How do I use an SVG “icon font” within Illustrator?
3
Cropping SVG files
0
Importing photos from Illustrator into After Effects
0
How to create a custom font with multi-part glyphs?
1
Is it possible to import my own SVG into Canva
0
How to globally set guides in Fontlab
1
How to get font glyphs out of OTF/TTF font and into Illustrator
5
How can I improve at drawing calligraphic font glyphs