Raleway font not working in Photoshop

I want to edit the text and font of this .psd file, which is part of a tutorial here. I installed the Raleway fonts, which are also available on that website. Then, I opened the .psd file with Photoshop, but it gives the following message (in Spanish, I'm sorry):

Some text layers contain fonts that are not available. You will have to substitute them before they can be used for vector-something...

When I select Edit -> Find and replace... it says something like:

Text layer "Superman (Font:Raleway)" is hidden and cannot be searched...

This can also be seen in the layers' menu: 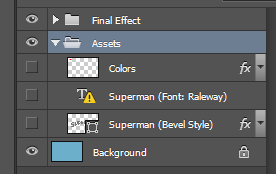 However, I can create text boxes with Raleway fonts, including the ExtraBold, which is supposed to be the one used here:

Finally, if I attempt to save as .pdf, I get something like:

_ The following fonts cannot be found in the text layer "Superman (Font:Raleway)":

That layer cannot be included...

Yet, that font does not exist! What is the problem?

PS: first time using PS. Hopefully this is not a supernoob issue.

I think you downloaded the fonts from a different place than whoever supplied the PSD. There could be some difference in the font file that makes your computer think it isn't the same font. Allow Photoshop to replace it with something similar then highlight the font you want and change it to the Raleway you have. If that doesn't work you could just delete that layer with the missing font and remake whatever was in it.

0
Why is photoshop not taking in my fonts?
6
How to find font name in Fireworks when font not installed
0
"Some text layers contain fonts that are missing" when opening PSD files in Photoshop
23
How can I open a PDF in illustrator and convert text with a missing font into outlines
0
Linking font properties on different text layers in photoshop
5
Font, font weight and size not saving in Photoshop PDF format
0
How to use this psd font?
4
Does it affect print quality if a font in a .psd file is "missing" when received from a designer but you are NOT editing the text layer?