How to draw in three-dimensional coordinate system in Inkscape? 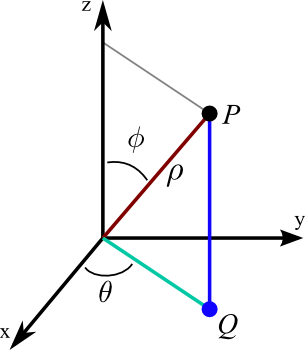 Right now, I am make three arrows and attach them manually to each other. I am wondering whether there is a more standard way of doing that in Inkscape, i.e., creating a frame in Inkscape with all three axis connected at the centre to form one entity.

Here is what I would do. This may already be what you are doing but to my knowledge there is no quicker way to do this:

It's not clear from your question whether you are just trying to recreate the image in your question, draw a 3D grid, or draw something with a 3D grid for reference. Wrzlprmft's answer already covers drawing something like your image, so I'll cover the other two.

Draw on a 3D grid

Inkscape has a grid that you can used to guide your drawing, such as snapping points to it. To show the grid, on the View menu click Page Grid or press Shift + 3.

The default grid is 2D. To use a 3D grid, do the following.

If your goal is to draw an object that looks like a 3D grid, use the render isometric grid extension. This is found in Extensions > Render > Grids > Isometric Grid. Experiment with the various options to get the grid you want (or close enough), and then manually edit it by hand if needed. The rendered grid will be a drawn object that you can manipulate and edit.

This would be an alternative to draw something similar to your posted image. Render a grid with a size of 1 in all directions and change subdivisions to 0. Ungroup it and delete paths you don't need, and then make the remaining stuff look however you want.

10
Drawing a three-quarter circle in Inkscape?
3
Help/docs for using Inkscape for SVG icon font creation
0
Segmenting a ring into three pieces in Inkscape
115
How to draw an arrow in inkscape
14
Inkscape - Feynman Diagrams
0
INKSCAPE - Create a circle in three colors
14
Draw simple lines in Inkscape
5
Understanding SVG coordinate system
10
Can I draw a three-points circle in Inkscape?