Besides RGB, are there any other additive colour mixing models?

Are there any additive colour mixing models that uses primary colours different than red, green, and blue?

My question is, can I use other colours (not red and green and blue) to get secondary and tertiary colours?

Lets say you were designing your own 3 color additive display device (like a computer monitor).

You probably want to pick Reddish, Greenish and Blueish primary lights for your 3 pixel colors, but in theory they could use any colors.

The theory behind additive color mixing are a set of laws known as Grassmans Laws and they do not specify what colors your primaries must be or how many you need.

You can in fact build an additive color rendering device from any number of primary lights of any color.

The catch is that no three primary lights can reproduce every color a human can see only a subset. The range of colors three primaries can produce are called the color gamut of the system.

Redish, Greenish, and Bluish primaries happen to give a very large color gamut. This is easy to see by the area of the triangle adobeRGB primaries form on a chromaticity diagram. 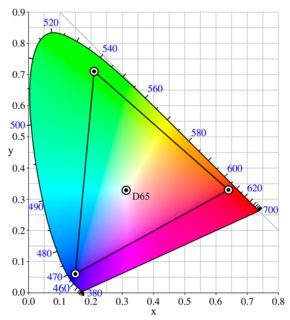 As you can see in this Stanford Gamut Mapping tool, some choices of three primary colors would form a triangle with a very small area which would limit the # of colors that could be displayed. 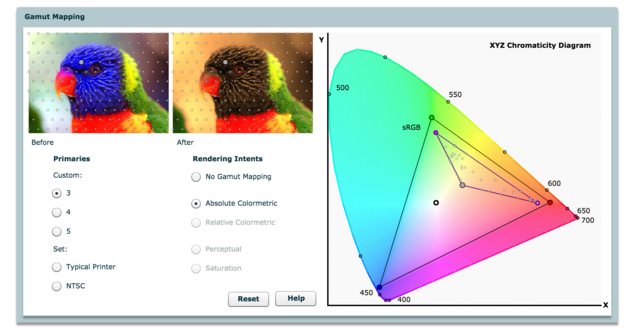 But the answer to your question is that there many 3 primary choices with gamuts that bound any given color.

Hum... What other primary colors?

You could think that Lab uses a diferent coordinate system, if that helps.

If you use some aditive blending modes, like screen you are adding values, if you use multiply you are substracting.

Other systems, like YIQ (simmilar than Jpg's channels) also "adds" values, for example a color component over a luminosity one.

I am not sure if this answers a bit your question.

Which are the primary colors?

We have 6 primary colors. But depending on which color model we talk about, we have 3 of theese as primary colors and the other 3 are secondary ones.

Some color wheels point to diferent colors because limitations on the technology when they were published.

For example, before Magenta was invented as a pigment, there was no magenta, so they used a diferent color, mostly red.

Some historical color models, mainly pigment models, (because painting was invented way erlier than electronic mediums,) Like RYB mention Red, Yellow and Blue like primary colors. The examples on that page are simply old and inacurate.

Modern understanding on print tecnology and color reproduction on electronic devices now have a solid model.

Some pigments may change in the future, for example, a new variation of a cyan to make it for example brighter, but the names are well defined.

This question reminds me another. And I stand on my downvoted answer on this post:

Why is the opposite of yellow on color wheels sometimes purple and sometimes blue?

Some color wheels are simply, in modern terms, wrong.

But I should mention that, in some other models, like Lab uses a diferent coordinate system, for example one axis goes from Red to Green, and other axis from Yellow to Blue. Thoose 4 colors could be considered primary values on Lab Coordinate system.

One aditional concept of Primary color, one that "can not be achived" using another color, is important when manufacturing pigments.

Pigments are imperfect, they depend on if there exist some non harmfull chemical that produces it, on and industrial scale.

So you have a range of primary pigments that are a base to prepare some others. Pantone inks are based on a pallete of primary inks. Some of they can be considered "primary colors". This give the system a wider gamut.

8
Why is the opposite of yellow on color wheels sometimes purple and sometimes blue?

8
In color theory, what are primary and secondary colors?
3
How to get RYB complementary colors in RGB imaging software
12
Is there a good way to establish a Green-Yellow-Red colour scheme?
1
How to select 5 optimally visible and distinguishable colors?
1
What are the shades of green?
1
Is there a way to get correct color mixing without posterization, working with 8 bits only? Or something better than Linear RGB color space mixing?
0
is there any painting medium other than light emitters(like computer) that has cyan?
2
Why is azure used instead of teal as cyan in color mixing?
4
Is there a color system in which Red, Yellow, and Blue are primary colors?