I have a problem I cannot find the answer on the Internet. I want to achieve this figure in (a) in the attached image (of course I made this manually and has a lot of mistakes): Two misaligned circles, and inside them a bunch of circles that have the same distance from the outer circle to the inner circle. My first problem is that I don't know how to align objects between the two lines of the outer and inner circle (and I don't mean manually or measuring with the ruler). Perhaps moving the centers of the big circles (see (b) )to the edge? I suppose I have to create the black elements of (c) and then have a bend somehow to create the blue ones (?). But I am completely lost. 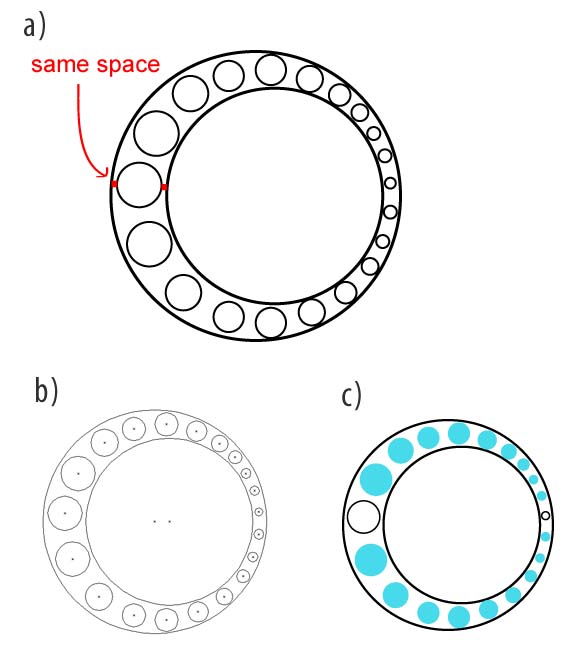 If I can borrow joojaa's image it would look something like this: 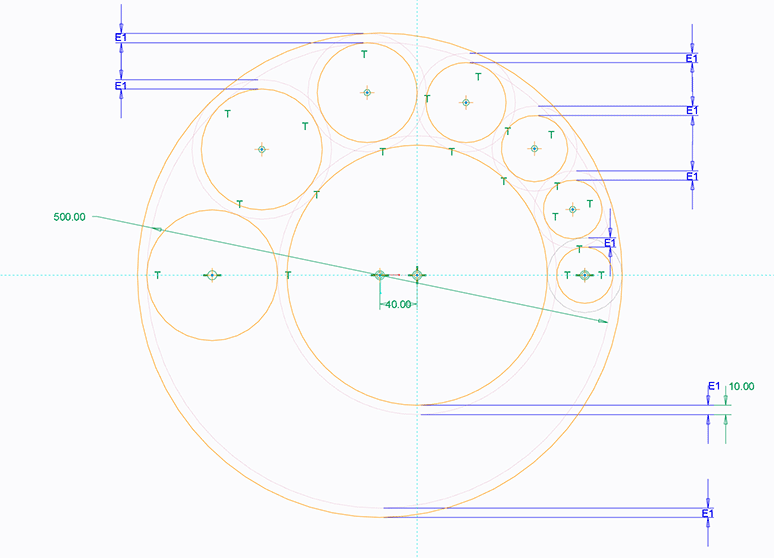 This is achievable by using transform Rotate and Offset path: 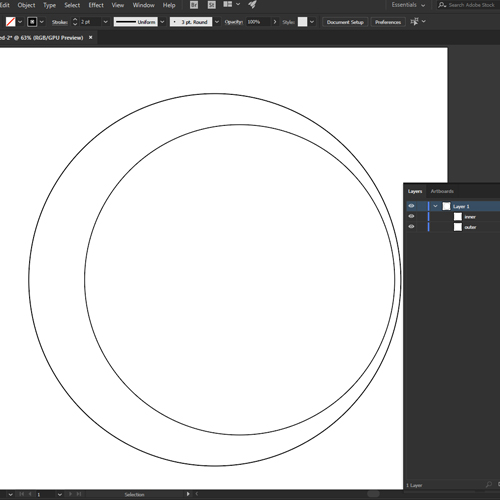 Now we'll use Object > Path > Offset Path and create new circles that are offset an exact distance from the originals. I used -10px for the outer circle and 10 px for the inner. I then moved them to their own layer and made them red so we can see that they're helpers. 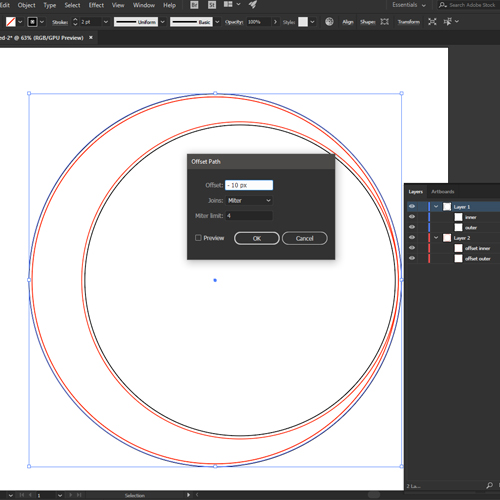 Next we'll create a middle circle. Since the outer has a 1200px diameter and the inner a 1000px diameter, we know this one will have a 1100px diameter. Position the center horizontally equal to the other two, exactly in the middle. Make it red and move it to the helpers layer. 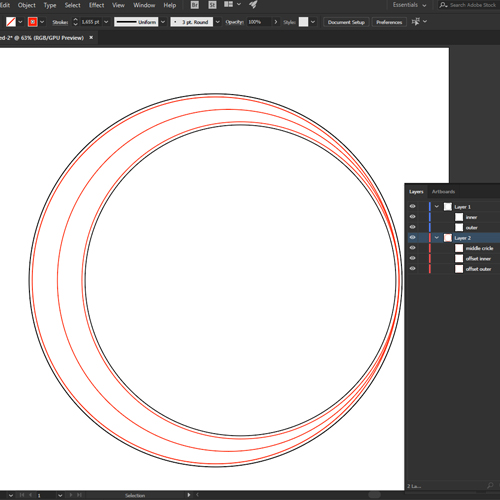 Next we create a vertical line through the center of the middle circle, 1500px long, starting at the border of the artboard. Next we rotate it 30°, making sure to hit Copy. Next we use CTRL + D (or CMD + D) to repeat until we have a full circle. Make them red and move them to the helpers layer. 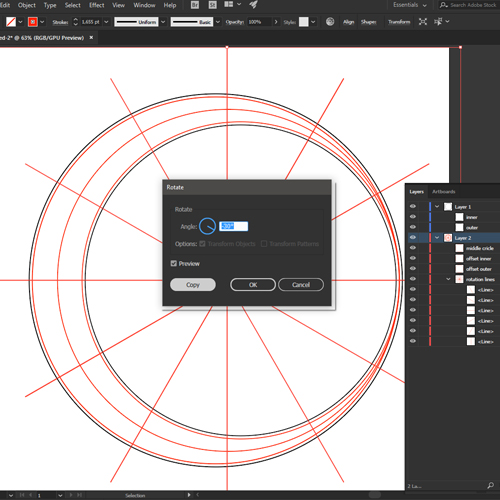 Next we create the final inner circles. Each circle has a center lined up with a division line and touches both inner and outer offset. Be aware that the center does not necessarily line up with the middle circle (we only used this to determine the center point for the division lines). I eyeballed the inner circles diameter, but of course you can get it more accurate using rotation if you want. I made the circles green just to be able to see them better. 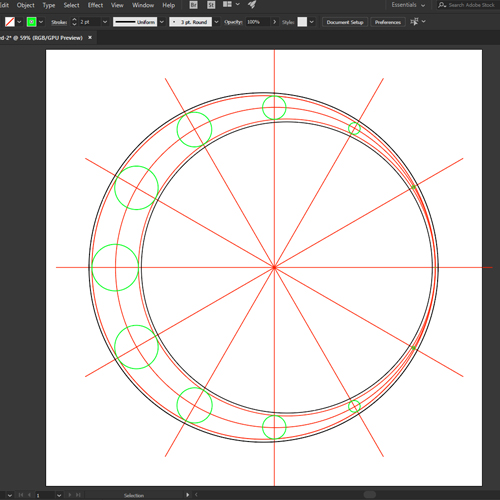 Clean up the file, use the colors you want. Done. 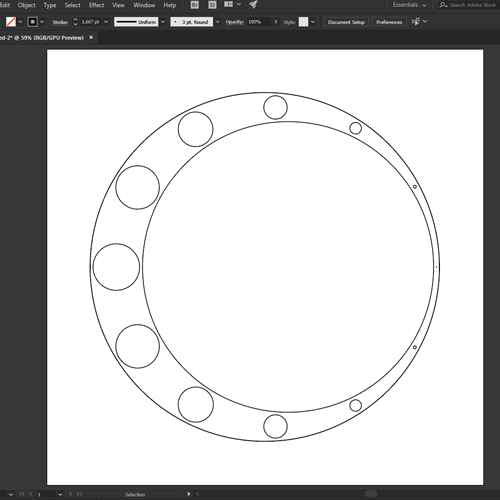 If you add a line through the difference between the two outer circles, you can use this as the hub for each smaller circle around the perimeter... 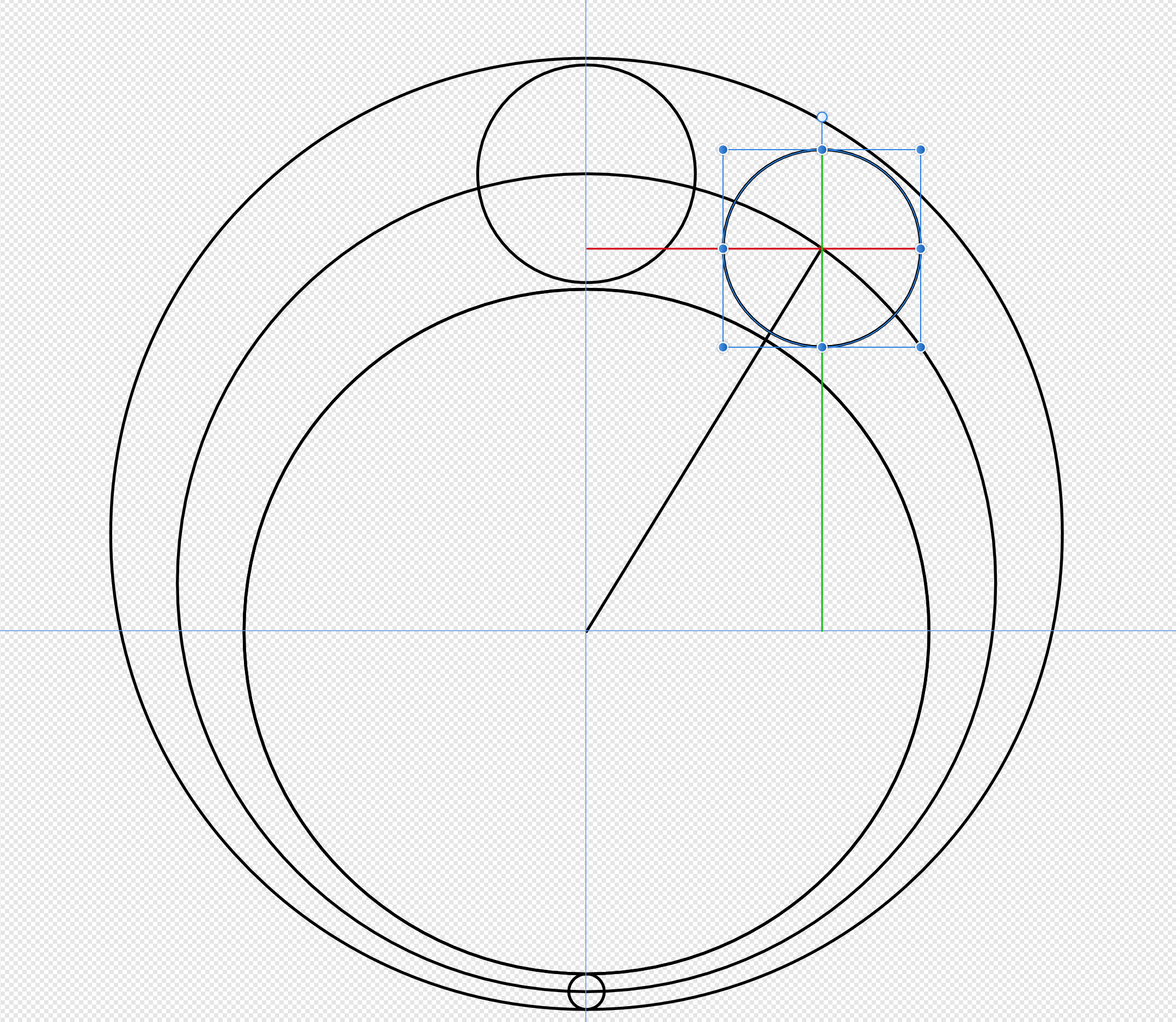 The Colliderscribe-Plugin from Astute would help with this problem perfectly.

6
How To Split Two Intersecting Circles in to Three Separate Shapes
2
Why is Adobe Illustrator rendering my concentric circles like this
3
Lines with arrowheads between centers of circles
0
How to make two white paths and a white fill transparent over a black image in illustrator?
0
AI - how to replace two anchor points with one?
0
How do I subtract the inner path from the outer circle in Adobe Illustrator?
0
Help with the "Draw Inside" Feature
3
Automate re-creating this shape that looks like a paper sphere template
1
Illustrator: snapping circles together in an interlocking way