Illustrator - How can I improve this image?

I'm creating a promotional flyer in Illustrator for a new product but after inserting the product photo it looks like garbage. I took the photo in raw, edited in Lightroom, removed the background in Photoshop, saved it as a PNG and then drag and dropped into Illustrator. The image file is 12x12" at 300 resolution. I shrank it down to 2x2" on flyer. If you zoom on the image you can see a few spots I missed when removing the background which I will clean up while I wait for a response here (I might ask another question for tips on that process).

So the question is, what can I do to make the bottle look better on the black background? To me, the transparency of the glass is where the issue lies but dropping the opacity ruins the label. I'm not sure if I can accomplish better blending in Illustrator or if I'm going to have to go back into Photoshop to prepare it better. Thank you in advance! 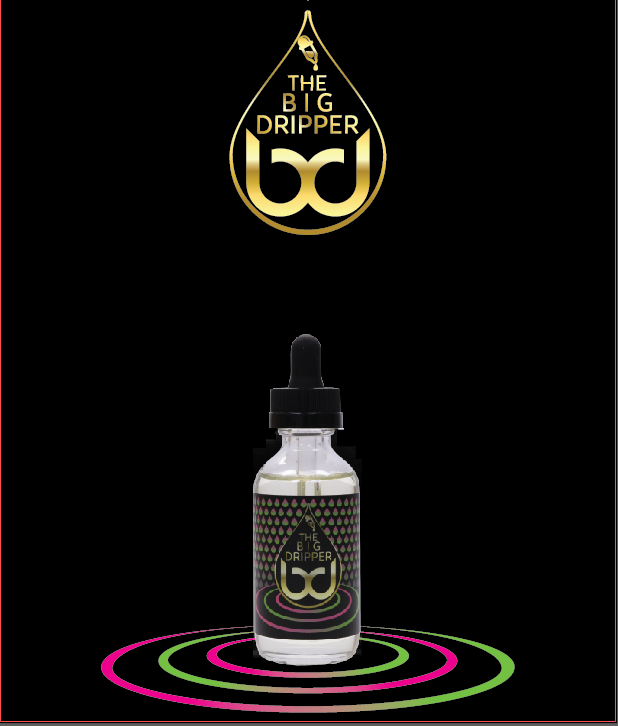 An old case with no serious answering attempts. But the case isn't impossible.I haven't hires images, so forgive me some coarseness. And also the faded colors of my screenshots.

At first I made a spare copy of the bottle body (glass+label). It was easily separated with the direct selection tool. I separated also the label. It got the first actual fix. Its contrast was boosted with the curves to be in the same leaque with the big background bottom rings: 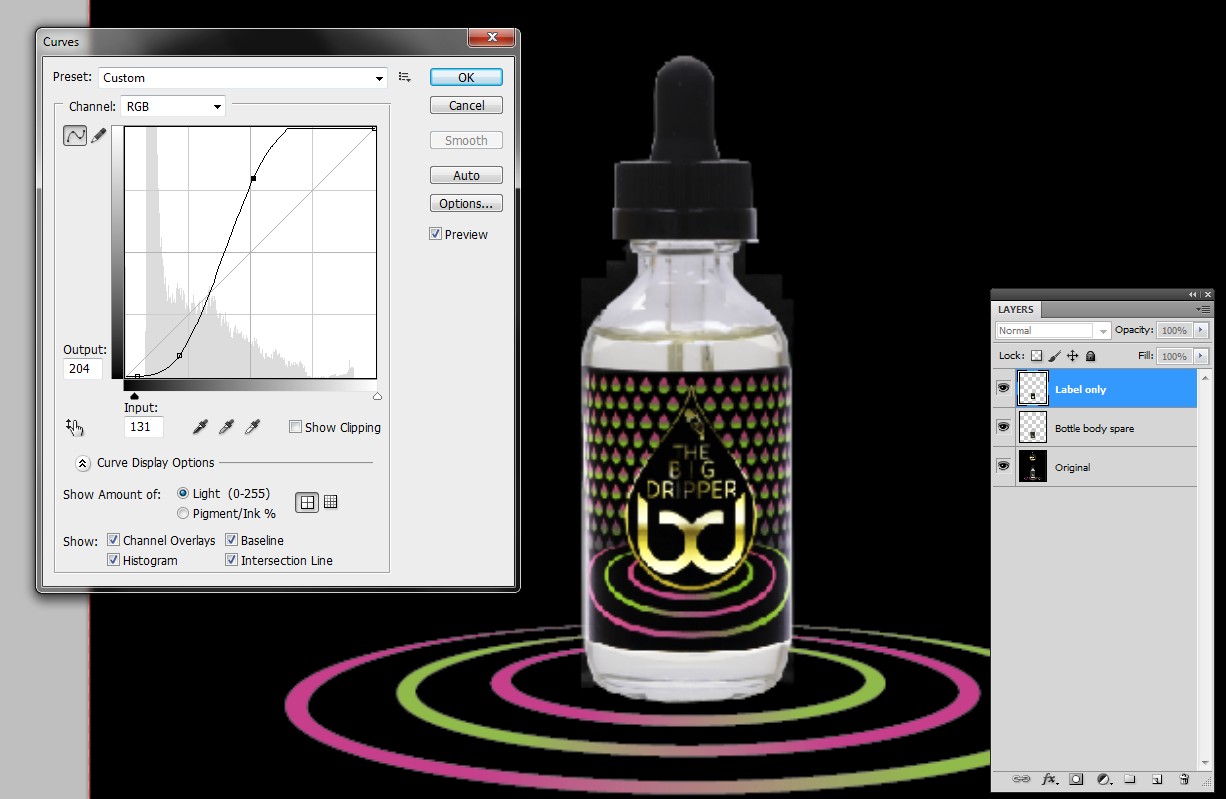 (not asked, but it would be optimal, if the rings in the label and in the background had the same viewing projection: the photo of the bottle should have been taken differently for it. I bet the label would not be reprinted)

Glass parts need 2 operations: Adaptation to the fact that there's black background and restoring the liquid color which will be lost in the adaptation. For those operations I made 2 copies of the bottle body, one as is and one desaturated to grayscale.

The adaptation is simply to turn some midtones black in the grayscale copy. The gloss must be saved. I tweaked the curve until an acceptable one was found. It has only one fault: It introduces some light grey at the top and bottom edges of the label. The primary cause is the not well defined border of the label. There was some dark left out. I'll fix them later: 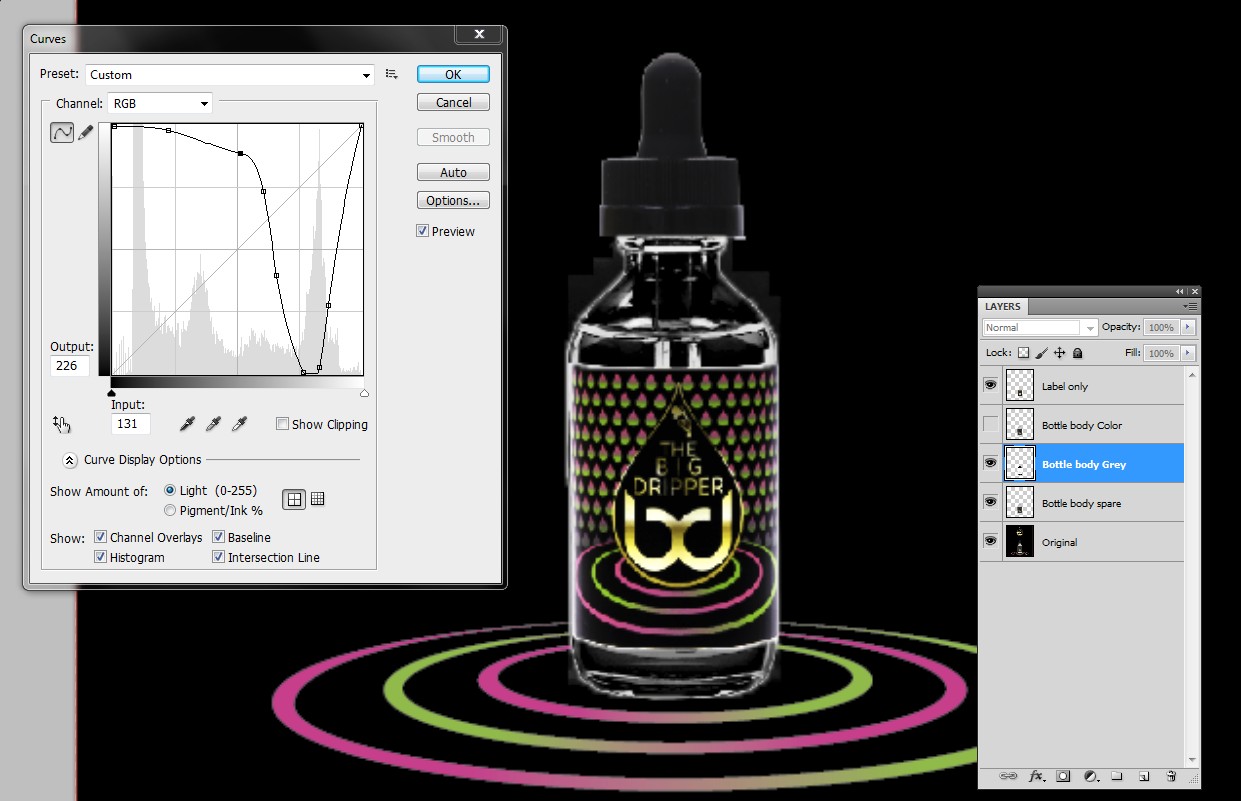 The colored version was placed above the grey version with blending mode color. The remaining grey parts in the blackened body really catch some color. 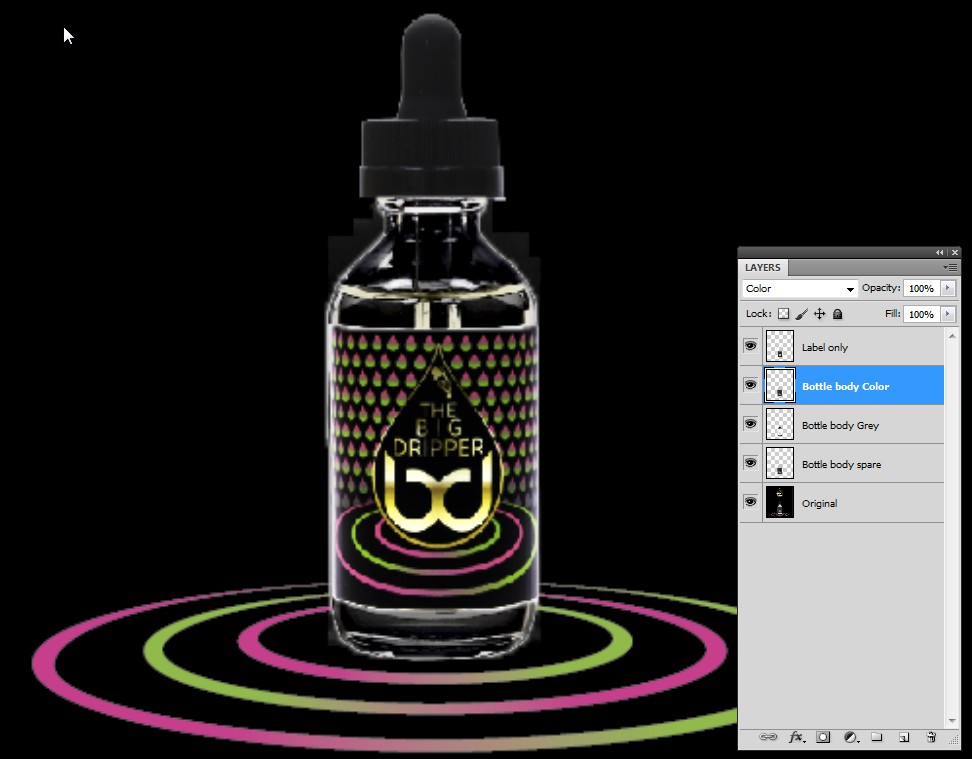 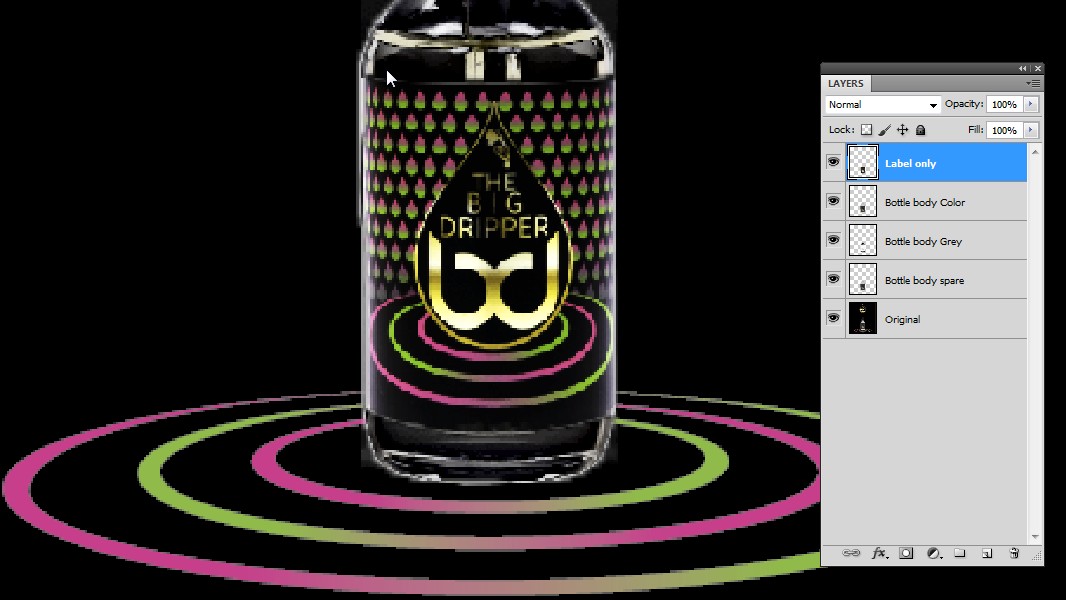 Still 2 fixes: 1)The logo in the label is too faded. A copy was taken from the big version and placed onto the old one as new layer. It was warped very slightly to make it sit better on the curved surface. 2)There were some artefacts in the background at the shoulders of the bottle. They are painted black. 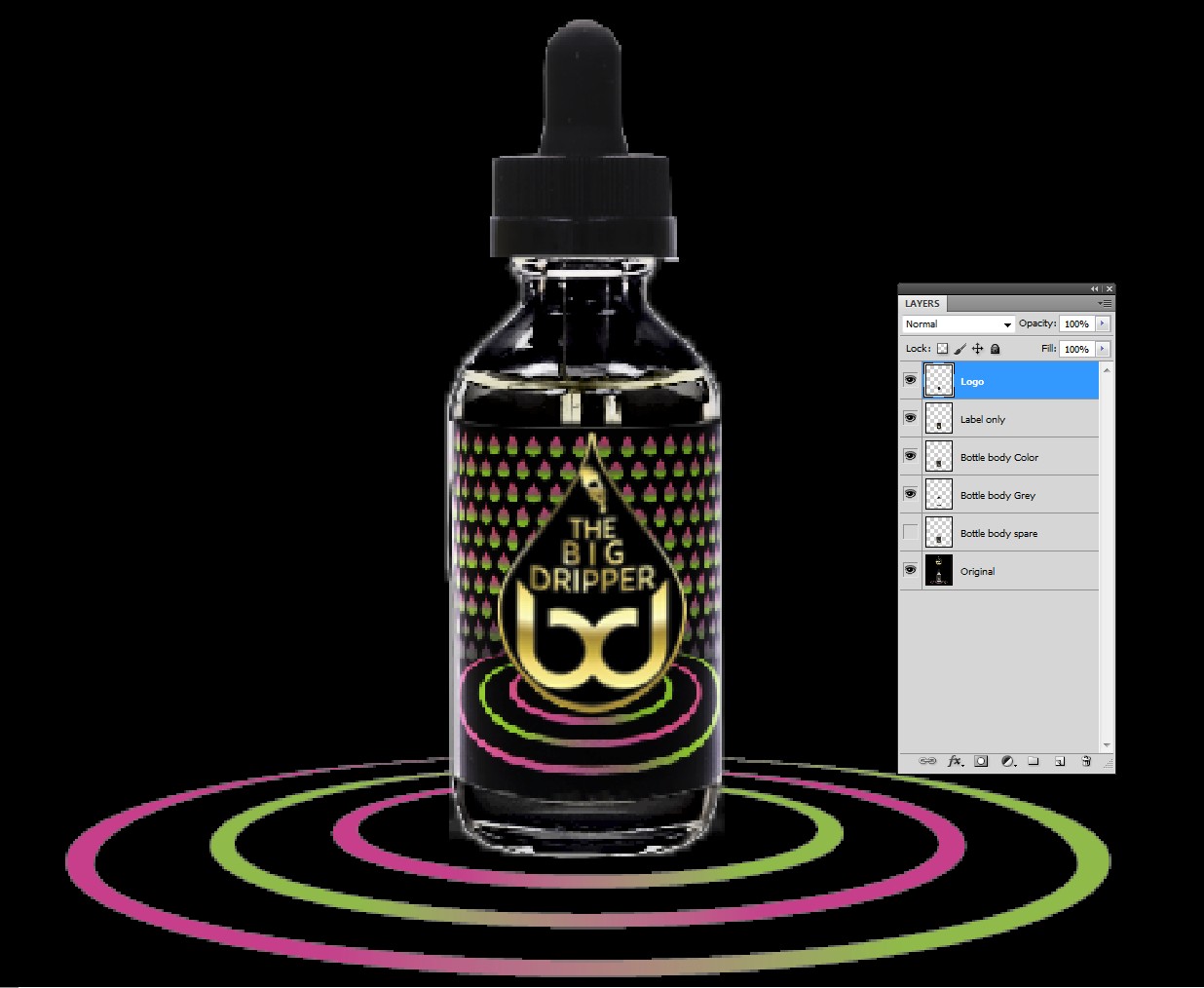 The cap was unfixable in this resolution. It has some 1 px wide white crap at the edges, probably caused by the original background removal. I let it be as is.

There's another method, which is more general than inverting the midtones of the glass. It's tried here. 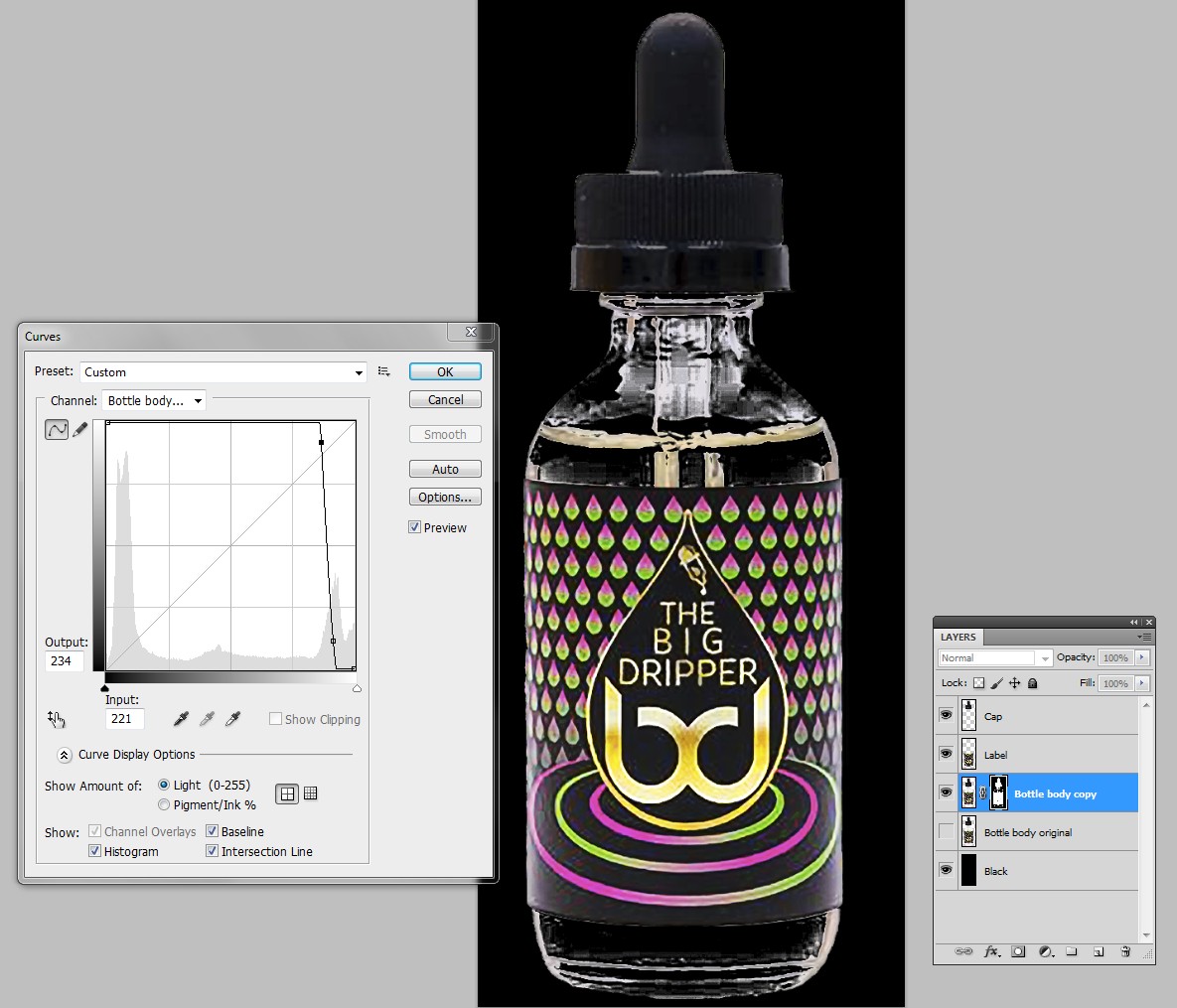 Label needs the same fix as before (no logo warping). The cap is also marginally better now. It's taken actually from another image. It needs own layer. But the main trick, fixing the glass is very different.

This method can be used also for other background colors than black. It's independent of the background.

If the background isn't black, it should be distorted heavily because the glass works like a bizarre lens. The bottle also affects the light on the background. These things are discussed here:

2
How to edit text that is in a jpg photo (using newer technology)?
3
Matching CMYK photo with Pantone colour
4
is Photoshop PDF any worse/better/different than one created in ID?
5
How can I improve this magazine page layout?
2
Suggestions on how to improve this logo?
6
Improve quality of image bars
1
How can this image be turned 'white'?
0
How can I improve this blending attempt?