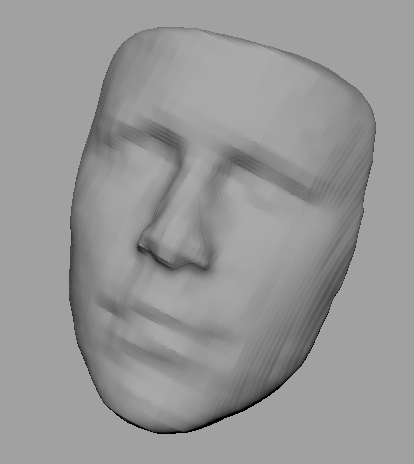 As you see the 3d model itself is not really super good, since it does not capure human detail. Offcourse projecting a texture of a face makes a big difference. Unfortunately this makes the tech unsuited for stuff like 3d printing or accurate relighting of the model.. But might be suitable for a game character.

Zach SaucierZach Saucier
12.7k1010 gold badges6060 silver badges104104 bronze badges
1
Add a comment  |
4
Want to improve this post? Provide detailed answers to this question, including citations and an explanation of why your answer is correct. Answers without enough detail may be edited or deleted.

I was looking for something similar and I think this is the best option for now: https://facegen.com/3dprint_demo.htm

is not completely automatic, but it is good enough even in the demo.

1
Importing highly complex(maybe vector) graphics[3D model] from PDF to Illustrator
1
How can I create a realistic 3d model from my 2d photos of furniture?
3
Where to get a 3D human face model as .obj file
1
How to create a spline from an AutoCAD .DWG file in 3ds Max?
2
How Would I Generate a Human Face Using Software?
2
Is there a 3D modeller that Auto-generates models from blueprints?
0
UV map for a model that has separate components
1
Export Model Textures Per Face
3
Is there a specific name for objects that changes based on perspective?
0
3D model from 2D mesh lines