What font is used on the studs of LEGO bricks?

I am looking for the font used for the stud of a LEGO brick.

For example the font in this image: 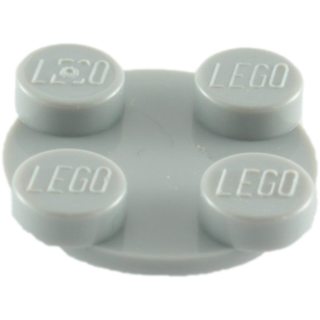 I tried several font identifying sites. They found about 100 more or less resembling candidates, but only in Pragmata Pro Italic all four characters matched.

To get any results I had to stretch your photo to compensate the tilted camera angle. Acceptable contrast was achieved by overdrawing the text. Fortunately only straight lines and simple arcs were needed.

The example pictured above is considered a modern stud logo that dates back to as early as 1963 and is still in use today. The logo itself may have some correlation to the manufacturing switch from cellulose acetate (CA) to the more stable and non-toxic acrylonitrile butadiene styrene (ABS) plastic, which additionally could be easily injection molded to more exacting tolerances than CA. In other words, more accurate molding may have opened the doors to molding such a light, modern typeface and relatively elegant detail. More discussion on this topic is probably more appropriate for the LEGO® Answers Forum but now that we're armed with some historical context, we can start to narrow down a time period to find a suitable font, or in this case, the typeface that the logo is derivative of (I'm in agreement with some of the earlier comments that this is indeed a logo and not a specific typeface).

Some other stylistic influences to keep in mind:

Keeping all of this in mind, my best guess for the LEGO® stud logo would be a modified version of Directors Gothic 210 Light Oblique:

Terminal of the G is a little longer in Directors Gothic and there seems to be a slight rounded quality to the letters in the molded version (possibly an unintended side effect of the manufacturing process on such a fine detail). Nonetheless, Directors Gothic was historically in existence and in use when these bricks were produced and it fits the clean, modern design styles that were prevalent in the 1960s.

Here's what MyFonts.com has to say about this font family:

Handcrafted by Lettering Inc as part of its core library of typefaces in the 1930s, Directors Gothic was dramatically expanded throughout the lifetime of the company and remains a timeless classic. Inspired by the Art Deco movement popular at the time of its creation, Directors Gothic was designed with an eye toward expanded utility for use in advertising headline and smart corporate materials.