Implementing the Dutch IJ digraph as a ligature

I'm designing a display typeface and having some trouble deciding how to implement the uppercase Dutch digraph "IJ". I have designed a ligature that combines the "I" and "J" to form what looks like a broken "U". 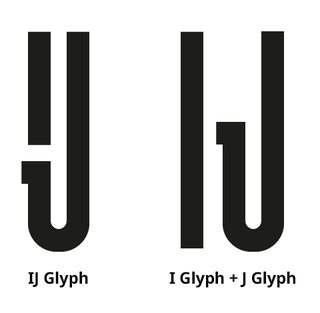 I'm going to include the ligature in the font, there is no question there, my only problem is how to implement it and make it available to users through OpenType features and the use of the IJ Unicode character. How should I consider the language/locale of the user? Should the ligature be the default;

Or an optional stylistic alternative;

Note, I'm asking about the technical implementation (through OpenType features) here; For critique of the ligature design itself see Is this Dutch IJ ligature suitable and readable to native speakers?.

Assuming that your Ĳ glyph is appropriate to the Dutch eye (which I cannot tell), it should be used as a ligature for I+J by default for Dutch texts.

While you can restrict every OpenType feature to specific locales, the arguably best way to do this would be via the feature locl, which is specifically reserved for such purposes. The OpenType cookbook uses this very case as an example:

If the user properly sets the locale of the text, this should ensure that the ligature is used in Dutch text, but not for any other language. (Sidenote: It should not be activated for Afrikaans, as the absence of Ĳ is one of the distinguishing features of Afrikaans orthography.)

I do not see any reason to not use your ligature for the Ĳ Unicode character (U+0132), as there is no legitimate use of this character outside the Dutch language and in Dutch it should not be used for the exceptions.

It would be considered incorrect, but such cases are the exception. Also such exception exist for almost every ligature. E.g., in German, you would not have the typical ligatures involving the letter f in the composite words such as Auffahrt or Kaufleute.

There are two ways to deal with this:

Not the answer you're looking for? Browse other questions tagged typography font-design glyphs opentype or ask your own question.

8
Is this Dutch IJ ligature suitable and readable to native speakers?

9
How does random choice of alternate characters work in OpenType fonts?
26
What's the practical difference between a 'glyph' and a 'character'?
3
What's the technical term for groups of glyphs in an OpenType font?
5
OpenType Features - Adaptable typefaces
12
How to design the letter ß (eszett or sharp S)
1
How to automate creation of OpenType features based on glyph and/or class names?
8
Is this Dutch IJ ligature suitable and readable to native speakers?
3
Creating final forms with FontForge
0
How to Create Compound Characters Inside a Font