I'm in dire need of your vast knowledge as I'm stuck with large issue. I'v been trying to research this problem as much as possible but at this moment I hit the wall without proper solution. Let me give you some background.

Disclaimer - I'm graphic designer but I came from digital background and my knowledge in print is very limited. So sorry for any mistakes.

The company I work for ordered two large scale artworks that were supposed to be printed as a wallpaper. Artwork was designed by agency and delivered to us. We sent that to printing company we use on day to day basis. The first print, which consists of smaller part of large artwork came out fine. But the second one not. We naturally contacted printing company. They came to our office, checked the artwork and told us that ok, they see the issue but not everything is their fault. So we contacted the agency and told them about our problem. The answer we got is "that's not our fault, it's print issue". And that's where I need your help - I try to be polite as possible with both printers and agency but at this moment my knowledge is not sufficient enough and I'm starting to think that the agency is trying to push their fault on printing office.

There are two artworks, that were supposed to be wallpapers for hallway. Smaller one consists of detail from the larger one. Both of them were delivered to us as .tiff files.

For the purpose of this issue I'll be operating only on small detail from whole artwork as an example.

I assume that files are prepared in 1:10 scale.

First thing that I noticed is that - artworks were prepared in Illustrator, as a whole so why agency delivered this to us as .tiff file? I know that due to compression .tiff files are used for large scale printing but to my knowledge, when you use vector image there's no point in making a raster from it. Especially using LZW compression.

Second thing that I started to wonder is why they delivered such large artwork in one piece, instead of bunch of smaller ones?

So...the small one came out ok. It's sharp, and looks cool printed. The larger one didn't. Let me show this on part that is present on both artworks. Both photos are done from roughly the same height and distance, under similar condition. What's worth mentioning is that on the bigger artwork the figure has been scaled down.

Notice how brush details (that I assume are vector brush) are much more blurred out. Here's the directly from photoshop - same image, 100% enlargement.

Notice that on bigger artwork the figure is scaled down roughly 50%.

So here is what I came up with - firstly, on smaller artwork the figure is simply bigger so the printer have more space to print the details. On bigger artwork figure has been scaled down so it's harder to came up with the details, especially that it has been scaled down and saved as .tiff with LZW compression. So in order to make the file size smaller, details has been rastered and then compressed.

Secondly guys from agency have been sending us print screens from photoshop (same as I've pasted with comparison of both artworks) from macintosh. So I started to think that well, when you're using either retina display or 5k display you should be sending images on 200% enlargement instead of 100% enlargement (well, I came from digital, not print background so I might be wrong)

BUT as for now, I've hit dead end and I need your help. If you need any more details or information, please let me know - i think I might not explained this properly but you're my last resort. Thanks in advance.

Thanks guys for answer!

Here's few information - file was sent not as PDF but as tiff. That's my main concern - Most of the artwork were prepared in illustrator I assume, then it was copied to PS and flatten as in PS there's only one layer. The tiff is scaled down (10 times, so dimensions are 362cm/30cm).

The second thing is this: 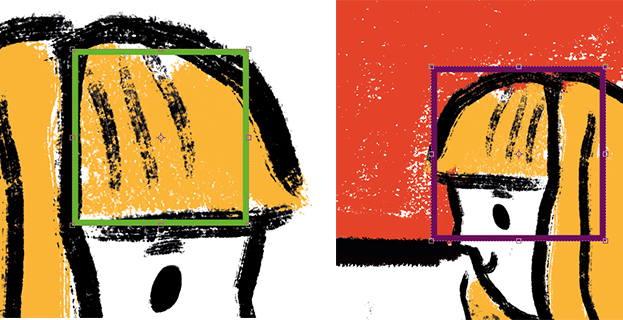 Both squares have 1cm on 1cm

So the surface for details is much smaller. Even if the original wall size is 37 meters on 3 meters

And here's the info from photoshop 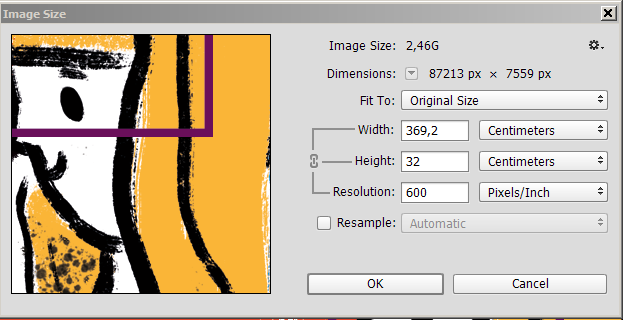 With this dimensions I assume the native resolution is around 620 px/inch. So the print size would have 62 px/inch. That's pretty good IMHO and the picture should look crisp.
BUT
From the picture you shoved it seems that the print was not done from that file. Or the resolution was changed. Like they used changed ppi in the native size file to 62 and then upscaled the dimensions to desired one.

In photoshop it's simple math. You untick the resample image and just change resolution. PS does the math for you.
BUT They could do that on the printing machine which have different algorithm and first change the ppi and then resample image to 37m.

They just printed from the preview file.

That's a lot of information!

It's difficult to give you an absolutely definitive answer without being in the room with you to interrogate the files and see the print with my own eyes, but here is my best take, given what you have shared:

If I take the 'bigger' artwork screenshot that you have taken from Photoshop and scale it to roughly the same size as your photo of the bigger print then this is what I get: 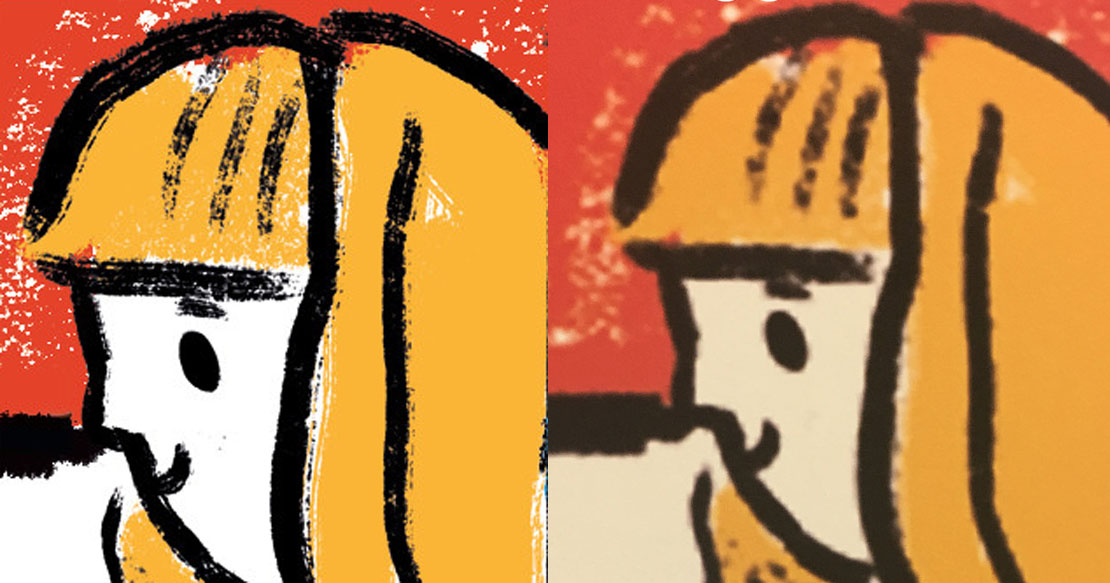 It's obvious that the artwork (left) contains more detail than is present in the print (right) and that the print looks pixelated (unless that's your camera).

So... Assuming that the artwork file is what was sent to the printer and that it was sent in an appropriate file format (i.e. not a 'smallest file size' PDF or something like that) and that your photograph is a fair representation of the printed version then it's safe to assume that the problem lies with the print company. Whatever they have done, they have lost some image quality and detail.

This kind of argument can be very hard to settle, but I would suggest as next steps to double check that the correct, high res file was released to the printer and then maybe ask the printer to send you back the file that they have used and/or share a screenshot of how the artwork looks on their screen. They will doubtless be reluctant to re-print the job at their cost unless you can conclusively prove that they made a boo-boo. Good luck!

I also have the feeling that there is a problem with the printer.

1) It really does not matter that the face of the girl is smaller on the bigger print, the crispness of the lines should be the same. Your photos have a good reference that is that metal blue plate. They are not exactly at the same distance but fair enough, and you can see clearly a diference.

The vertical dimensions are very clear, they are the same.

But there is a clear interpolation on the second image, which does not show on the "original".

My conclusion is that the image was "too big" for the operator to handle and reduce it to "speed up" things.

Not the answer you're looking for? Browse other questions tagged adobe-photoshop adobe-illustrator print-design print-production or ask your own question.

0
Will a white box in the lower layer cause overprinting issues?
0
Workflow and tools recommendation for detailed large print and web project
3
Large format pdf - can't save?
1
Can I make these very large Illustrator files smaller? Can linked files be increasing the size?
0
How to reduce my Illustrator file size and should I raster my bristle brushes?
1
Exporting Scaled Down Artwork to PDF for Large Scale Print
0
Questions about Envelope Design to Print using Home Printer?