I have a book layout established with a 3mm bleed on all four sides and several full-page photographs used throughout. I understand that many have issues with the treatment of bleeds when exporting a PDF from a spread layout, with suggestions to remove bleeds from one side, etc. I have also seen suggestions to leave the seemingly quirky results as they are, they will print fine and are intended.

What is gained from this and will these strips be hidden in the spine binding, or are they sheared off as they're inside the 3mm bleed of the neighbour page? Otherwise I can see the concern that people have

Example of the bleed from the opposite spread page appearing on the spine-edge to the right (saved as cropped height, full width):

Edit: There appears to be some misunderstanding of elements of my description so I'm adding the following illustration with description: 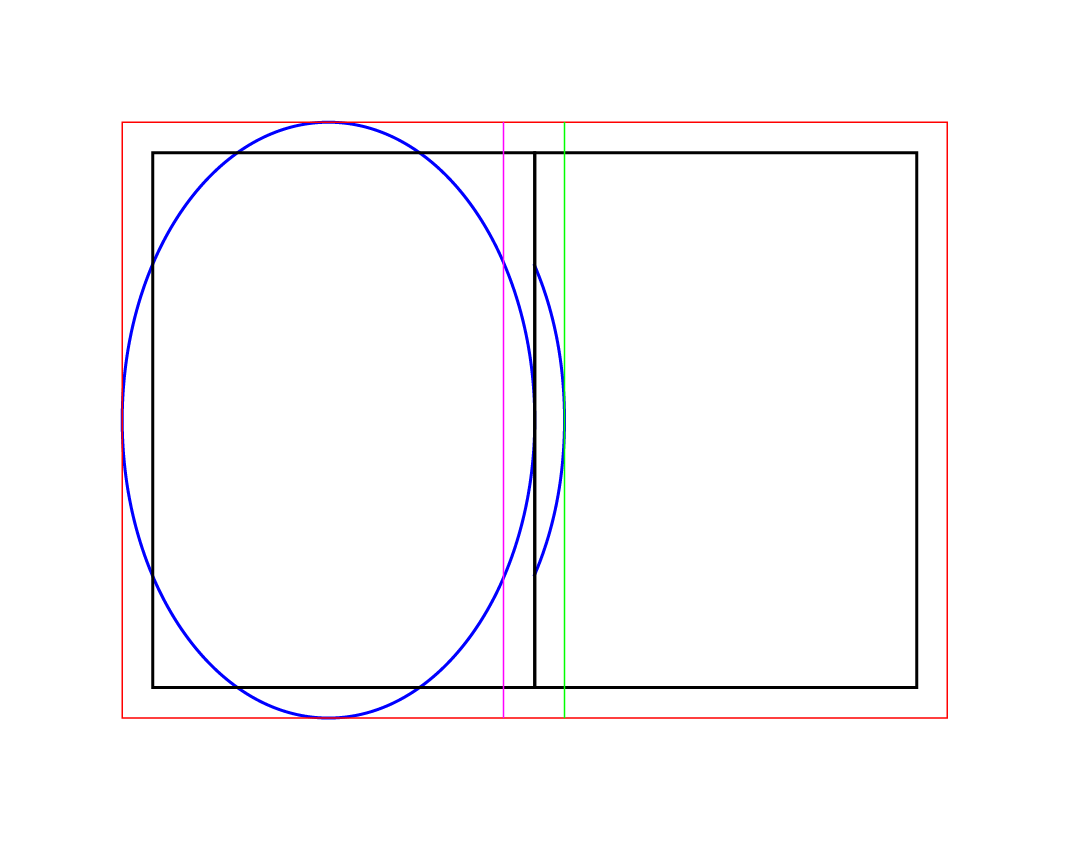 In this spread example (in black) there is a 3mm bleed active on all 4 sides (in red). InDesign doesn't visualise the inner bleed so I've placed a pink and green line line where the bleed may be potentially located (if it's not using the inner edge as both an edge and a bleed edge).

On the three outer edges, the output pdf shows that it will trim away anything that lays between the page edge (black) and bleed edge (red), as expected. On the inner edge, the output pdf has copied (not trimmed) a strip of the image 3mm inwards from the spine (up to the pink line) and duplicated it onto the bleed area of the neighbouring page, nested against the contents that exist on the page. Let's call that duplicated strip an orphan.

What is the purpose of duplicating the orphan to the opposite page? What function does it serve in printing, ignoring whether it was correct or not to include an inside bleed? Why did InDesign not just omit it in this particular circumstance or include it in a bleed area on the same page of the PDF? What dictates that the bleed was now 3mm inside the page edge, but not visualised as such? This is what I meant by an irregular rule. It doesn't follow the logic of the other 3 sides, though I am aware that InDesign has a different problem to solve with an inner bleed.

For what it's worth: I am actually using a non-spread solution to print this book (using the page shuffle off option) but am trying my best to understand why InDesign is placing the bleed on the opposite page of the PDF to better my understanding of design for print.

Saying that Indesign does deliberately set up bleed on the inside is quite not right: bleeding is set up by user. As you pointed it out, it is possible - and easy - to export a PDF without inside bleed.
If your document is printed by a professional printer, you shouldn't care about inside bleed. While imposing your document, the printer will deal with it.
Now, why should you leave it by default? Because, depending on paper weight and number of pages, compensation may be necessary:

Compensation is part of imposition process and will be handled by the printer.

There's a few issues I can see here...

If you're working with spreads and need to export single pages with full bleed and don't want the bleed to come from the opposite page then there is a workaround explained here (Basically, separate your pages): InDesign Secrets – Breaking Pages Apart to Bleed Off a Spine

To address your illustrated example; that's not really how it works. Remember that the whole point of a bleed is to be trimmed. So in most cases you won't see anything duplicated. An illustrated example of how it should really work would look something like this: 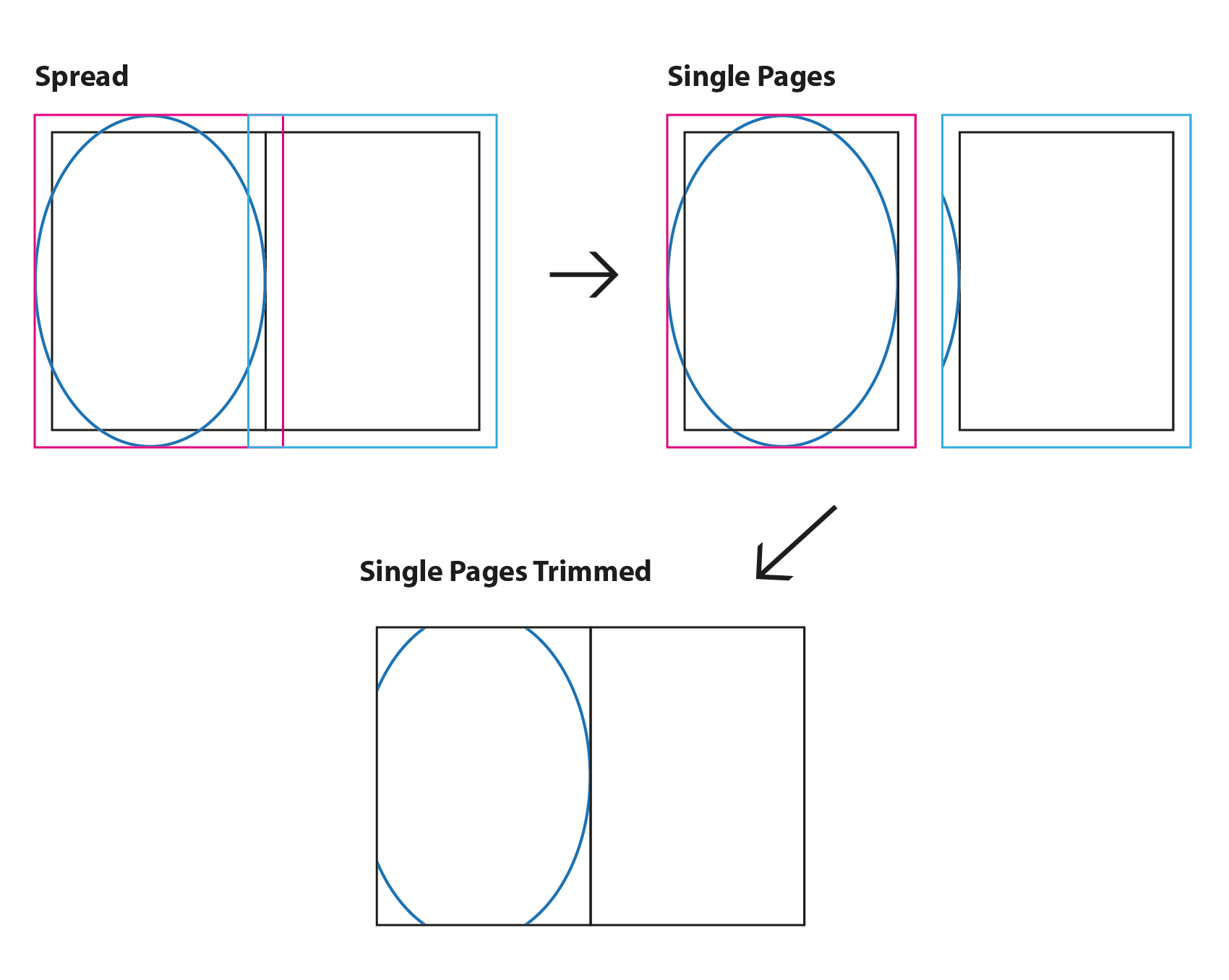 It doesn't always work like that and the duplicated content in the bleed can cause issues, but that isn't a problem with InDesign but a workflow issue (InDesign can't magically create you a non-existent bleed).

As for why the inside bleed may be needed; When you're working with a large number of pages (generally saddle-stitched), you (or your printer) may need to compensate for something called creep. 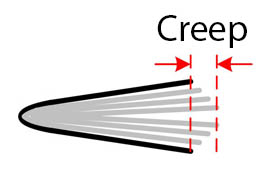 If you simply print your spreads as-is and trim the excess then you'll be cutting off valuable page space and ruining your carefully measured layout.

You (or your printer) can get around this by shifting each page by an appropriate amount. Having a full bleed simply gives you more to work with.

Although creep shouldn't be an issue for perfect bound books, the pages are printed as single pages and having bleed on all sides can be useful since pages often don't open flat;

You're used to seeing book open like this, right? 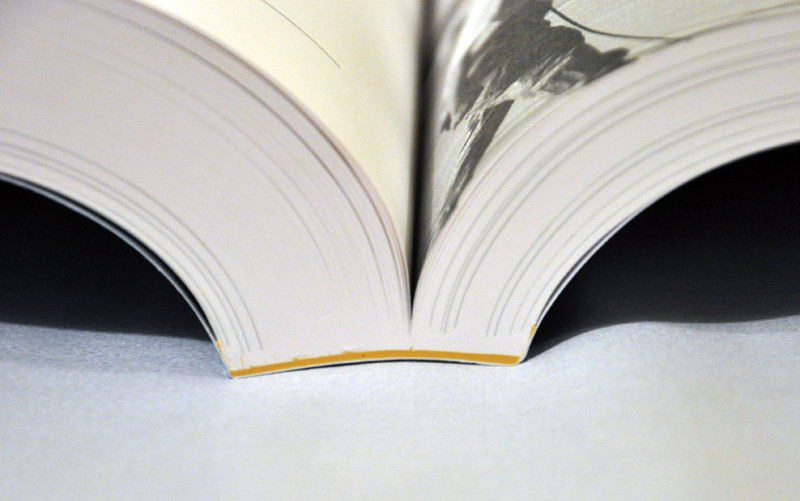 Without an inside bleed you'll either be losing parts of your page or seeing a sliver of unprinted paper on the inside, neither of which you want. It's not always an issue, but it can be. Even if you don't think the bleed is necessary, it's always better to have a bleed and not need it than have no bleed and need it further down the line.

So, to sum up: InDesign will only create a bleed where you tell it to; the bleed comes from the opposite page because that's the only place it can come from; and inside bleeds are useful for the printing process itself.

From the fantastic input had to this question and further reading, the answer to the question 'What is the purpose in InDesign's spread bleeding onto the facing page' is that there is not really a functional purpose but it is more so what the developers in Adobe chose as the solution to a difficult option to interpret successfully.

They could have chosen to ignore/leave the inner bleed area blank if it's part of a spread, as the existence of a defined area for the inner bleed is there and not there, or could be seen as blank - depending on how you interpret it. They chose to honour the deliberate selection and input of an inner bleed and had to determine how best to interpret that in this unorthodox situation when compared to non-spread bleeds.

Touching on another area of the resulting discussion:

InDesign doesn't actually show the inner bleed lines illustrated but it's interpreting them as shown. When exporting, each page treats the neighbour in its spread as a flat, seamless extension of itself and, using this logic (forget any creases or binding interpretations of a physical spread), it has found the additional bleed area beyond its page trim in its neighbour. When the pages are now separated it shows the remnants of this interpretation. The red and blue area of Cai's illustration demonstrate this well.

The fact that interpreting the inner bleed of a spread export in this manner doesn't serve a very useful function is of no consequence to most output. For most situations all the added detail in question will be trimmed off. Cai and Vinny have discussed this aspect in greater detail.

I personally chose to work with separated pages in the end, before export.

Not the answer you're looking for? Browse other questions tagged adobe-indesign print-design pdf bleed or ask your own question.

4
How to create a document with alternating (left and right) master pages without working in spreads?
1
Double Page Spread Bleed

4
How to have full bleed between two facing pages Indesign
3
How to export an InDesign file to PDF that is going to be spiral bound
7
InDesign: "page bleed" with pictures spanning on two pages
0
How can I enable inner bleeds with prime faces enabled in InDesign?
4
How to create a document with alternating (left and right) master pages without working in spreads?
0
InDesign: how to properly set bleed and trim marks?
3
InDesign CS5.5/CS6: How to work with facing pages, but retain bleed area all around each page?
0
How to add bleed in an image in inDesign which has important details around the edge that should not be cropped?
2
InDesign zero inner bleed not possible