After Effects expressions to sum numbers and control charts

I would like to build a project in which I will change two numbers and all of the following take place automatically! I'll Explain... 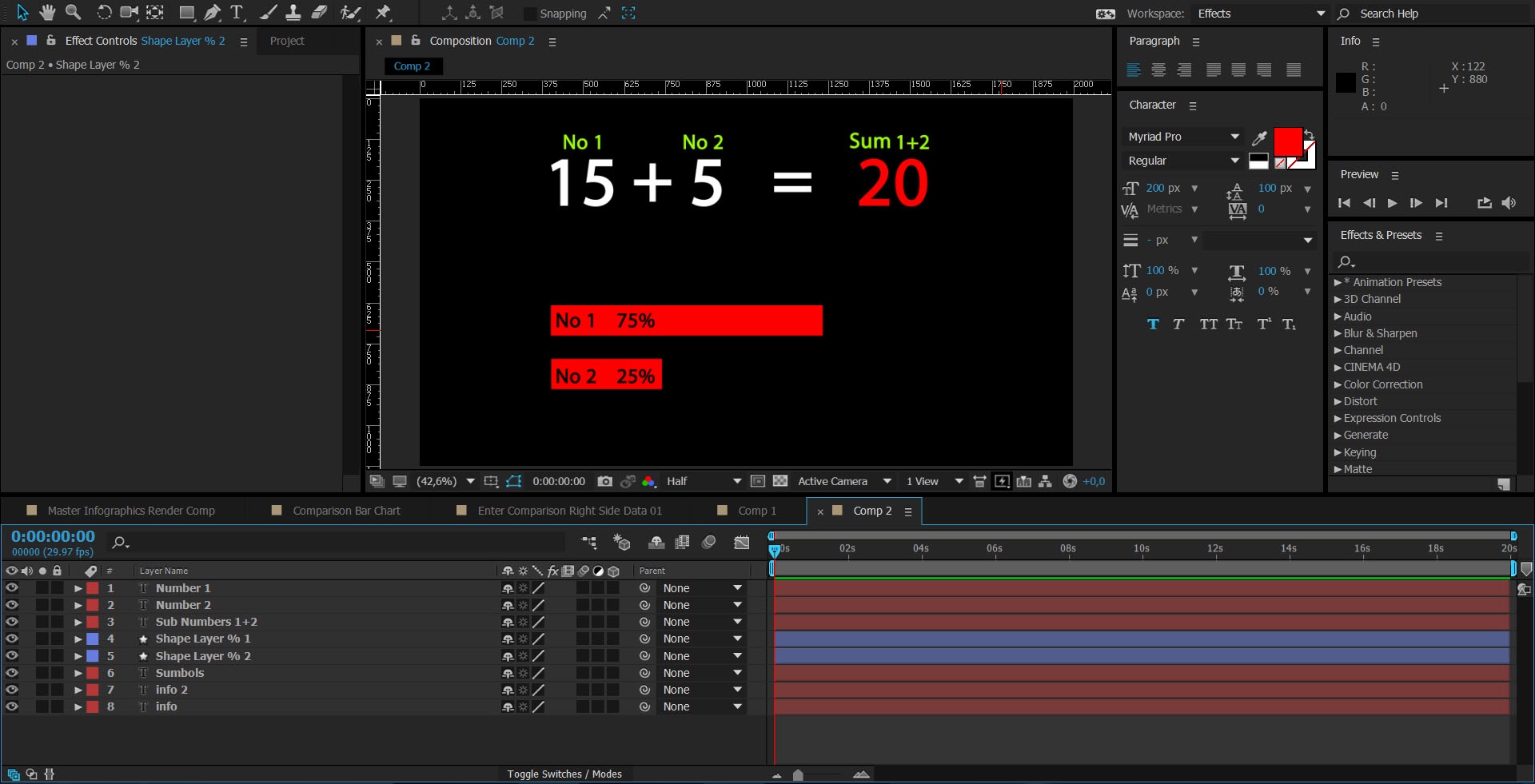 Next, I would like to built a chart below to update automatically according to the numbers that I gave.

Probably I need for the value of the numbers a Solid with a Numbers effect and not a text? And if someone knows the expressions...

Create a null object (Layer → New → Null Object) and add a slider expression control to that null object by going to (Effect → Expression Controls → Slider Control). This gives us a handy slider in the Effects panel that we can use as an input in expressions.

Create a new text layer to show our input from the slider. Open the "Text" property and alt+click the stopwatch next to "Source Text" to add an expression to the text itself. The expression we need is:

The Math.round() just means we get an integer, otherwise we get a ton of decimal places. The rest simply gets the value from the slider from the correct layer.

3. Putting it all together

Repeat the same steps as above for your second input (so you need a total of 2 null objects, each with a slider, and 2 text layers with an expression pulling the value from the correct slider (simply change layer("Val 1") in both expressions to reference the correct layer names).

For your sum total text you need another text layer with an expression pulling both slider values and adding the values together. Something like:

We can use the same concept to set up our bars. Create your bars at 100% width (you should also move the bar's anchor to the far left, or where ever you want them to scale from). You can then add an expression on the layer's scale property to pull in the slider values and do the calculations you already mention. Something like:

The finished thing looks something like this; just select your null objects and adjust the sliders and everything will automatically update for you:

This was a quick example and could definitely be improved; the text could probably just be done on a single layer and the bars update on the raw slider values while the text only shows a rounded integer, which may or may not be what you want...

Actually, here's a more compact version with both sliders added to a single text layer:

You can read more about using expressions here:

Not the answer you're looking for? Browse other questions tagged automation adobe-after-effects javascript chart-design or ask your own question.

10
Charts that communicate completeness / 100%
2
Can InDesign CS6 automatically update figure and step numbers for consumer instruction revisions?
1
Is it possible to resynchronize after effects source name with its corresponding photoshop layer name after renaming the source name in after effects?
1
How do I correlate different effects' values to another dynamically?
1
InDesign: how to solve this numbering issue?
1
Attach an image next to animated numbers counting up [After Effects]
1
How to automatically create tally charts?
0
In After Effects how do i link a value in a shape layer to a slider control keeping the values relative?
0
InDesign: building charts in EPS or Javascript
1
numbers and units in InDesign: Is there an easy way to do this?