How were Apollinaire’s Calligrammes typeset?

How were Apollinaire’s Calligrammes typeset? 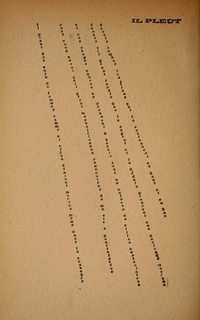 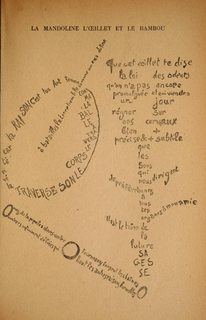 Was it set on a letterpress? Linotype? How were the curved lines achieved? I can't seem to find anything online about this, but I am very curious.

Before I get into my explaination, I found a couple of interesting historical notes about Apollonaire and this particular edition of Calligrammes: Poems of Peace and War 1913-1916.

Shortly after his death [9 November 1918], Mercure de France published Calligrammes, a collection of his concrete poetry (poetry in which typography and layout adds to the overall effect), and more orthodox, though still modernist poems informed by Apollinaire's experiences in the First World War and in which he often used the technique of automatic writing.

Apollinaire initially sketched his Calligrames in notebooks or on scattered pieces of paper, and then carried his sketches to a typesetter who would set the letters and words on the page following Apollinaire’s design.

To answer the question, the sample in your original post is most likely manually typeset, possibly with the aid of a Monotype Super-Caster machine. Below are a couple of reasons to back up my claim.

While Linotype was indeed a prominent typesetting technique at the time, and would give you the similar evidence of an industrial press machine at work (it is mechanical letterpress after all), the process, or hot metal typesetting, was developed specifically to produce molds of straight lines or strips of custom type in one block:

The linotype machine operator enters text on a 90-character keyboard. The machine assembles matrices, which are molds for the letter forms, in a line. The assembled line is then cast as a single piece, called a slug, of type metal in a process known as hot metal typesetting.

Because of this limitation, we can safely rule out Linotype for any of the Calligrammes in this edition. However, it can't be ruled out for some of the other poems throughout the book that are comprised of straight lines of text.

The Case for Monotype

The Monotype casting machine uses a similar process to Linotype but differs in that it produces individual letters instead of full lines of text:

The Monotype machine worked by casting letters from "hot metal" (molten metal) as pieces of type. Thus spelling mistakes could be corrected by adding or removing individual letters. This was particularly useful for "quality" printing - such as books. In contrast, the Linotype machine formed a complete line of type in one bar.

While the idea of mechanized typesetting was to produce more precise, straight-ruled lines and blocks of text, the Monotype letters/characters could theoretically be typeset manually if desired:

The Super-caster, another machine produced by Monotype, was similar in function to the Thompson, Bath, pivotal and others casters but designed to produce single type (including even larger sizes) for hand setting.

The Calligrammes are an idealisation of free verse poetry and typographical precision in an era when typography is reaching a brilliant end to its career, at the dawn of the new means of reproduction that are the cinema and the phonograph.

Guillaume Apollinaire, in a letter to André Billy (from Calligrammes: WIkipedia entry)

I know this may not be the definitive answer you're looking for, but it might steer you in the right direction if you're not satisfied. This is a beautiful print specimen, thank you for sharing!

I'm not an expert on metal printing, but the image on the left would probably have been typeset very simply using ordinary metal type, held in place using pieces of spacing material, and then printed on a press. That link goes to a guide.

The suggestions above are way too complicated. Hot metal typesetting (Monotype and Linotype machines) was a technology used mostly for advanced printers for large editions or many volumes (like newspaper and mass-market book printing), although it did get more widely used towards the end of the metal type era as the machines got cheaper. Monotype Super Casters were machines used to cast large type for posters. Not this kind of avant-garde stuff in small editions, for which its benefits would not have been much use anyway.

The image on the right is hand-lettered, not type. I'm not sure what method would have been used to set it, but possibly an engraving of some kind.

CopilotCopilot
1,26966 silver badges88 bronze badges
add a comment  |
-4
Want to improve this post? Provide detailed answers to this question, including citations and an explanation of why your answer is correct. Answers without enough detail may be edited or deleted.

It must be Linotype, as I think its too hard to set it up in letterpress.

Not the answer you're looking for? Browse other questions tagged print-design typography print-production history or ask your own question.