In Adobe Illustrator, I am trying to create a set of shapes that are supposed to look as if they were carved into a surface, i.e. stone (the shapes will also have a Grain-Effect applied to them in order to get a less smooth/clean look).

However, all my attempts so far lead to the shape looking like it is sitting on top of the surface, like an embossing. I have tried working with gradients to achieve the carving, but that also does not seem to go into the right direction. Take a look at the images to below to see my current results. Alongside I have posted an image of an actual carving which basically shows the visual impression I would like to create.

Can anyone help me figure out how I might have to go about this? 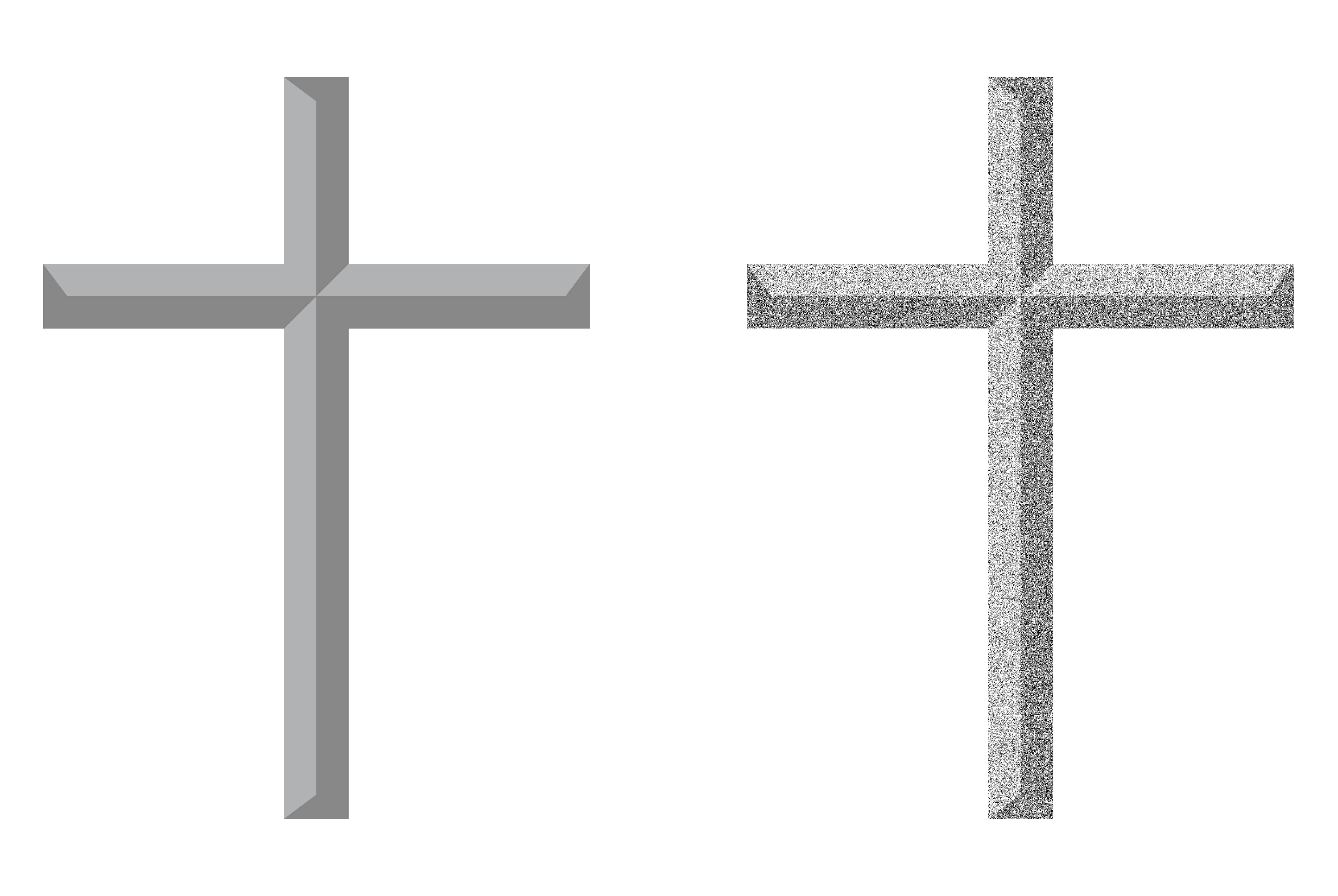 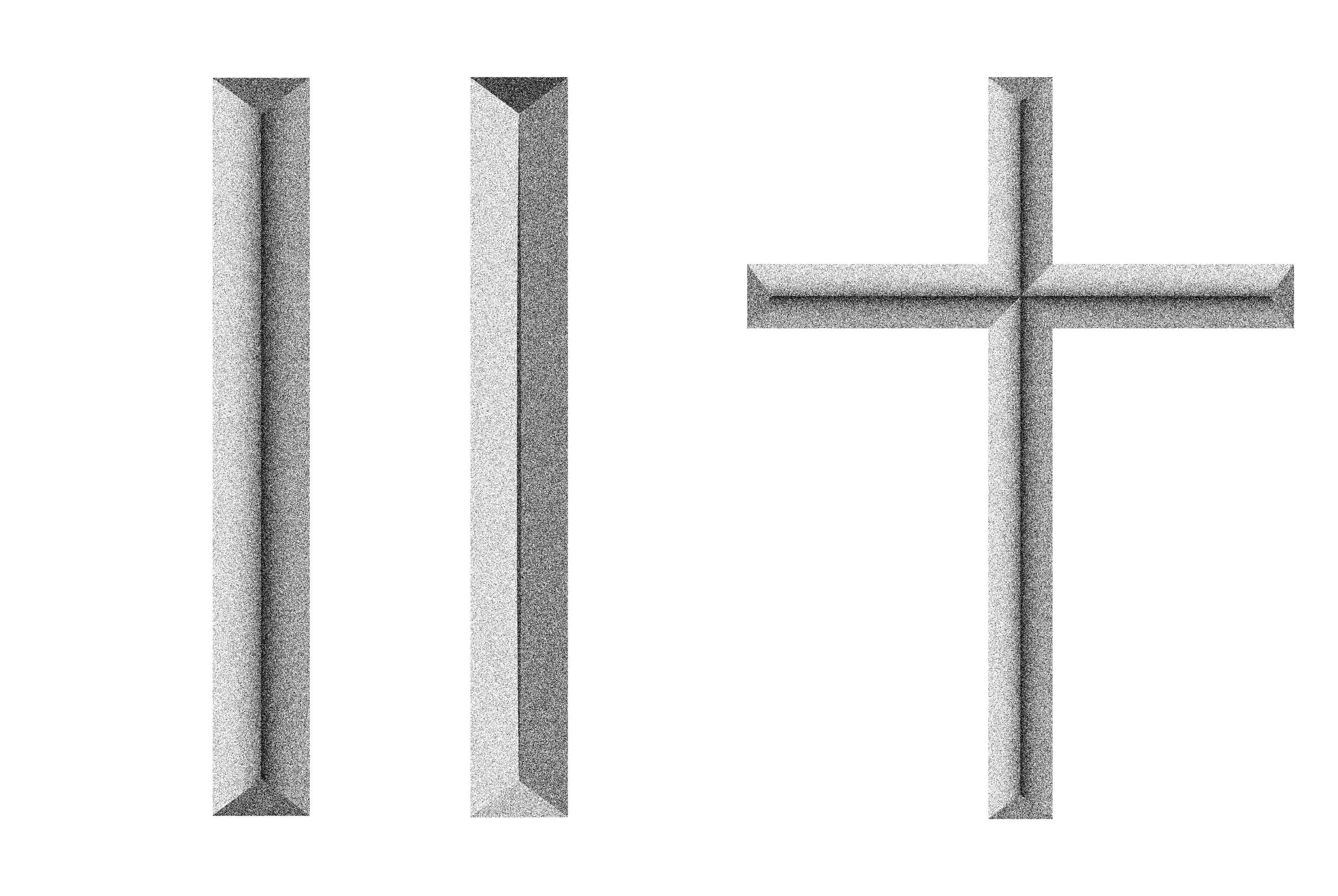 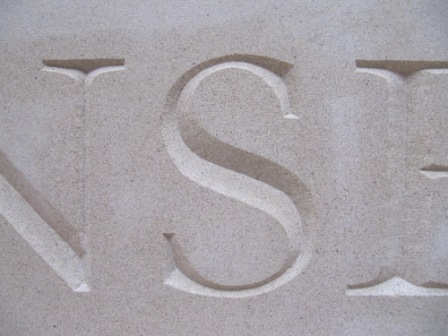 Here are some practical tests with 3D program. It's SketchUP free. It cannot make shiny highlights, but shades matt surfaces quite well.

At first a coarse copy of your shape. It's seen straight onto face: 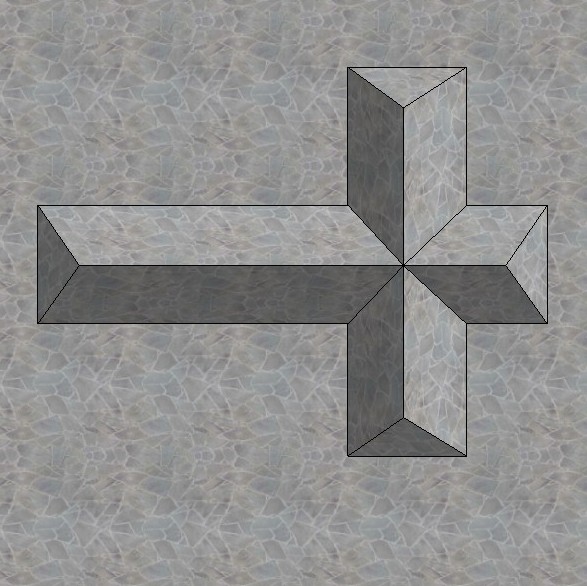 It's exactly like yours - it seems to be a protrusion. The shading is like the embossing effect - no geometric shades, only the angle between the light and the surface is taken into the account.

Now the geometric shades are on. The edge of the slope throws a shadow over the opposite slope: 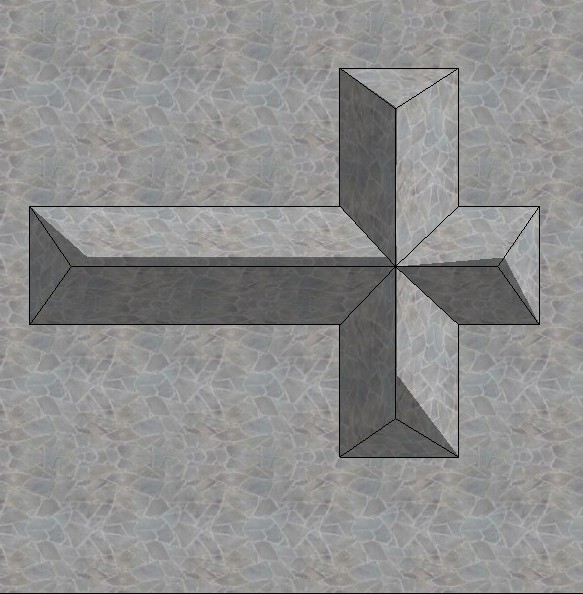 It should be more like an engraving, but in my eye it still turns to be a protrusion, only a bizarre one. Proper shadow can't remowe the misinterpretation.

Next so tilted wiewing angle that part of the engraving is hidden behind the edges:

Now the false protrusion is gone, at least it is so bizarre that I can see only the engraving.

As soon as the view shows the bottom of the engraving, it turns again to a bizarre protrusion: 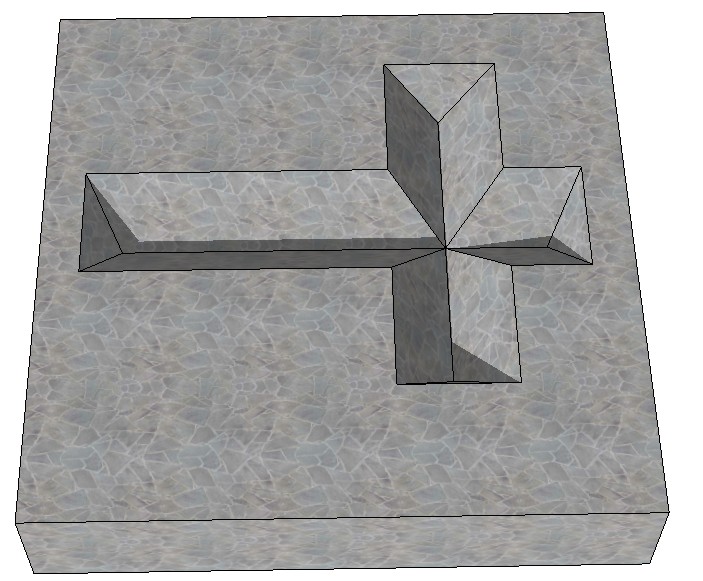 Watching from the other side helps a little because often the light comes from up to down. In that scenario this is an engraving, but it still can be considered to be a very bizarre protrusion or even an object that is partially off the surface. 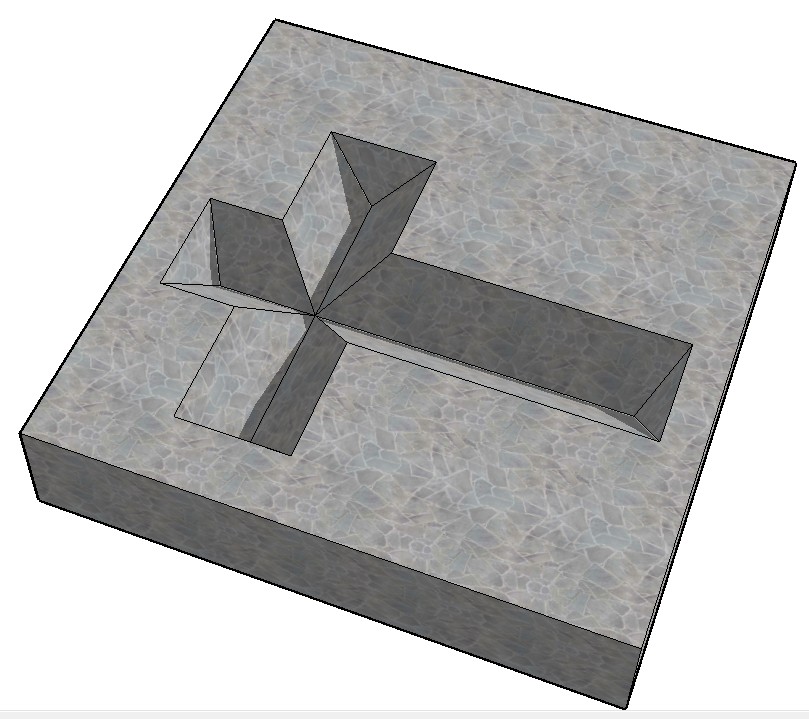 Next add a few other elements. They and their shadows kick the eye back to the road. This is because one can follow the long shadows along the surface. 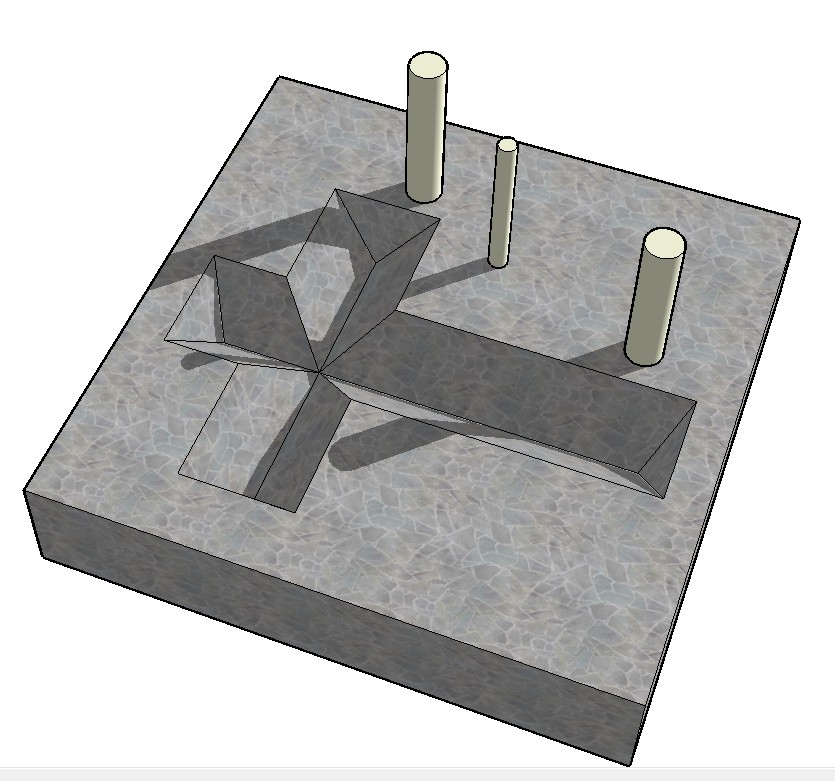 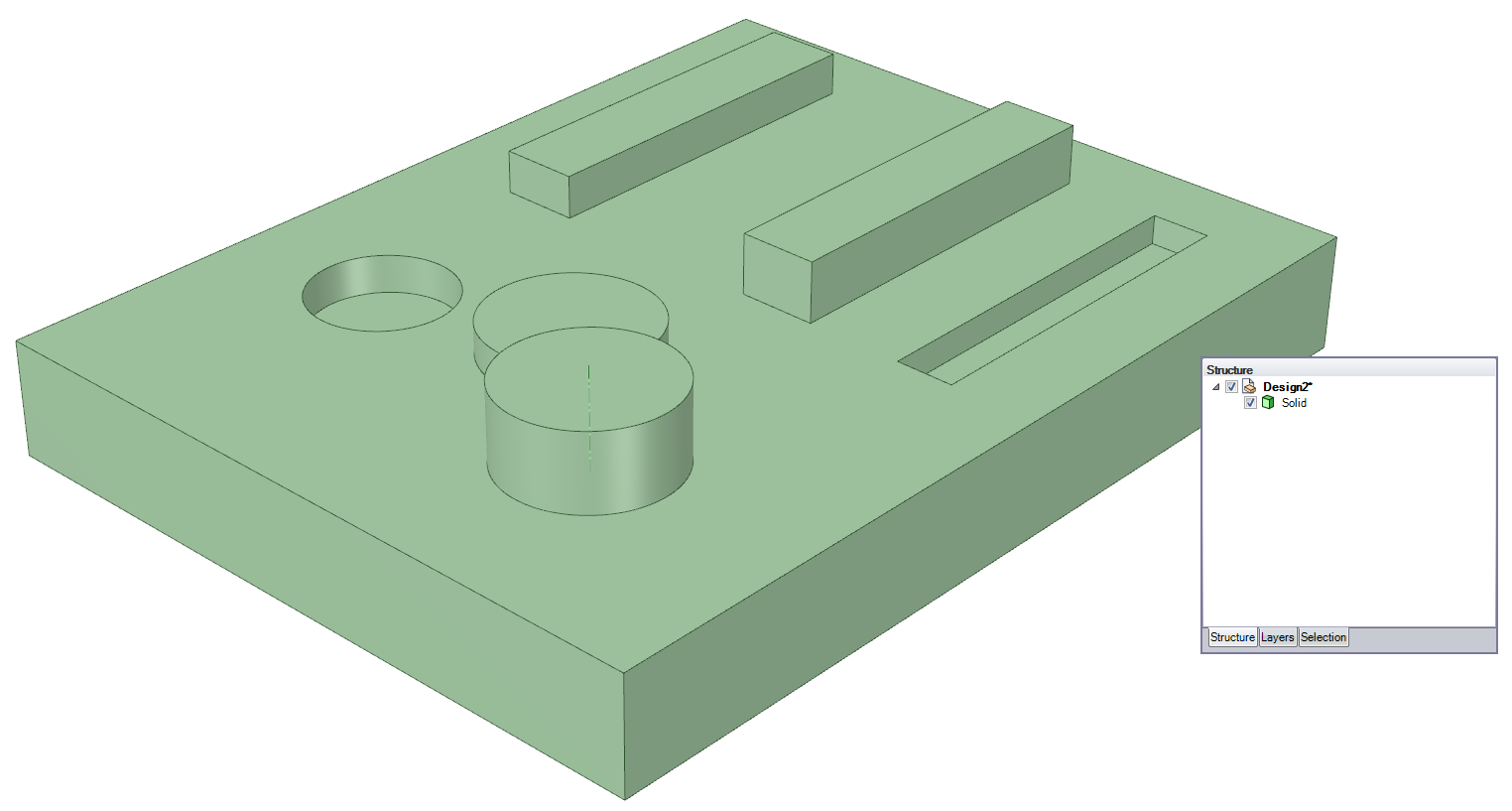 Long shadows alone do not not fix it, if the viewing is straight onto face and the intrusions and protrusions have totally different style: 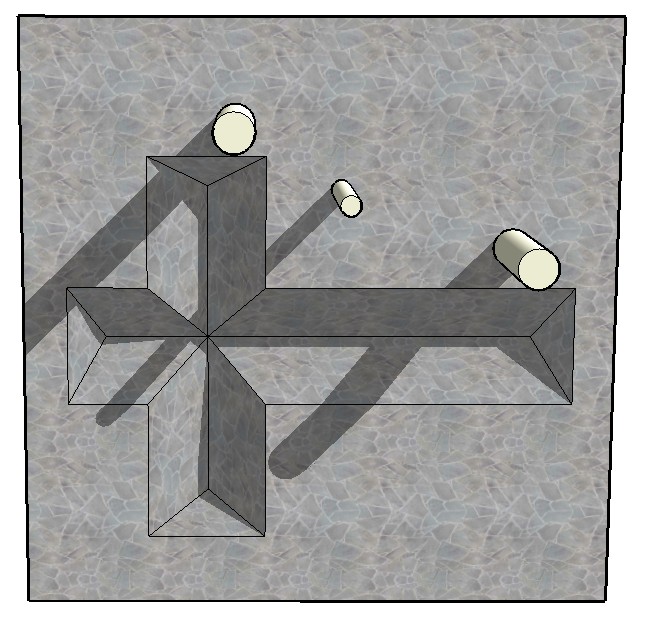 What to do? Well, I cannot prove it, but if there were some shiny highlights, they surely would give some good quidance to the eye and the wanted illusion would be more probable.

Another possiblity is to have 3D surface texture. Our texture was only a flat painting. It has no own shadows and highlights. The rendering of a real 3D texture depends much more on the direction of the light.

A thesis: The engraving-protrusion ambiquity really comes from the flat planar surfaces. Coarse enough 3D texture do not have it.

Actually this is not a loose thesis. This is something that I can prove. See a coarse, but definitely a 3D texture and compare it with the 2 first opening images. 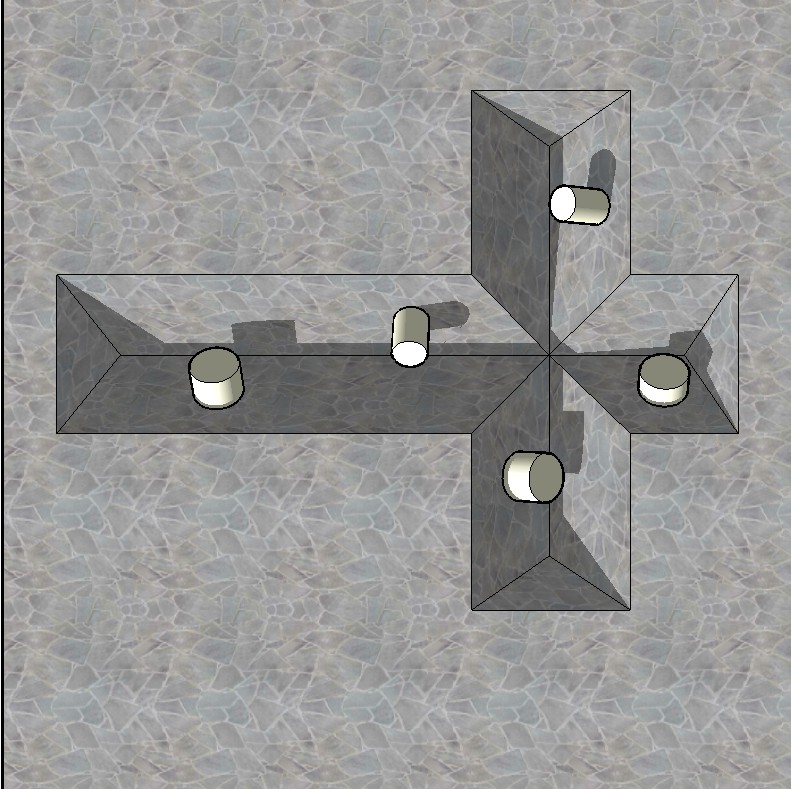 ADDENDUM: I have done additional tests. A real 3D texture loses its effect as soon as the texture is so small that one sees a textured surface, not a complex 3D structure. The eye sees again the planes and makes the same protrusion error. At the same time the texture turns to its negation.

If the pieces in the texture are all of the same size and their orientation on one planar surface is the same, the texture is practically useless even in quite big size.

Well your crosses could be carved into the surface if the lighting is coming from the bottom right. That's uncommon, so maybe flip the light and dark sides.

Actually, carving in or out can be difficult for people to see out of context. See here or google "einstein mask illusion"

So add some context. Maybe add a pattern to the whitespace, or put a shadow nearby to make it clear which way the light is shining.

3
Adobe Illustrator: Deboss or Engrave Effect
1
How can I make this button pushed?
0
Gimp: making sunken relief lettering (gold) on textured surface
-1
How to carve/engrave a semi sphere?