I'm fairly weak in my GIMP skills but I would really like to improve. I'm trying to create a realistic gold surface in GIMP. I've created a reasonable image here using the gold gradient, a curve shift for the edge of the medallion, and bump mapping for the pressed image. However the gold needs work.

The gradient lines are too straight and consistent, which may work on specific objects but not so well for the coin.

How can I improve the surface effect? 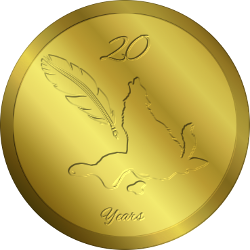 And here's a real medal: 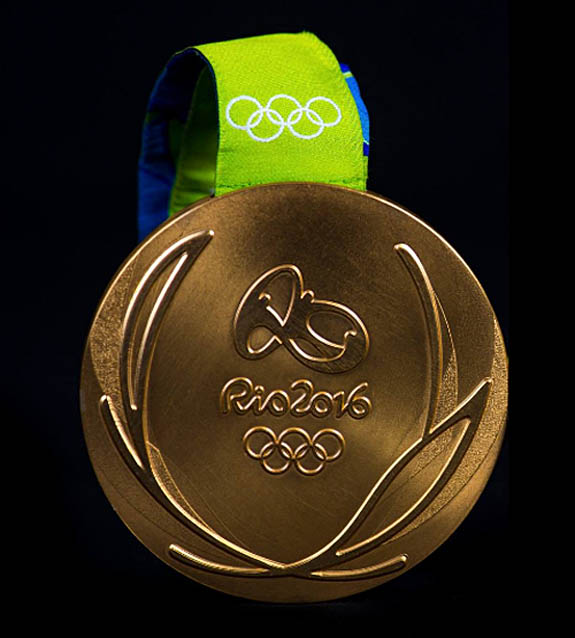 Part of the "problem" for anyone relatively new to Gimp is that there are often many ways to reach any desired outcome and the desired outcome is always a personal preference. Hopefully you will get many answers with alternative solutions.

Based on your description and attached medal, I presume you have been watching "How to create gold medal with GIMP" tutorial on YouTube by Jose Navas which is an ok tutorial and intro to using bump maps in Gimp. The "Gold Gradient" used in the tutorial is not necessarily the best way to start but since you've already chosen that path, here are some methods and filters you can play with. Try different combinations. Always first make a copy of the layer you wish to modify. Play with Layer Opacity Values and Layer Blend Modes. Since you already know how to use bump maps, an easy way to proceed might be to search and download "Gold Medal Textures", open them as layers and use them as bump maps in the same manner as you did with pressed image.

I would suggest you first install G'MIC Plugin for Gimp. That way you have more filters and options.

In the samples below I've typically used layer opacity values between 20-50 percent so effects are subtle. Hopefully you can see some differencies when zooming in. 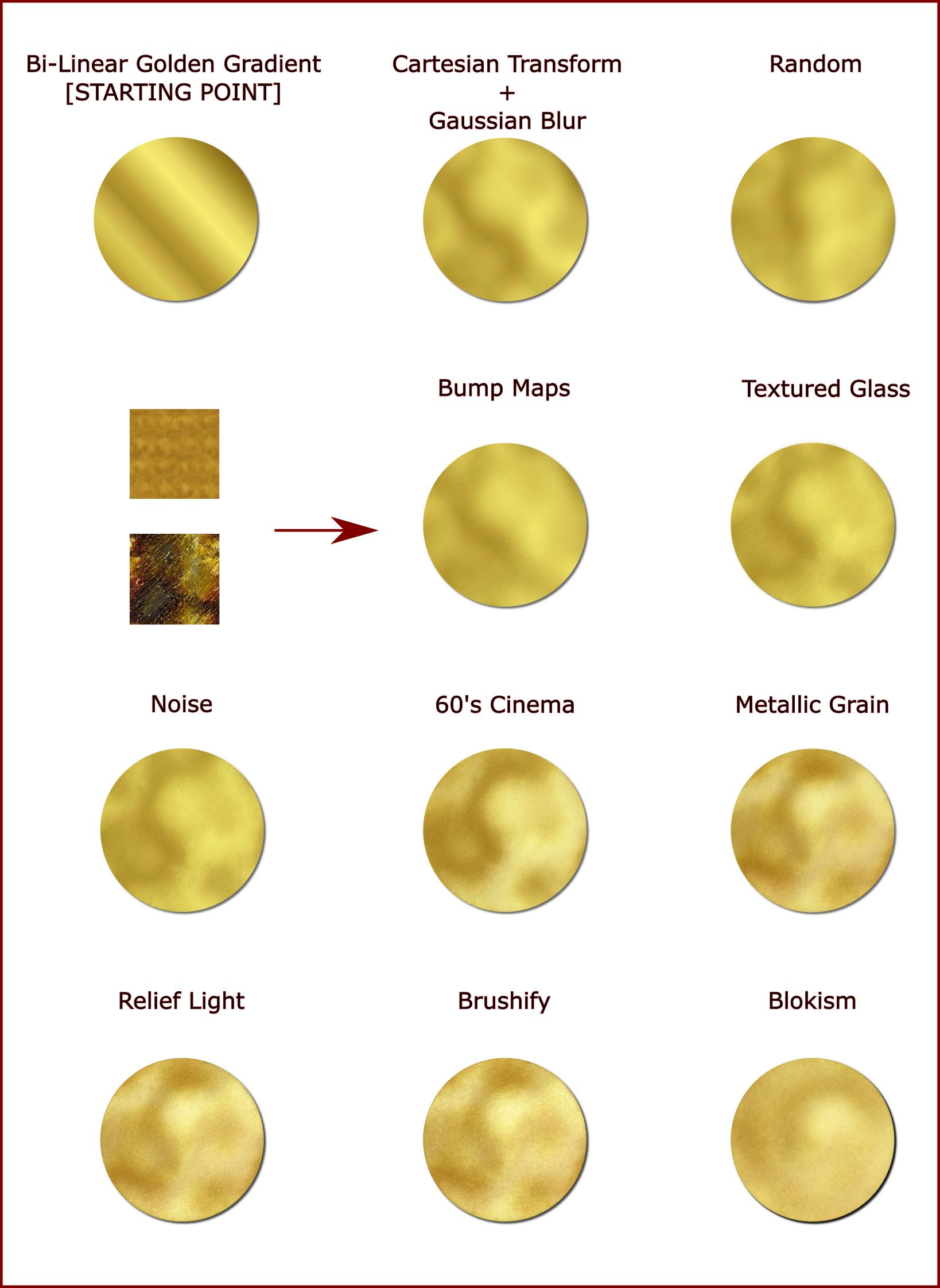 If you wish to control lighting options and optionally add realism by using environment maps (much the same way as bump maps), you can try Lighting Effects (Filters -> Light and Shadow -> Lighting Effects...). 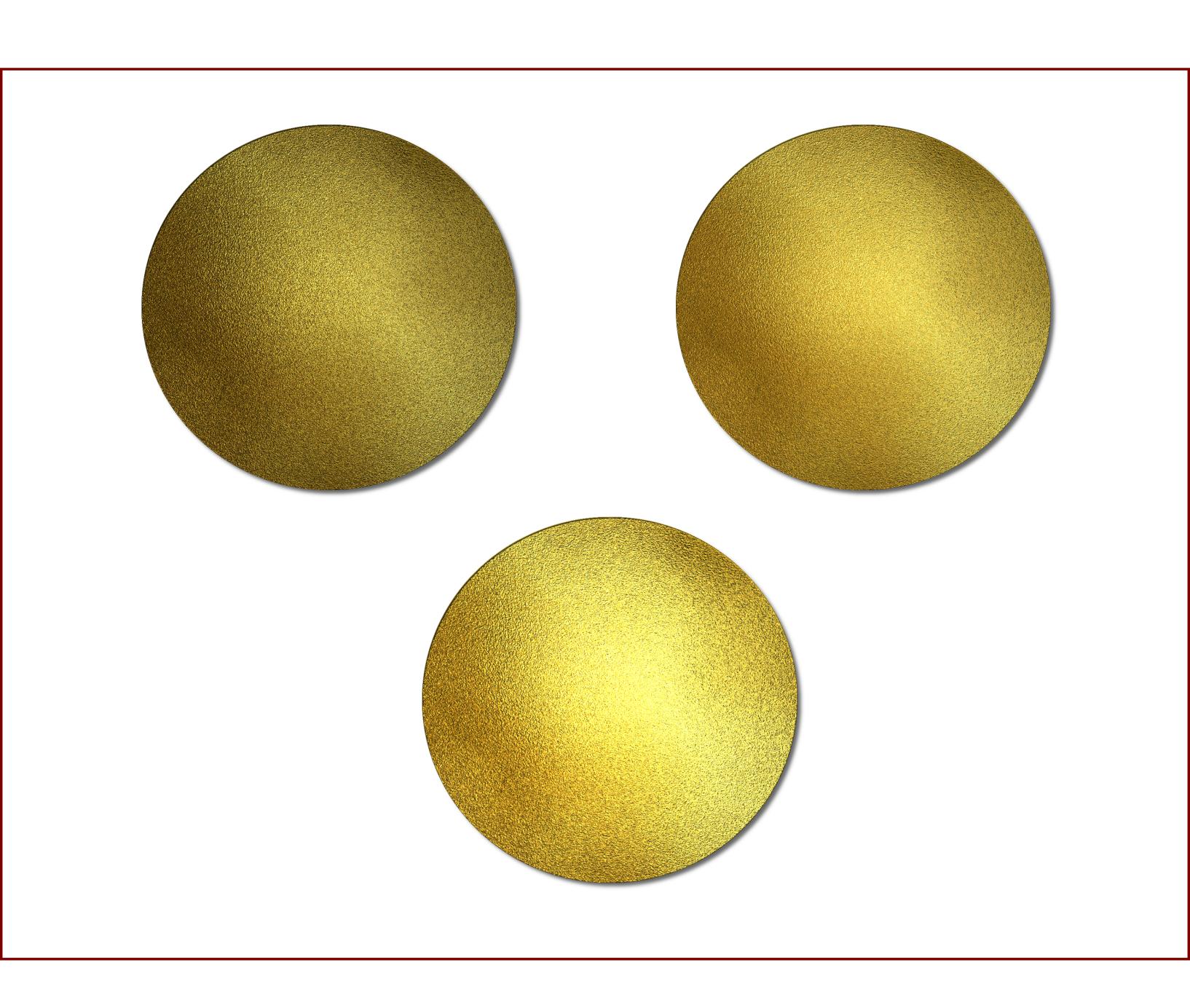 There seems to be plenty of Photoshop tutorials available so depending on how well you know your way around Gimp you could perhaps attempt to follow one of those tutorials and try to replicate the tasks in Gimp. One good Youtube tutorial is called "How To Create a Realistic Coin In Photoshop". It introduces some basic concepts and methods that are Application independent and achievable also in Gimp or most any other image editor.

Finally, if you wish to learn more about surface texturing and photorealistic material creation, it might be a good idea to search for Blender "Hard Surface Texturing" tutorials even if you are not a Blender user. Many Blender artists create their weathered hard surface texturing brushes, bump maps, scratch brushes etc. in Gimp.

More contrast - let the highlights blitz, no dead (=perfectly flat) piece of metal, nearly all details as own embossed layers for control. The flat areas are brushed that gives to them a complex highlight-shade variation. Without it it's only plastic.

Before you start, you need a plausible reference. Keep it onscreen. It's awfully easy to get lost without it.

Turning the texts and sculpted patterns to gold is well documented, but the plain metal is somehow much more difficult, as you have seen. GIMP's preset "Golden Gradient" has become a cliche' that makes it miserable. Some creative geometric mangling makes it nearly acceptable, but generally it's still too plastic.

Some virtual alchemy helps. A piece of grey metal can be processed to gold in the computer easily - assuming you have a plausible image of it. You need only to add the yellow color. That needs a yellow layer over the grey metal layer. Use a transparent blending mode. Blending mode "Color" is good, because it does not affect the brightness, if everything is kept around luminosity = 128.

The following example has a 50% grey shape and it's copy. The copy is filtered by Script-Fu > Effect > Chrome Image (it's in the extension pack): 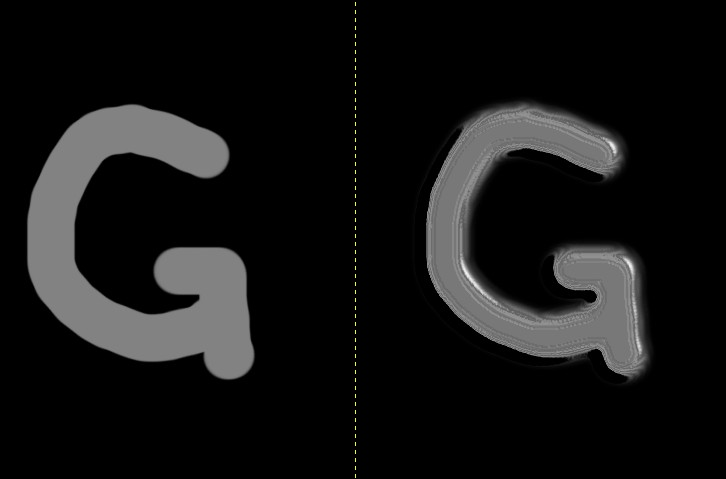 A flat yellow midshade color was copied from the (fake) reference and added to the topmost layer (bucket flood) to colorize the grey shapes; the blending mode = color. If your color happens to be highly saturated, then "Overlay" is a better blending mode.

Sript-Fu Chrome Image takes the chrome reflections from the neighbourhood. This effect can make shiny edges, but it can't create a natural flat metallic surface from emptiness. It needs some texture as basis.

A photo of real metal can be useful. A grey one is ok. Actually it should be desaturated to have the control over the color. Here's a snippet of a photo taken of a not so well treated aluminium plate: 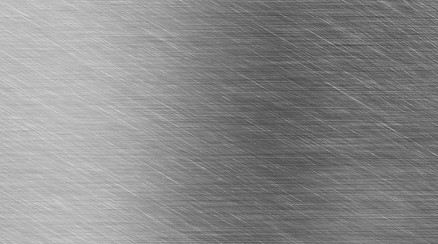 Really sandpapered. A little less grainy polish would be better. As colored it's not especially interesting, altough usable:

The metal plate can be enhanced by filtering. This makes it more usable as the basic surface or a texture for patterns. The following image consists 6 different filterings. The filterings often affects to general brightness, which is compensated by adjusting levels. 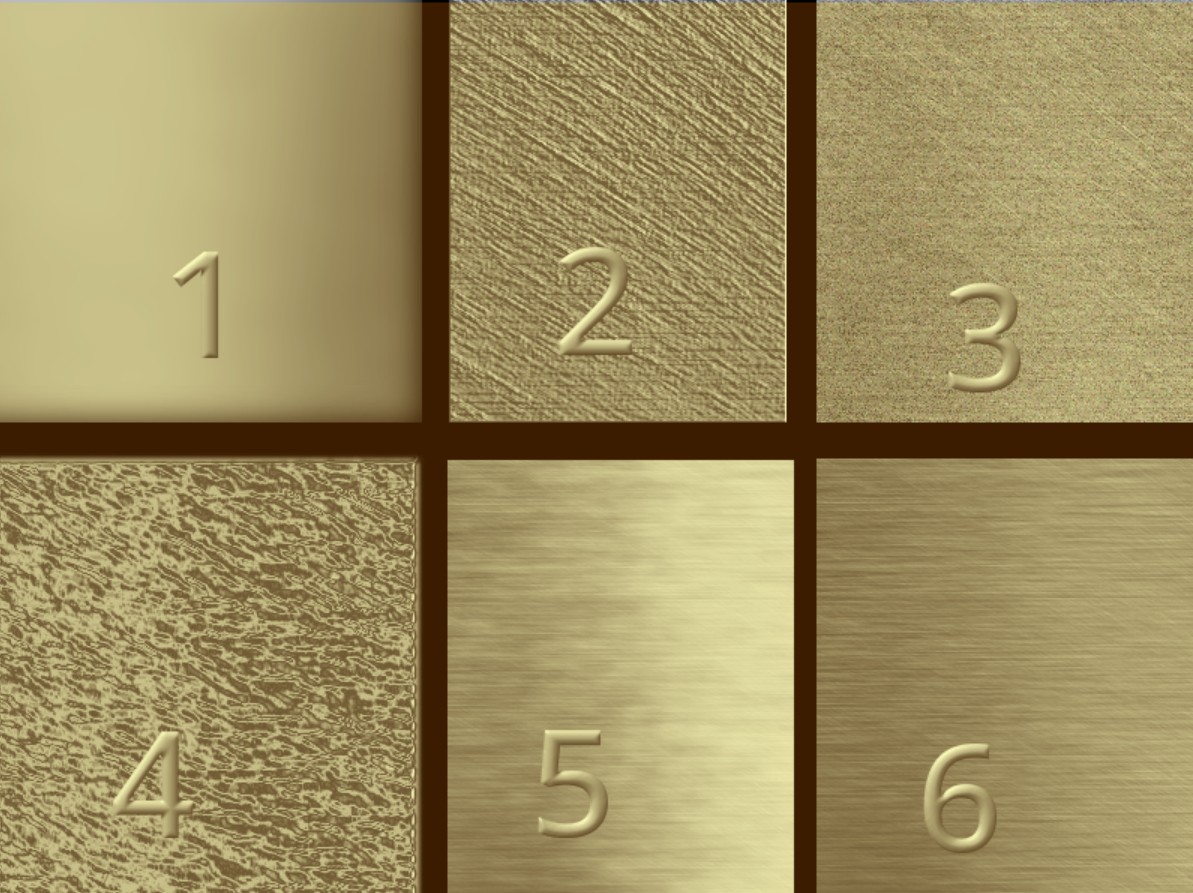 1 = Gaussian Blur (quite same as the usual gradient)

6 = no filtering, but taken the best piece of the plate

The numbers are 50% grey, added Bevel and adjusted levels for balancing highlights and shadows.

Here's the final test coin. It's a combination of methods 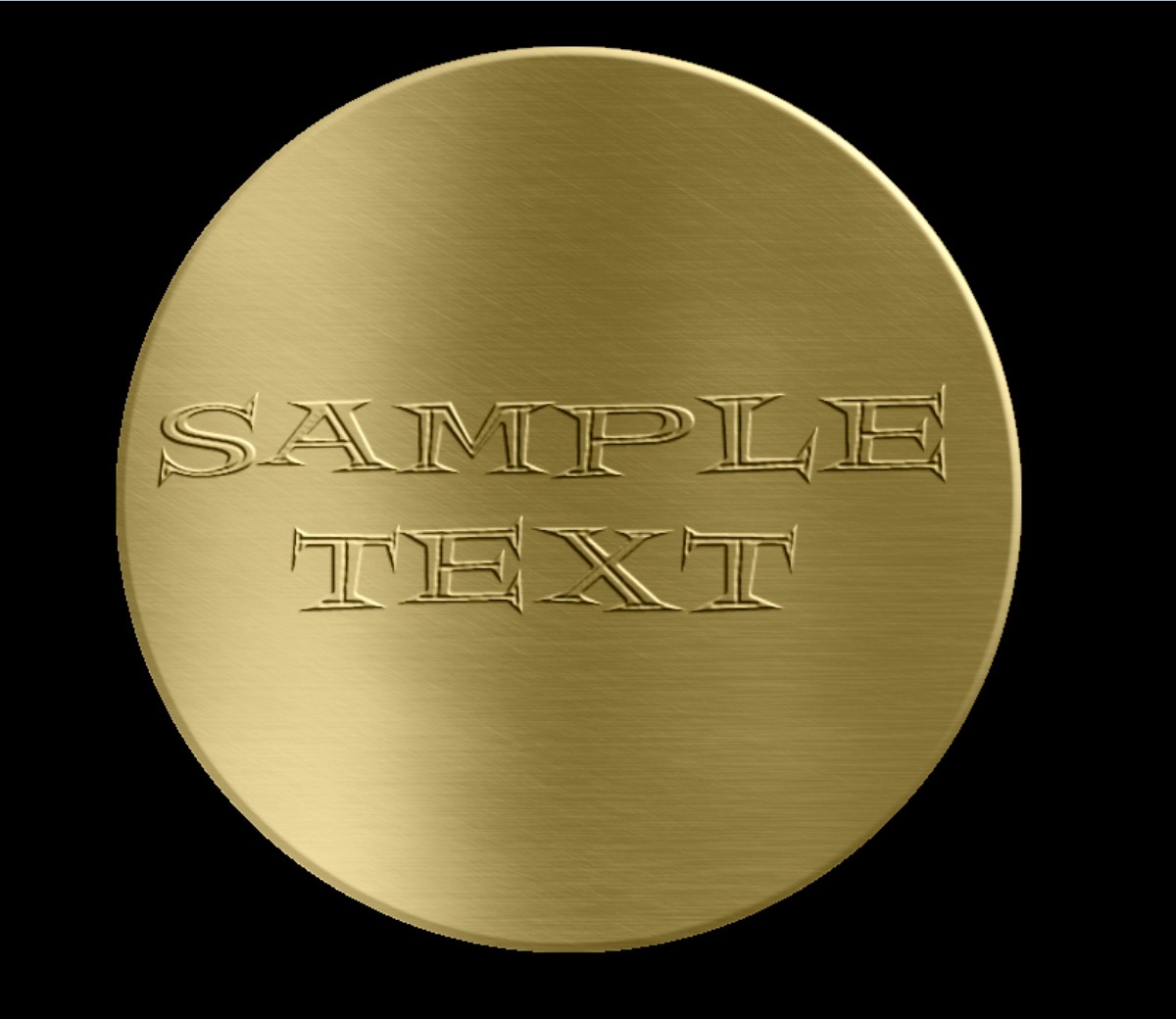 3
Gimp: Creating Transparent Backgrounds
3
GIMP - Flat image to round ball surface (sphere)
0
Gimp: making sunken relief lettering (gold) on textured surface
0
How do I map from a cylinder to a plane? (tree bark texture)
0
GIMP is not combining layers the way that I expected
0
Creating a realistic foil effect on black/white images in gimp or photoshop
2
What are some techniques for designing realistic-looking planets and moons?
0
S-shaped(ish) Bezier curve control points? (GIMP)
0
set a ONE pixel image's alpha value using gimp
2
How to replicate this vaporwave style image in GIMP?