Making a line drawing or vector image from photograph

I'm trying to create shooting target-style single-color images from digital pictures of animals. Once I've lifted the image from the background, what are ways I could turn it into a simple line drawing?

I would be satisfied with something that got me edges even if I had clean up within them.

I'm assuming you are using Photoshop. You didn't tag your question with that, or mention it, but since it's the most popular tool...

If the background is transparent:

You have a new Shape layer of the outline. You can then turn off or discard the previous layer. Then use the Path tools to clean up as needed.

If you want this in a vector application such as Illustrator:

If you've got access to Illustrator, the Live Trace / Image Trace tool is designed for that sort of thing.

It sometimes gets a bad reputation, because a lot of people use it badly to make tacky 10-second gimmicky pop-art style stuff with no care or balance - but just have care when using it and think about what the right level of detail is for your purposes (both too much and too little detail can look bad), and tidy up where necessary after it's done it's thing, and it'll be fine.

In CS6, open the window under Window > Image Trace. Select the photograph then adjust the options. In CS5 and earlier, the tool was cruder (but still good enough for simple outlines - here's a tutorial for the older live trace), and was found under Object > Live trace (might vary in some older versions).

It sounds like you want silhouettes. They're really easy with live trace - there's even a preset for them (this image of a photo of a strawberry being turned into a silhouette is taken from above link): 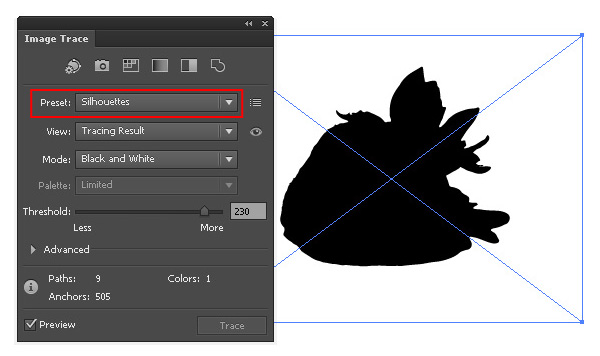 If you're using free / open source stuff, the equivalent in Inkscape is Path > Trace Bitmap. Here's a tutorial, I've never used this feature so can't say if it's any good but it looks legit.

I like this disclaimer from that Inkscape tutorial, which is just as true for Illustrator's tracer and any other automated filter that does anything like this:

Keep in mind that the Tracer's purpose is not to reproduce an exact duplicate of the original image; nor is it intended to produce a final product. No autotracer can do that. What it does is give you a set of curves which you can use as a resource for your drawing.