I'm trying to follow this tutorial (https://www.tutpad.com/tut/how-to-create-a-polygonal-background-in-adobe-illustrator) to create my own low poly background, except I can't seem to properly group the paths and use the direct selection tool to make the polygon irregular like shown in the tutorial. 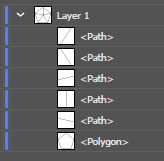 The tutorial says to create the lines using the pen tool from the corners of the polygon to its center. Then it says to group everything and you when use the direct selection tool, you can change the shape which makes it easier to manipulate the triangles. However, this doesn't work for me, and at this point I don't think it's possible. The lines share anchor points and I thought there would be a way to sorta tell illustrator to combine it with the polygon instead of having it as separate paths.

Can you even have those paths combined and be able to move a single anchor point which will essentially warp the rest of the shape?

EDIT: I couldn't figure out a better way to explain it in the title, so if this does get answered, it'd be helpful if you could suggest a better title.

Won't try to merge/combine the Anchors. I need 3 steps:

2nd, (Important!) Drag you mouse to select the polygon & line's anchors together.

3rd, Use direction keys on Keyboard, or drag and move with Selection Tool (Shortcuts 'V').

4
I can't see guide lines on selected paths anymore
1
Using Illustrator CS6 to create shape out of multiple paths
0
Is there a way to adjust the size of the selected anchor points?
2
How do I combine paths to make a clipping mask in Illustrator?
0
Illustrator and direct selection tool. Help!
2
Problem aligning overlapping corner points in Illustrator
0
Not able to replicate the path as shown in tutorials
6
Paths to Polygon SVG primitive
1
Puppet warping a polygon in Illustrator with internal line-art
1
Anchor Point Moving Too Far After Direct Selection in Illustrator