Default style of arrows in Inkspace

Is there a way to set default settings of the arrow marker in Inkspace with a given color and style? Currently I copy/paste the line shown below into documents to retain the style.

The default style when drawing with the bezier curve tool can be set under Edit > Preferences. 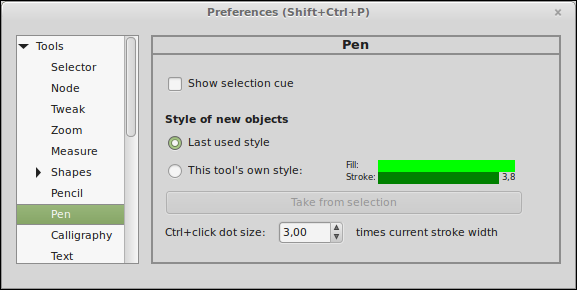 Default setting is Last used style. This can be used to include markers in the default style in your current session:

Once you close and reopen your document or create a new document, the markes won't be in the default style anymore.

This Tool's Own Style (may work with some tricks)

Unfortunately the following approach does not work for markers:

This changes the default stroke width, color, and so on, but not the markers. The reason for this is probably technical. In SVG, markers are objects which must be embeded in the SVG file. Example:

Not the answer you're looking for? Browse other questions tagged inkscape stroke style or ask your own question.

25
Set the colour of arrows in inkscape
3
Inkscape; transfer gradient names between documents
3
InDesign: Resetting character style after end of paragraph
2
3D pill shape in inkspace
4
Fix vertical spacing or reset default text style
1
Inkscape - how to draw a line with an arrow (as marker) in the middle with correct orientation
9
Inkscape: A proper way to align arrows heads with a given curve
1
Adjusting a looped arrow SVG file to match the style with other arrows