How to be sure InDesign imported the whole text from a doc file?

I revised my text yesterday in Word and I really don't wanna read it all again in InDesign. My first option was to to a word count. I did, but it shows 28.112 words while MS Word shows 28.208. Why this difference?

MS Word's word count never matches anything else here. Some apps count spaces, punctuation, special characters, etc., some don't. I've never seen a single file where Word's word count matched the count in any other application. There is almost always a ± 100-200 word difference. (In fact, I've been on the phone with clients looking at the same Word fie they sent me moments before and the word count on my system doesn't even match the word count they have on their system... for the exact same Word file.)

If your text is linked then you can be assured it updated entirely.

Essentially, if the text updated at all, it'll be complete. (See caveat below)

By default altering a Word file does not change an InDesign file. You have to specifically tell InDesign to link to text files if you want some sort of "auto-update". It won't do it out of the box. If the preference is not checked it takes manual interaction to update text. 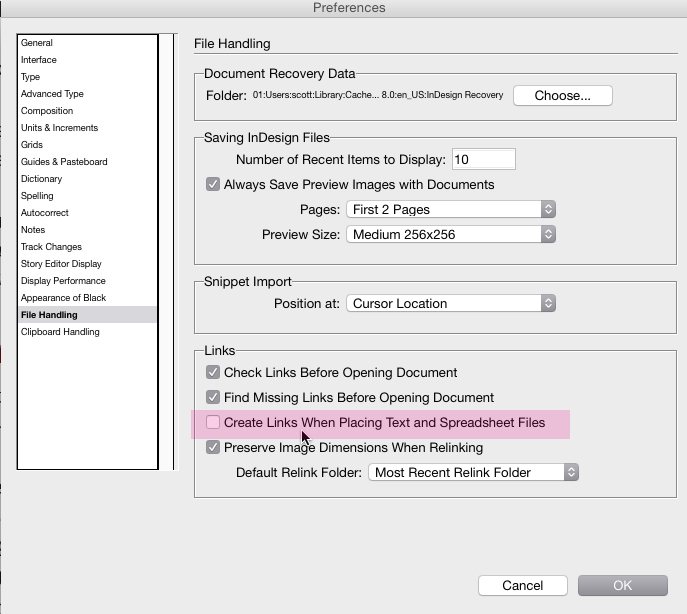 That option is unchecked by default. And with it unchecked InDesign imports the text, and then embeds it... removing any reference to the original text file. So it's part of the InDesign file itself and completely independent from any external text file.

The important caveat here is construction of the Word file itself.

If the Word file contains "boxes" of text within the file, those "boxes" may not be imported as expect or be in the position they are expected. Word files best import as straight text files. (bold, italics, etc. are fine though).. no inter-file "layouts" within Word. When a Word file contains "layouts" you never know what you'll get. Most often those "call out" boxes end up breaking paragraphs mid-stream, or actually have text woven in and out of surrounding paragraphs - out of readable order - or appear at the end of all the other text. And sometimes these "boxes" can be completely ignored by the import. So, some of it depends on Word file construction.