I have a online store and have made white backgrounds before, but I am struggling right now with these intricate items like these. I have tried invert, levels, layers and selective colour, but the image doesn't turn out well. Being so intricate as some are the selection tool often grabs bits of the image too which makes it painful to sit and persist with. Any tips ? What am I doing wrong ?.. 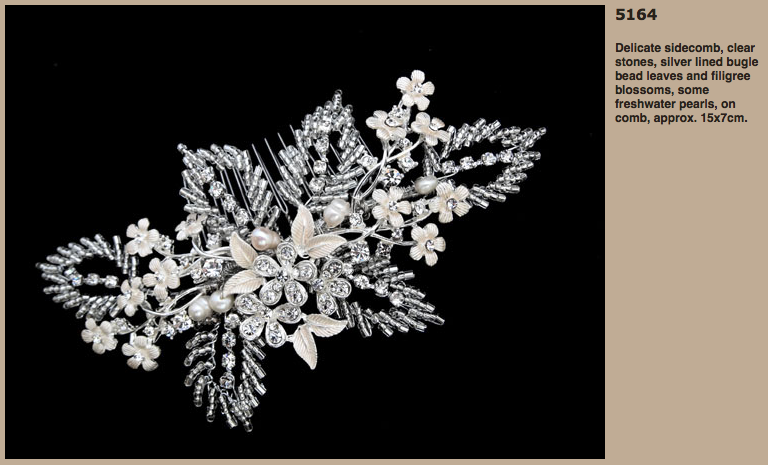 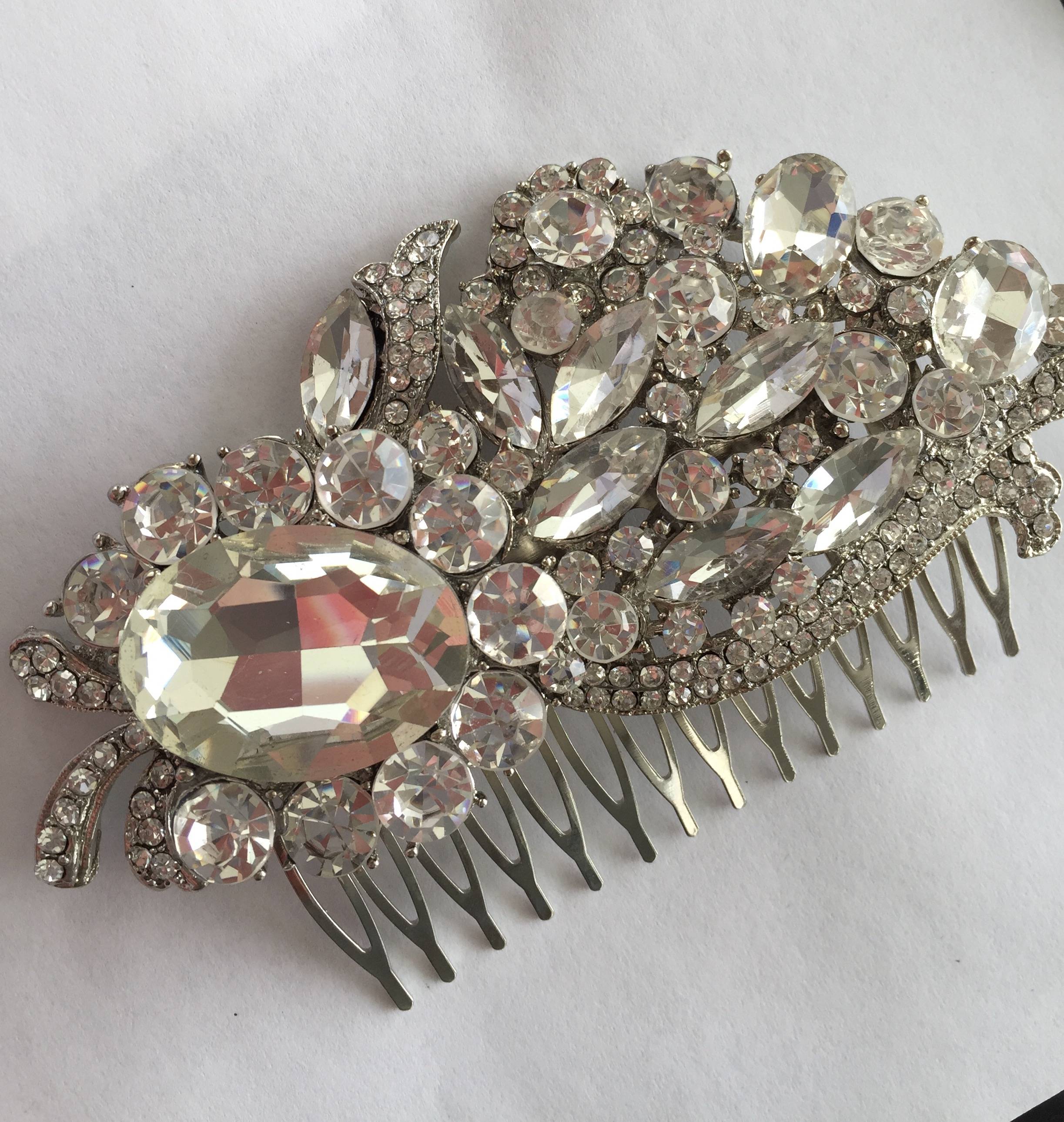 Try not to use textured paper.

(I am sorry because I am not sure if all brands are available where you live, but google them and look for an alternative)

Beware that as you now have a reflective surface the white is now given by a white wall behind it.

You will have a double reflection, but that is something that works.

I assume you can't take proper photos for some reason. You have to use those photos that you get from the suppliers and all of them aren't the highest quality.

Whitening the black one:

This is nearly no-hope case. The photo has low resolution and very strong JPG artifacts.Those artifacts are nearly invisible on the black, but they are the there. Worse: There exist strong reflections of the black background. The black reflections seem unnatural - even dirty - if the background is white.

Let's forget the unnatural reflections and check, what we get.

If we try to cut the black background off, making the selection is nearly impossible as you have seen - at least, if we try to use some easy method. JPG artifacts and the black reflection very effectively render the magic wand and selecting a color range useless. Also using the photo itself as the clipping mask (= the first idea for a seasoned PS user) is as fruitless. All those leave dark jagged edge + stray pixels or chip away parts of the jewel or both. 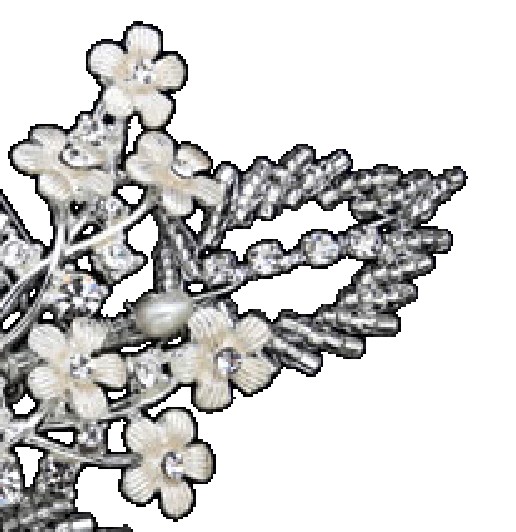 Drawing a clipping path should be immune against artifacts and reflections, but even that is very difficult. You simply cannot decide the position of the edge accurately enough. (Clipping path this complex takes a long time to draw)

One idea to get rid of black remnants is to turn them white. I call it negative solarization. Hopefully nobody thinks bad for the misusing of an old chemical photolab term: 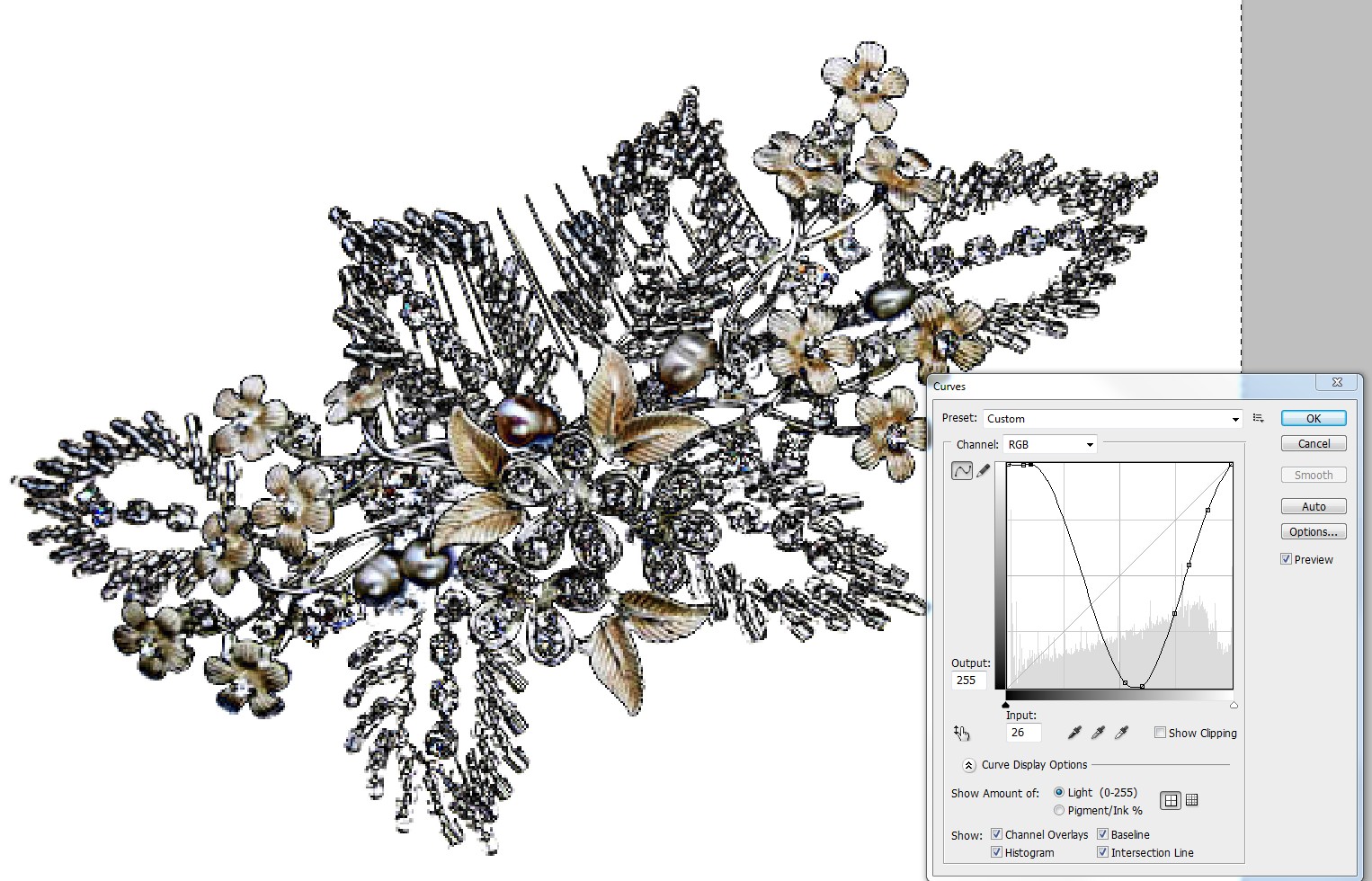 It's better, but there's some strong fake colors. They can be cured partially by reducing the saturation. The colorization could be less harmful if the photo was converted to LAB color mode and only the luminosity channel was manipulated.

Would the result be better, if we had higher resolution and less JPG artifacts? All defects seem to be about 1 - 2 pixel wide, so if the pixel size was smaller... it's easy to think this. And it's easy to try it, too, if one has a proper image enlargener.

We can enlargen the pixel dimensions by On1 Perfect Resize which smartly keeps all small details small. It also can reduce the JPG artifacts very effectively. If we enlargen the original photo 300%, all those things that seem 1...2 px wide defects in the final image should have much smaller relative size, so small that they even could be chipped away without removing too much the jewel. Sounds incredible and mathematically contradictory, but it works: 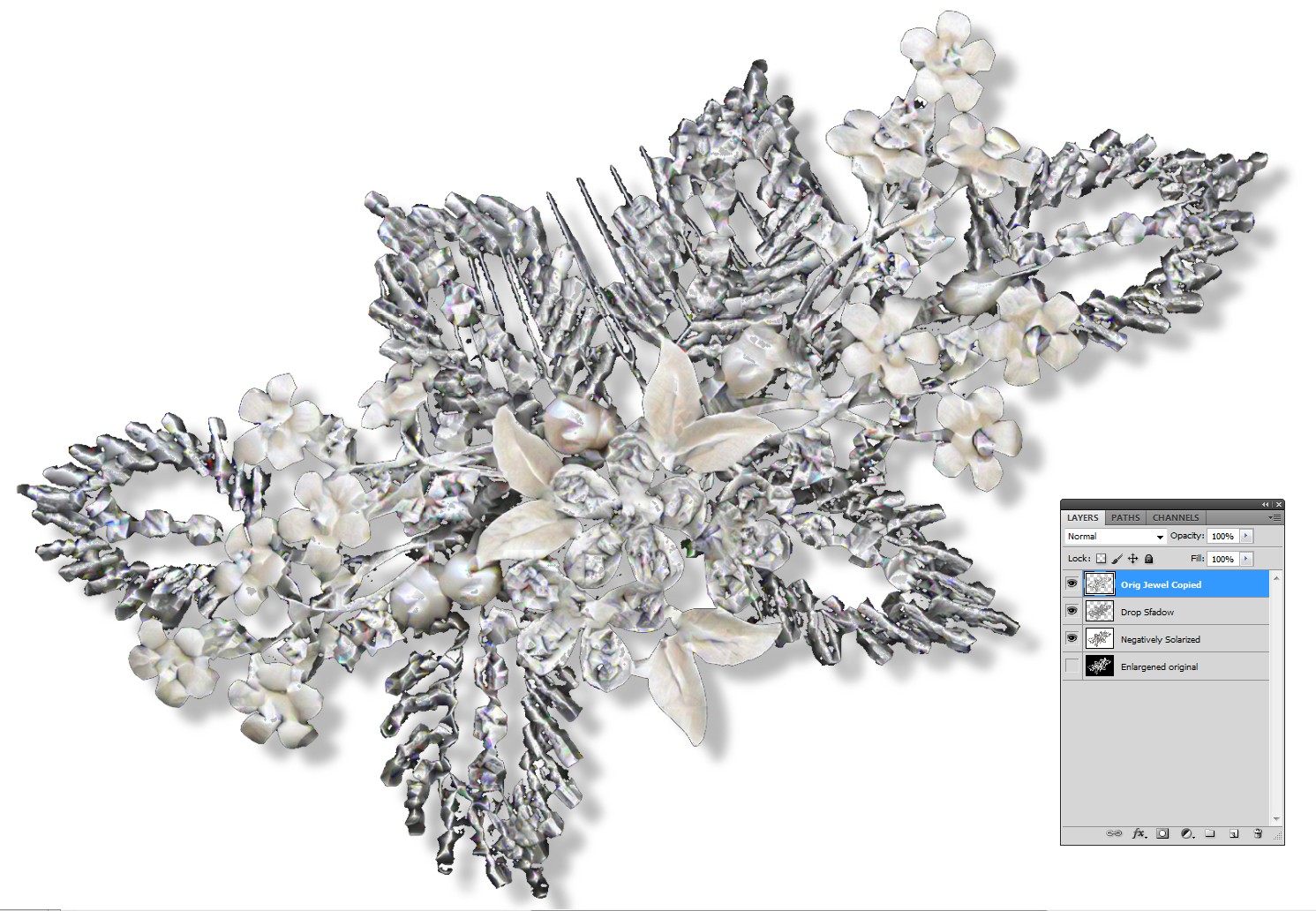 Here the black background of the 300% enlargened image is turned to white by using the same Negative Solarization as above (= bend the Curve to V). Now the border of the jewel is solid enough for using the magic wand and copying the original jewel onto the solarized one to hide the strong fake colors.

No attempts are done to chip away the slight black edge. A drop shadow is added.

This photo is good enough for drawing a clipping path. Tedious work, but possible. It really needs some practicing to develop a profitable speed and accuracy.

One can easily add any background and shadow after the paper is removed: 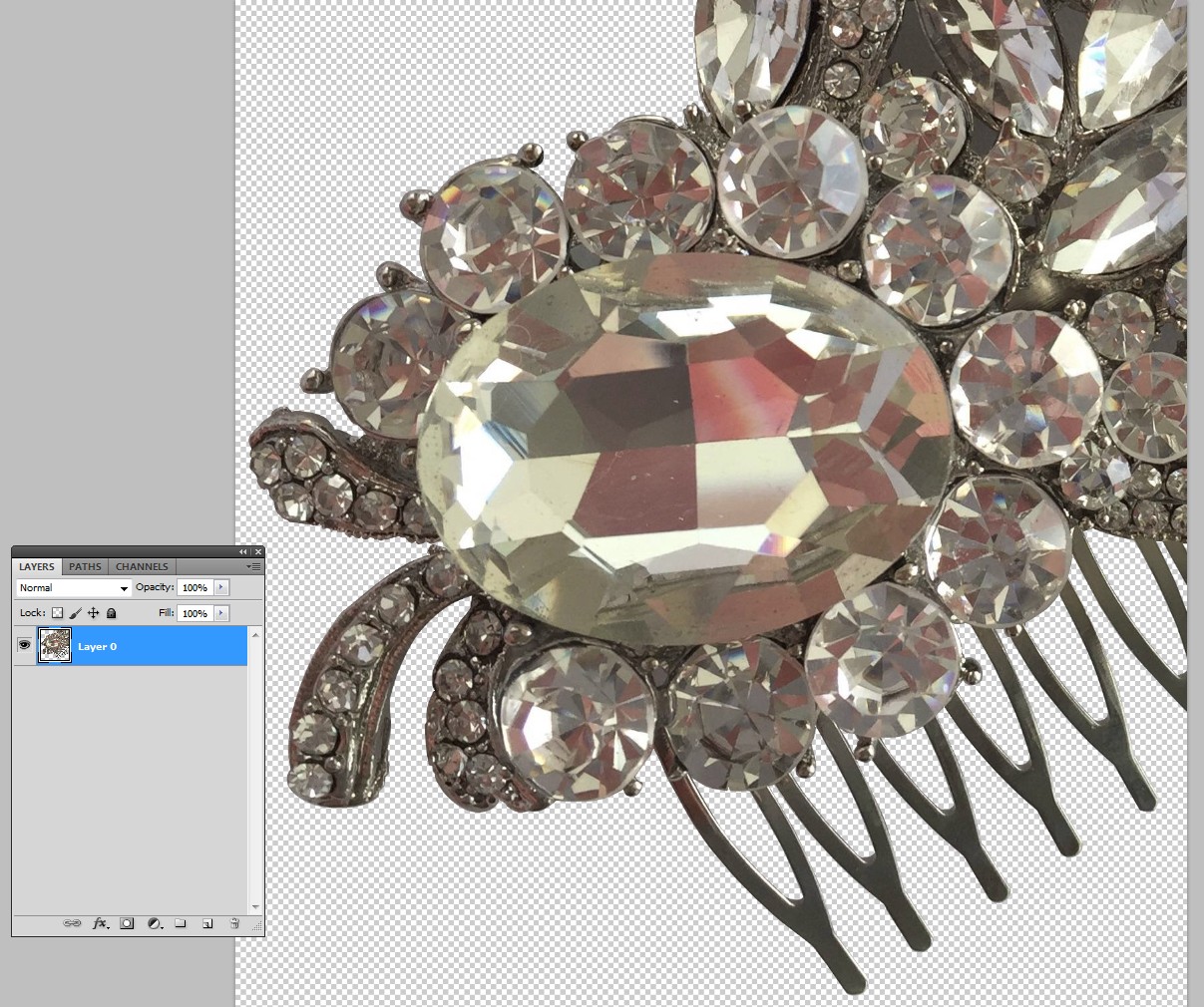 Clipping paths needs much work. Better to use shotcuts and prepare to them when taking the photos, if possible. There is already one very good expressed in other answer: A background light to get a silhouette which can be used as the mask.

Not the answer you're looking for? Browse other questions tagged stock-images or ask your own question.

2
Removing the background from product photos