What are step by step to rotate, in all possible ways, a vector around its axis (vector direction) to have a three-dimensional effect? For example if I have the vector -F of the figure (b) and I should draw it with AI on xy plane what should I do? 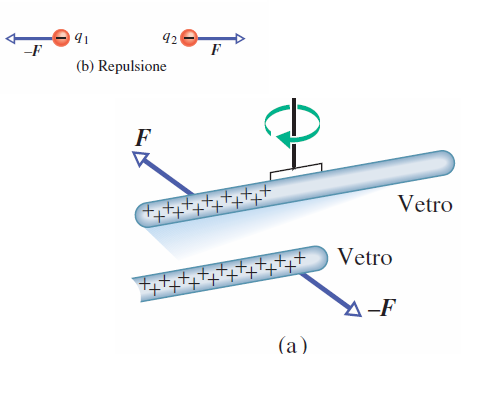 adobe-illustrator vector
Share
Improve this question
asked May 17, 2017 at 7:58

Keep in mind that data inside illustrator is allways flat. So even if you rotate stuff it only appears like rotating a plane.

Effect → 3D → rotate is quite good for doing rotations (just not necessarily easy due to the way Euler angle rotations work and the chosen rotation order*). Its just that the GUI of the effect is pretty useless for precision work. The other option is to use SSR (Scale Skew Rotate) methods to put the object in position you like. This is actually a circumvention scheme for the fact that you can not directly set the transformation matrix via the gui. But alas SSR does not allow for perspective to work out.

You can always build your own rotations. But explaining all methods would be a bit time consuming as you can easily have a multi year university course one the subject. 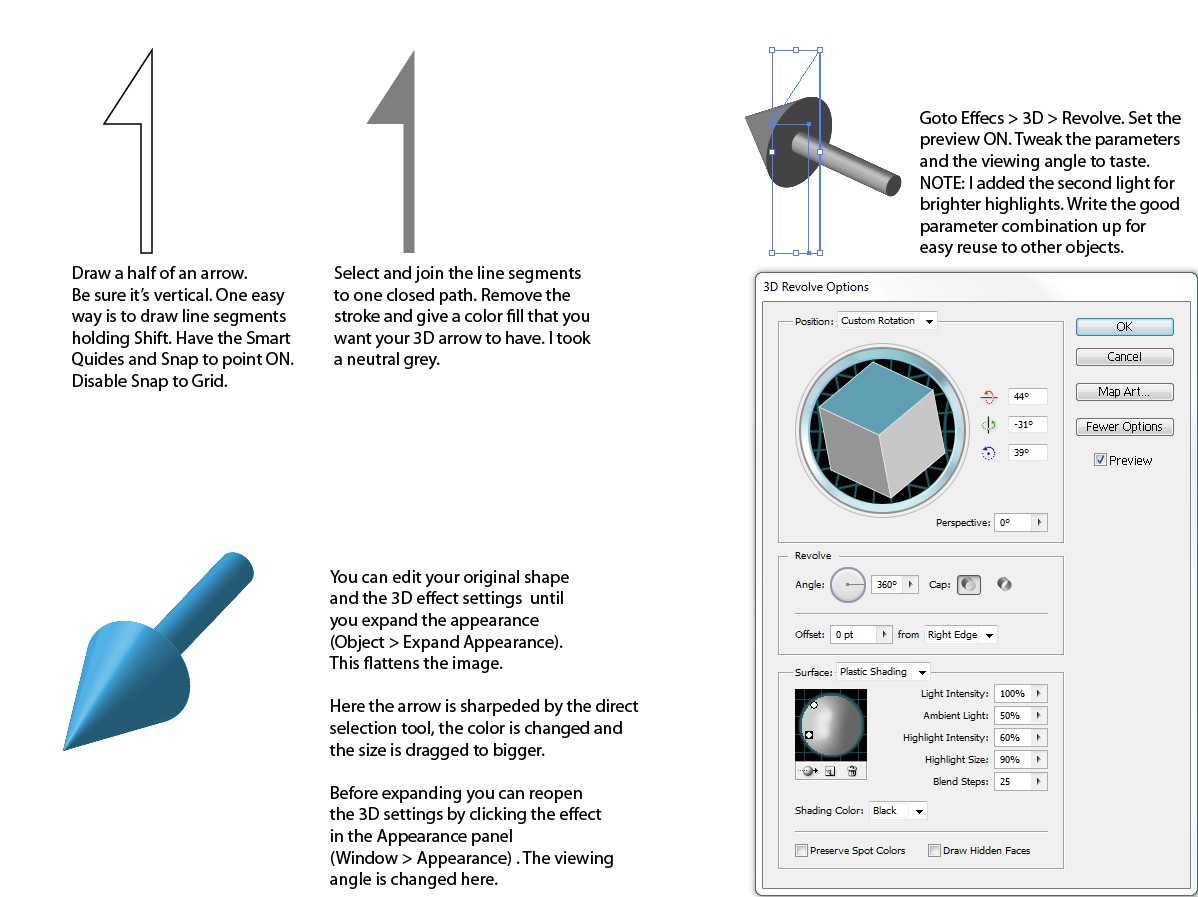 The same can be used also for many other ojects than the vectors. Explore also

Combining several 3D objects into the same illustration is no problem if you have consistent light and viewing angle settings for all. The combination work is normal composing of plane objects.

Option 2. Draw them in 2D as 3D shapes with no shading, only the lines and curves. The smart quides make everything easy to fit.

The following cartoon assumes that no fill color is needed for the arrowheads. If the fill is a must, you should draw the arrowhead in 1 as a triangle. The ellipse, when filled, covers one side of the triangle. 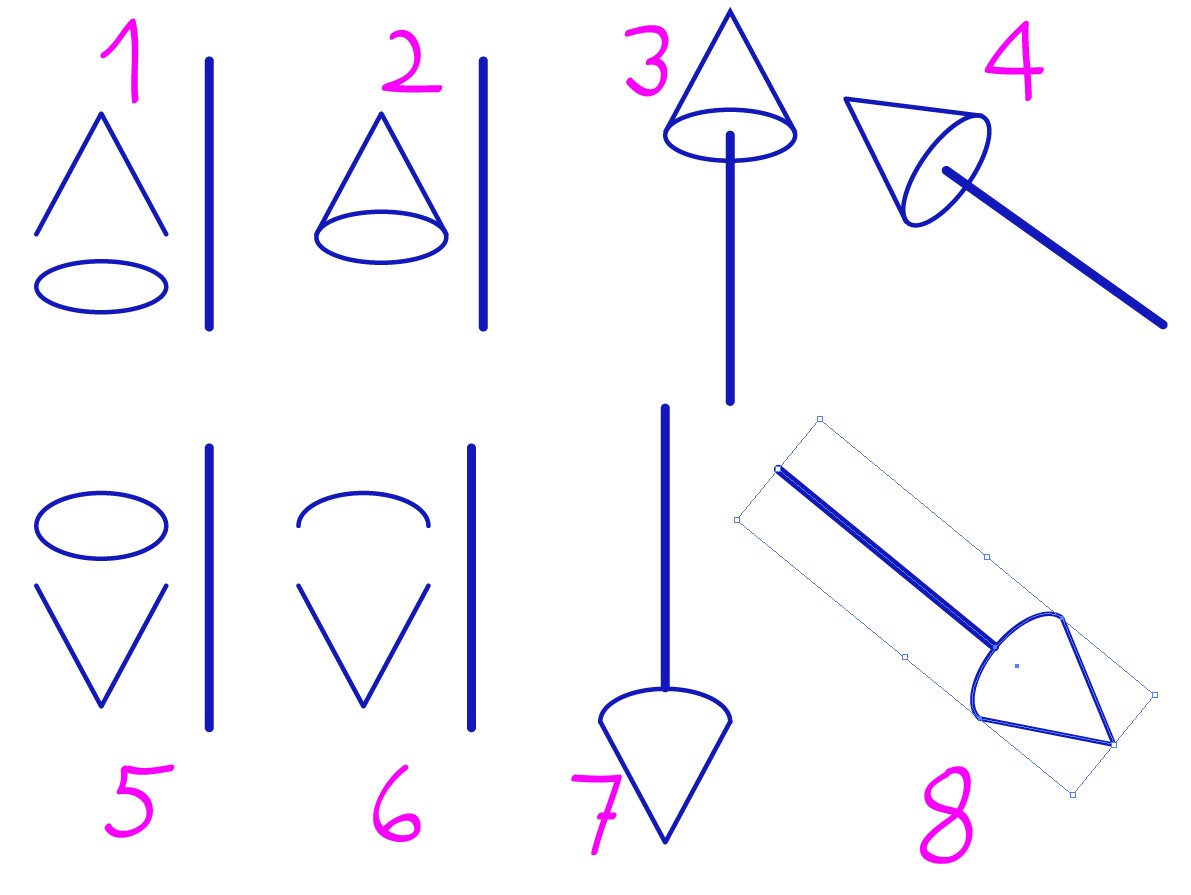 1 and 5: Draw an ellipse, arrowhead and the bodyline of the vector. Have the smart quides and the snapping to point ON. No snap to grid! Have rounded stroke ends for fitting with no gaps

2: drag the ellipse and the arrowhead together. After that move the arrowhead a little upwards by ticking the arrow key. That makes the fitting better due the thickness of the stroke.

3: move the vector bodyline to its place and stretch to good length

4 and 8: Rotate to the wanted angle

6: take the direct selection tool. Click onto the lower half of the ellipse and press DEL

7: Drag the parts to their places. They should snap perfectly. Join the half ellipse and the arrowhead (Ctrl+J) to a closed shape if you need a fill color.

There's allways a place for some rational thinking. The simplest open-back arrowheads are well recognizable. If there are also some other glues for the directions of the vectors, the flashy 3D appearance adds no expressive power nor mathematical depth. Worse, if you illustrate your own texts, somebody can think that you have too much time for this job.

If you ignore thislike talks and really start using 3d-like vectors, have a collection sheet that has copies of all your vectors, the revolved ones as editable (=not expanded) and those drawn in 2D as groups to keep the parts together.

14
Which software renders a planar projection of a 3D object as a vector graphic?
1
Photoshop Pen Tool: draw lines in a vector mask
2
How to rotate a shape around a custom center point using the transformation effect in the appearance panel in Illustrator
2
Rotate object in Illustrator while keeping its horizontal alignment
1
Scale and rotate tool vs. selection tool in Adobe Illustrator
2
Why is my vector files printing fuzzy?
1
Selecting same shapes in vector files
2
How to draw a contrast outline around vector objects in Inkscape
3
Illustrator: Rotate a group of paths randomly and individually about the groups center
0
How would I create lines that rotate with increasing distance in Illustrator?