Combine multiple spray clones into one single object in Inkscape

I am doing something quite basic, "spreading" (aka cloning) a circle shape multiple times with the spray tool in Inkscape.

My problem is that I created quite a few objects (~200) and I'm experiencing notorious lags.

I am trying to merge or combine the objects in such a way that they become only one object/path that can be rendered inexpensively. I could then copy and paste this "pattern" several times without lagging issues. I am not concerned about breaking the original link between the object and the source from where it's cloned.

One idea I'm exploring is to save the group as a .png and import the .png as an image later. I was expecting there was a cleaner way to conserve the pattern in .svg format within the same document.

When you use the Spray tool in Inkscape, it doesn't generate clones by default, merely copies. I think that may be your problem.

Clones are a completely different thing from a copy in Inkscape. A clone is like a symbol - it's paths are defined only once in the SVG code, in essence it's a single object. When you spray it, you spray instances of the clone. However, if you spray copies (not clones), each path's code is repeated again and again in the SVG. If the copied graphic is complex, the more you copy the more paths are generated in the SVG. You could end up with thousands of paths, which will result in a slow down in rendering.

Anyhoo, here's how you can spray actual clones: 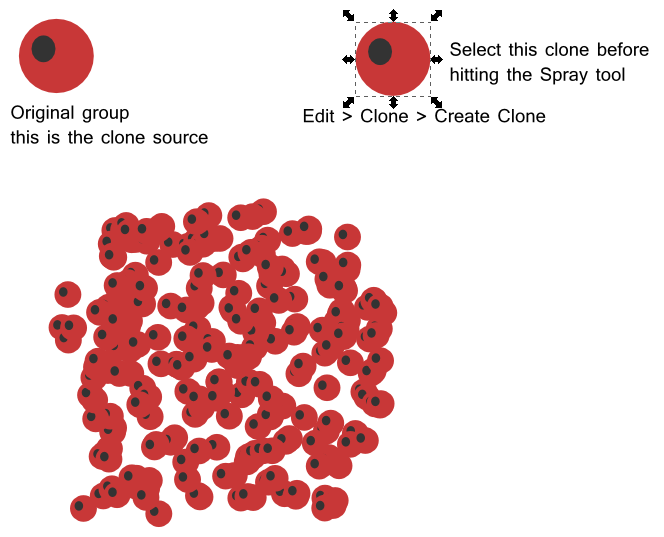 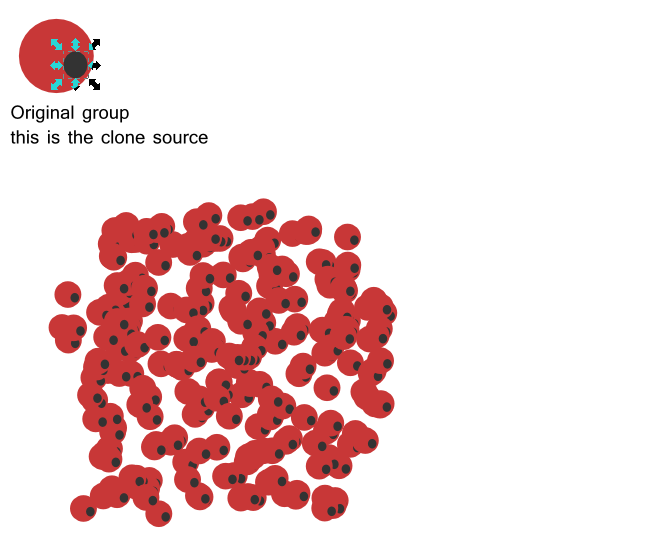 Select the objects you want to combine (the cloned circles) and do Object -> Group on the menu (Ctrl + G, on Windows). After the grouping operation is complete you can save the file as an svg and freely move and copy the unified object.

If all you have in your svg are the cloned circles, use Edit -> Select All (Ctrl + A, on Windows) to select the circles.

Depending on the number of clones and your available horsepower it may take a few seconds for Inkscape to process. This next step only works on path objects so skipping the first two steps won't yield a result.

This works like grouping object, in that you can drag them around the screen, resize, rotate etc but with the added bonus that combining multiple paths into one path object will allow you to get around the 2 object limit the pathing tools have.

With the above point in mind, once you've combined the paths:

The Path > Intersection method differs from using Path > Combine because you can't reverse it without using undo, whereas with Combine you can use Path > Break Apart to retrieve your original objects.

3
Separating one element of an Svg file into multiple elements with Inkscape
1
Why won't a certain object combine into another in Inkscape?
3
Inkscape replace original change all clones
4
How to join multiple path objects into a combined path object in inkscape?
2
Can not change tiled clones in Inkscape
0
Merge different paths into one - inkscape
4
inkscape - combine svg elements into combined path
0
Inkscape tiled clones based on px
1
InkScape to convert multiple paths into one single path
4
Inkscape: How to bend object with more than one color into a circle precisely?