I want to make gold lettering as sunken relief on a surface with texture. So my challenge is two-fold: make the text sunken relief and make sure the texture it's placed on is not lost. For the sunken relief I've tried:

I don't even know where to begin preserving the texture of the lower layer.

You run after the impossible. If one can see the bottom of your sunken relief, he very likely will not see it sunken, but as a protrusion (=raised ). This is discussed here.

Your problem is not caused by using fake 3D methods, It does not at all help to have a proper 3D model. The scene is ambiquous and for some reason our brain select the unwanted version. Some people see both alternatives as easily. The scene alternates raised-sunken-raised... and the watcher get a headache.

As a short proof here is a proper 3D extrusion of word "Engraved". It's straight through the plate: 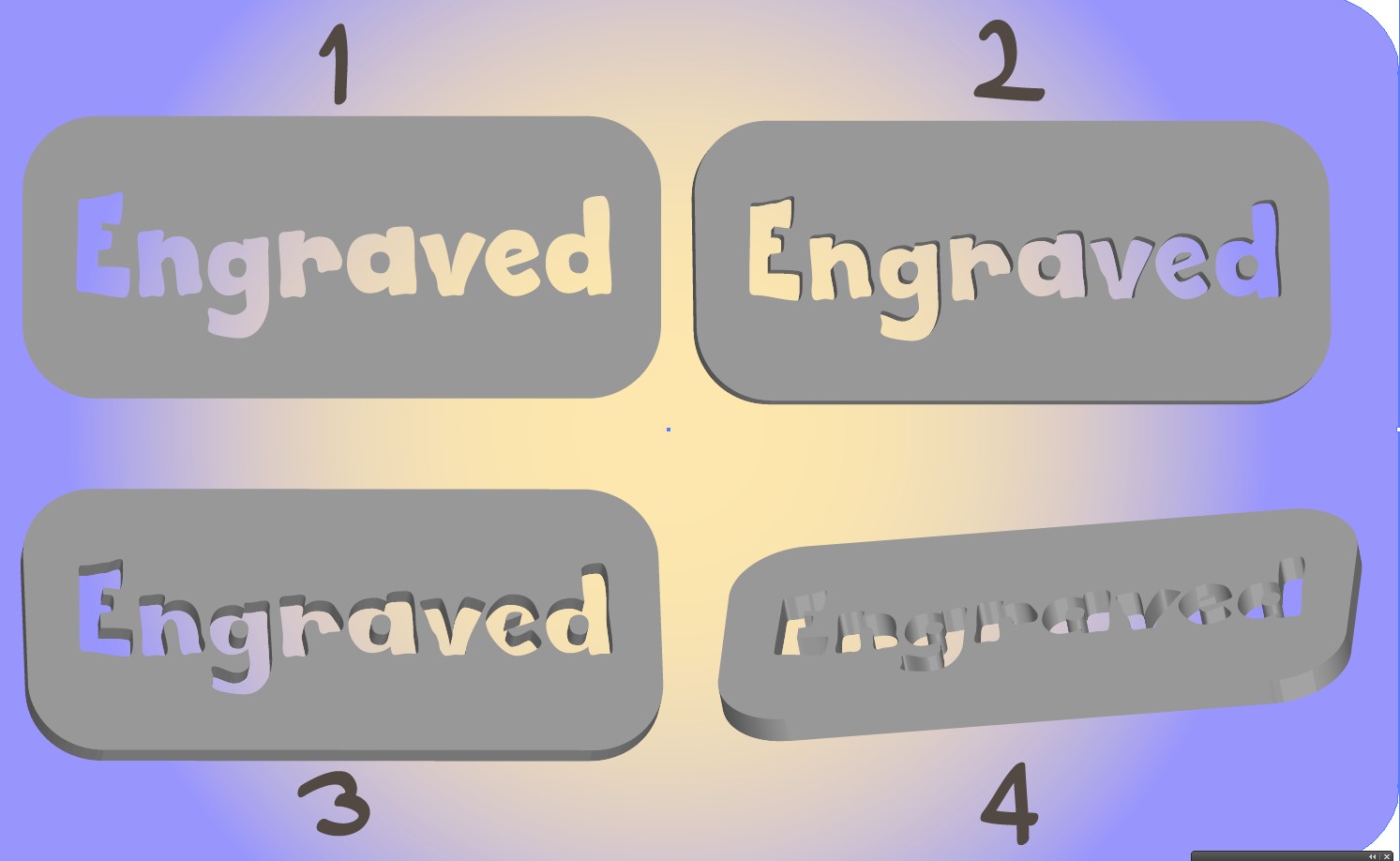 1: Straight onto face; no 3D appearance at all

4: Even more tilted unstable appearance, looks out as very bizarre protrusion, but can easily be seen as holes, too.

There are some ways to remove the ambiquity:

See an example; here the sunken part is still without texture: 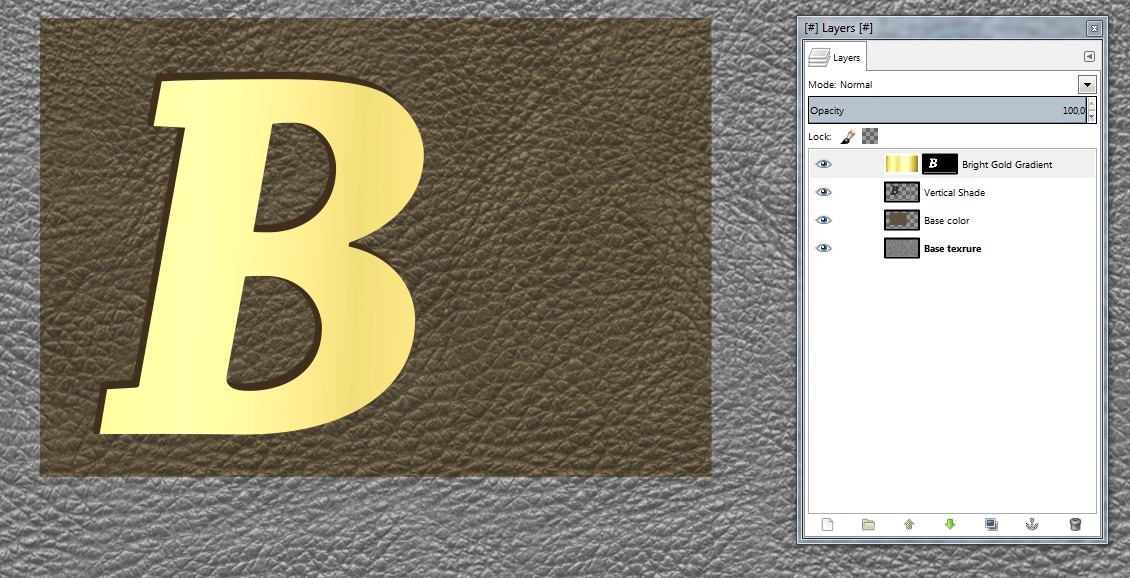 How it was made: The bottom layer is the base texture. It was desaturated to grey and adjusted to 50 % average brightness (Colour > Curves)

Just above the texture is the coloring layer for the texture. It's plain brown this time. The layer has the blending mode = Hard light. Only a little rectangle is colored to show the texture in grey. NOTE: You need the grey texture later. Do not color it destructively!

The text was written at first as black. Be sure to have a spare copy of the original text layer in the bottom (not shown here)

Make one copy of the text layer. We transform it to gold. In the layers panel click the text copy layer. By a right click

Select the text bitmap icon in layers panel. Add a color to the layer. You can paint or add a gradient. I prepared a gentle gold imitating gradient for this. Gimp also has by default an useful multistop gold gradient. I see it as too dark for redable texts. If you use it, adjust the color afterwards to taste. EDIT: the lightened version is seen here.

Just under the golden text layer add a copy og the text. Move the layer content to be a little visible above the golden text. It's your shading for the vertical surfaces. Not complete, but we fix it in the ending of this story. Select at first a proper color for the shading. It should be like the texture color, but darker.

Now we add the texture to the gold. At first we use exacly the same texture as our base texture. Thislike: 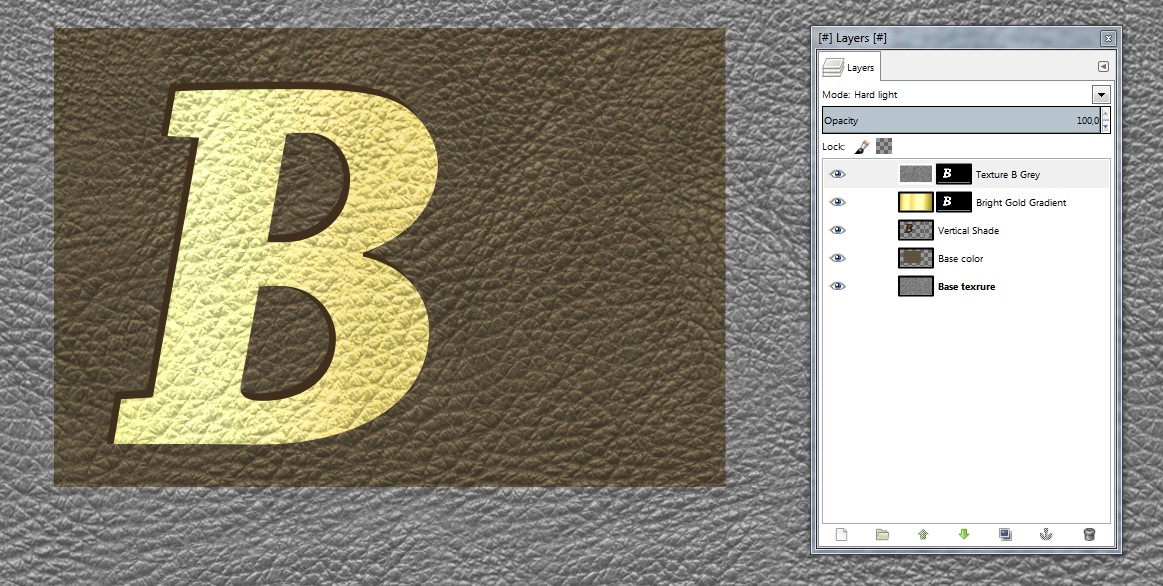 It's a duplicate of the golden text layer, but a piece of grey texture is copied and pasted to the layer. The blending mode is hard light. The result is not especially glossy, but it can be made a little more shiny or much more dull by adjusting the color curve: 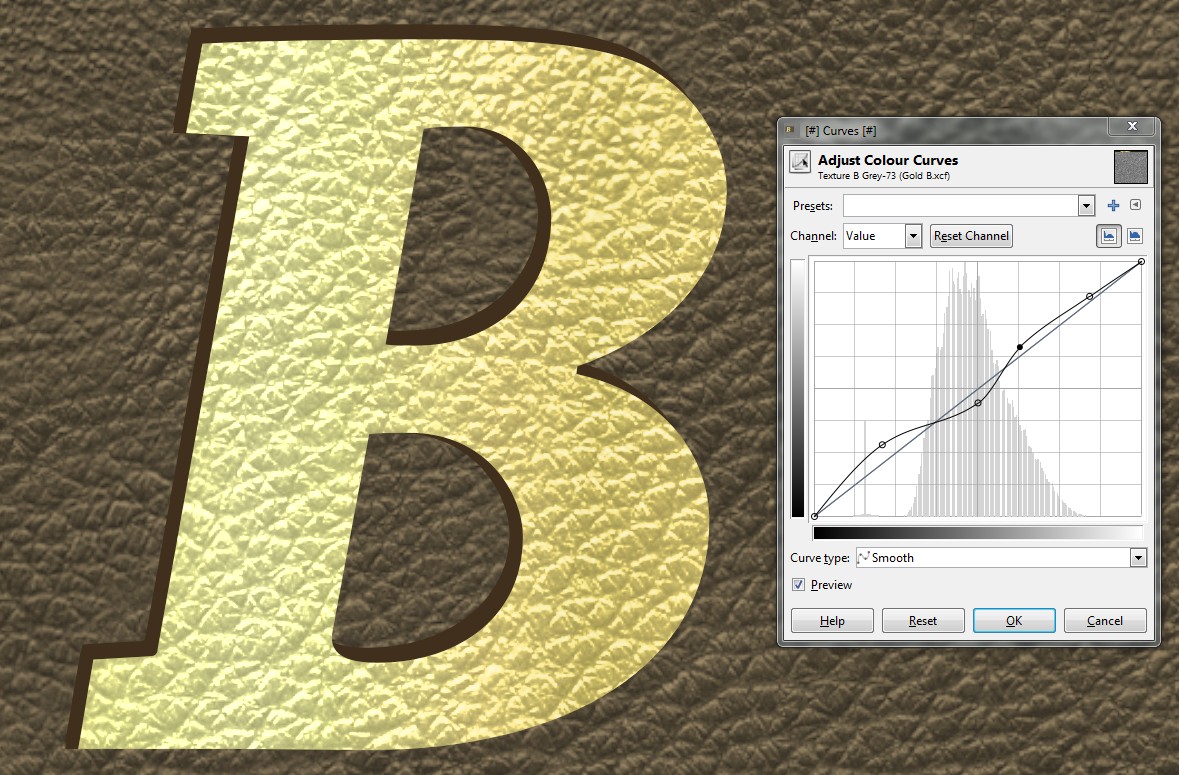 The exactly same texture maybe isn't the best option. The base material should suffer somehow when the gold is sunken there. See this easy alternative that has something left from the original texture: 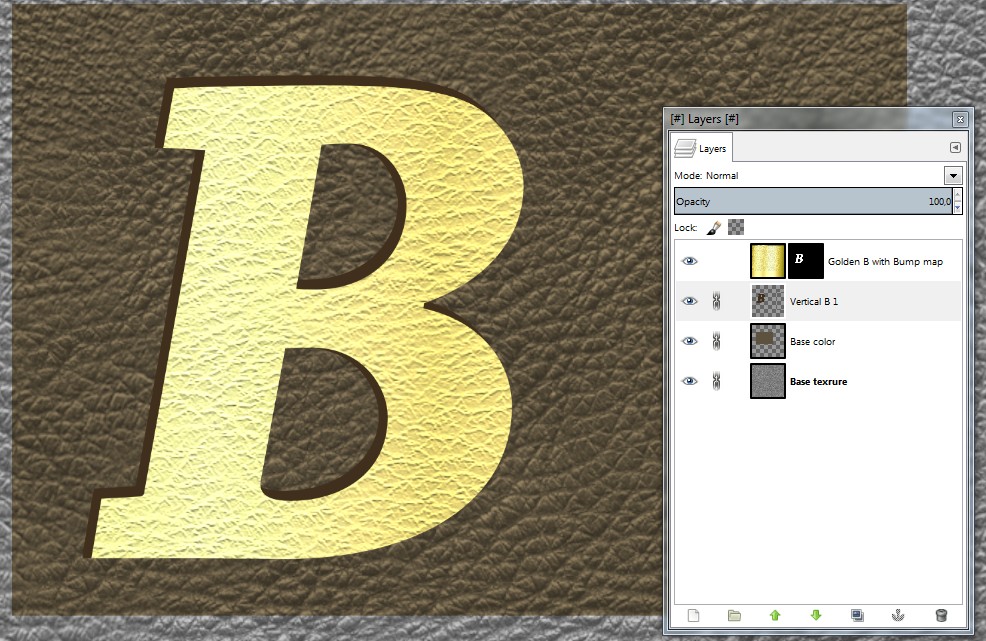 It's the untextured golden gradient, but Filter > Map > Bump map was applied. The base texture was selected to be the map. Play a little with the parameters to find the light which is compatible with the shading.

Still one easy variation is possible. It's the hard light version, but the color of the texture is inverted.

It's simply three copies of the darkened text, moved a little aside to cover large enough area. If you see it somewhere exessive, use the eraser. I didin't wipe off anything. It's still not geometrically perfect, but probably usable. Here all three are visualized (you need only one color) as red, green and blue: 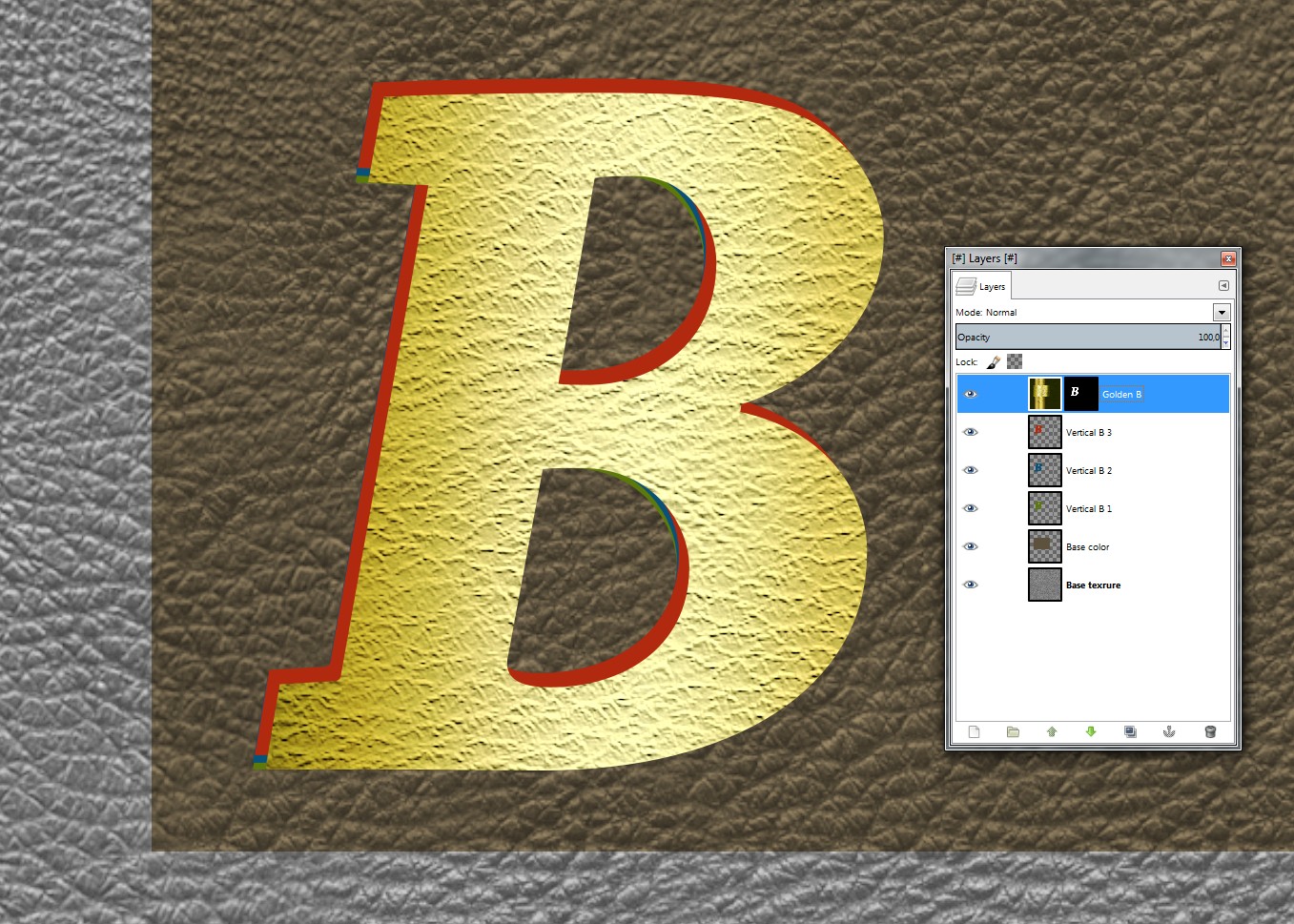 You see that the red is nearly all that is needed. For low resolution purposes one copy might be enough.

I turned the three copies of the shading text to bitmaps and merged them. I also tried to colorize the shading by gradients and applied to it grainy textures. The result was only a little more polished than the simple version. The bright text catches the attention.

I do not believe that you get much more improvment even by using a properly shaded 3D model for the vertical surfaces.

But one thing can be useful. Make a flattened single layer version of your image and add a perspective which is compatible with the shading. An example: 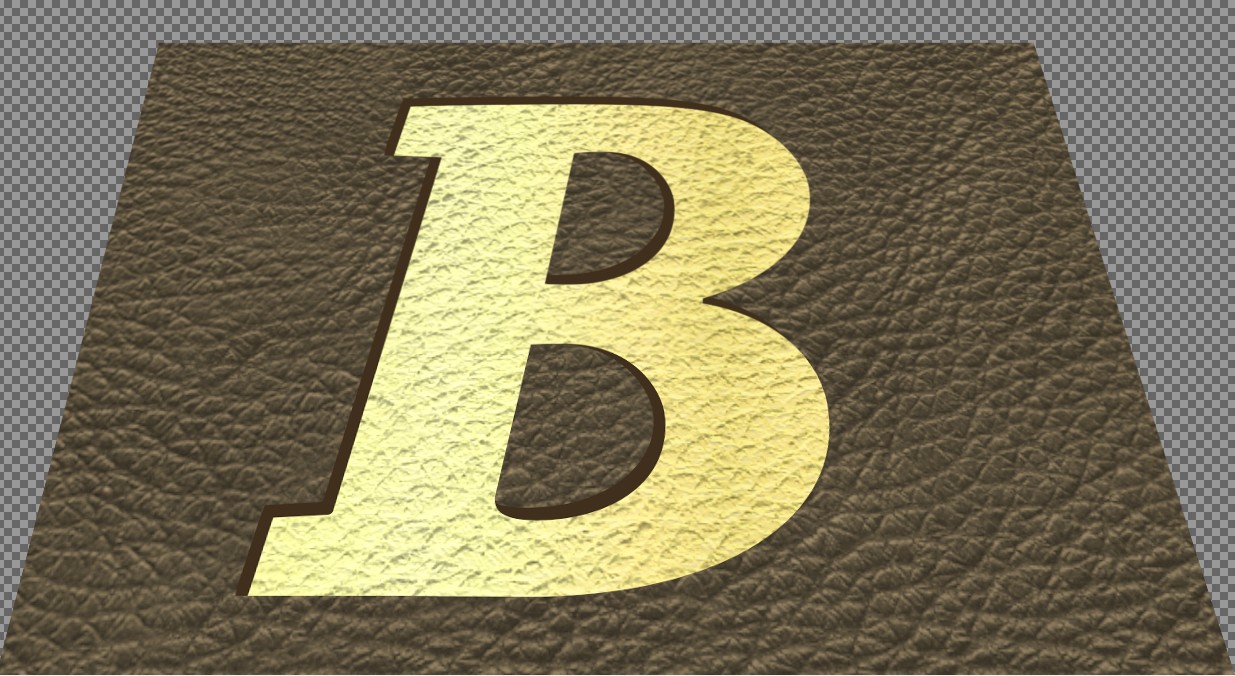 It would have been good if you could have shared what you have already.

Have you tried the Layer Effects plug-in? http://registry.gimp.org/node/186

It has several effects which could be useful such as bevel and emboss, drop shadows, strokes, inner and outer glow - much like the Layer styles in Photoshop.

Anyway, here's an example of what the plug-in can do.

I created some gold coloured text, and used the perspective distort to place it on the gold bar. Then I clicked Layers > Layer Effects > Bevel and Emboss.

I selected Inner Bevel, and applied the following settings 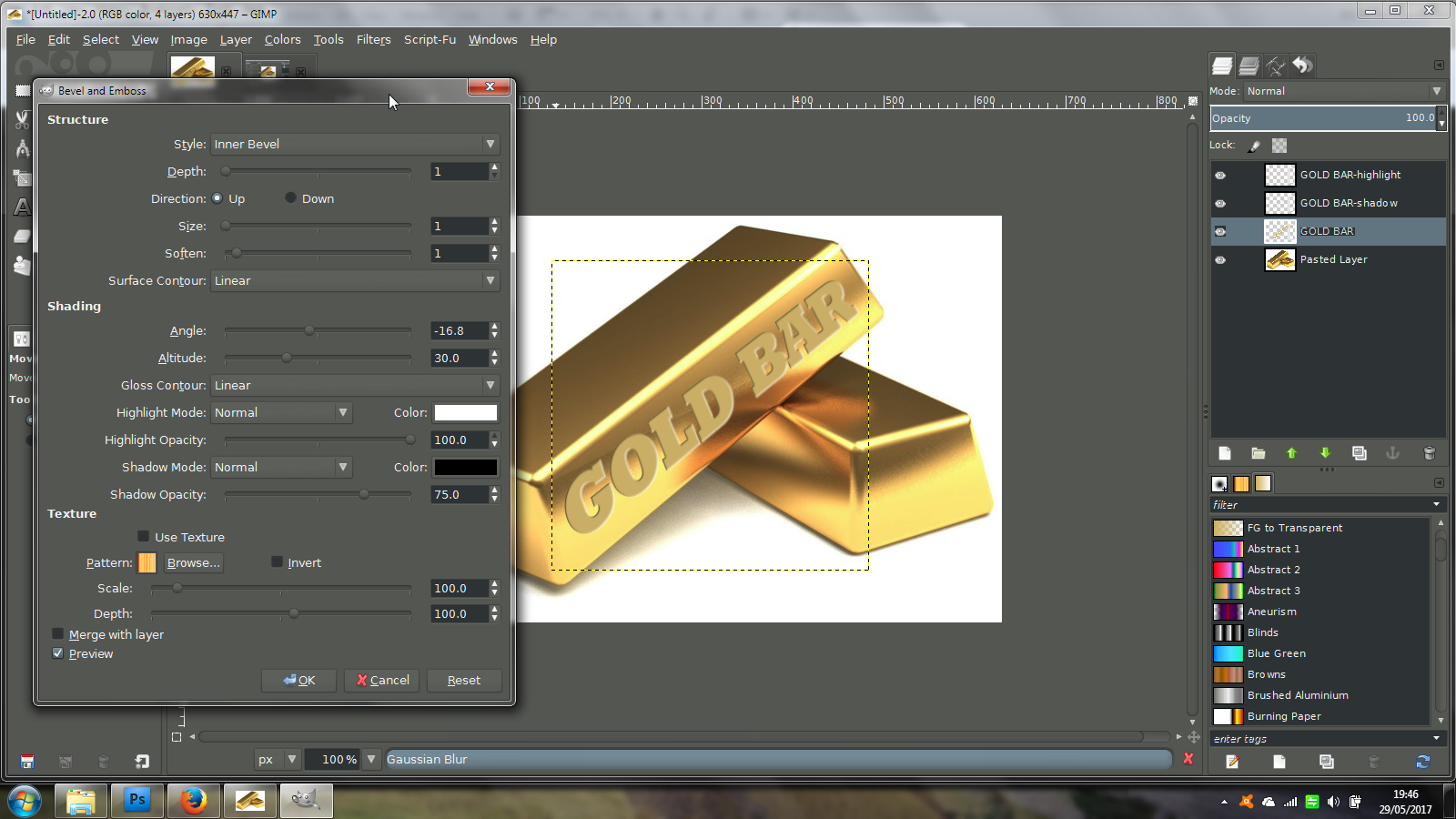 You will notice that you can also change the angle of light on the effect, obviously you'd need to choose the angle depending on the lighting of the image you are using. There also a setting to change the direction up or down.

Once you have applied the filter by clicking OK, it generates several layers in a layer group. You can select the text layer and reduce the layer opacity to let the texture of the gold shine through. In this example I set it low like 17%, but you could experiment with this. 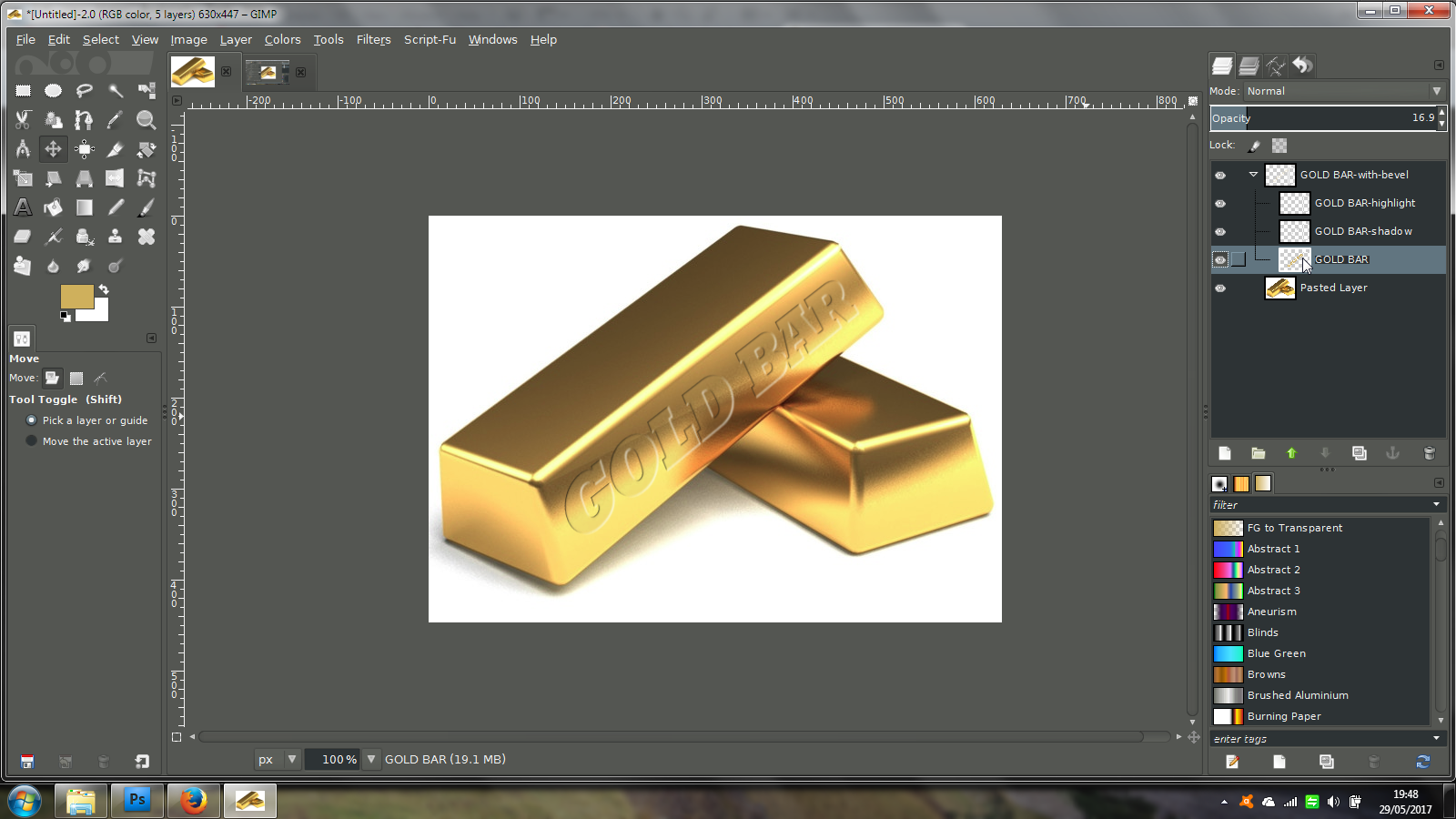 3
Adobe Illustrator: Making a shape appear to be "carved" into a surface

2
City map making (cartography) with GIMP.
337
Making the background of an image transparent in Gimp
9
After making a selection float in GIMP, how to move it in a straight vertical or horizontal direction?
3
Speed up making zoom areas on screenshots in GIMP
0
Gimp: making edges less smooth
3
GIMP - Flat image to round ball surface (sphere)
4
Creating a realistic gold surface in GIMP
7
Illustrator: How to create realistic reflective gold surface?
2
How to maintain lighting/shadows while making object transparent in GIMP?