I've been struggling to try and figure out how to create this, reading and watching tutorials etc. But I can't seem to take everything I've found and apply it to what I need. I want to cut the image below into segments that I can then edit, distort/warp as 3 separate objects. But I can't seem to unite or merge them without painting all the paths the same color. I created it using 7 long red rectangles, 6 white ones, 1 blue rectangle and 50 stars. Would I have to create the 3 individual shapes separately to do what I need? Thanks for your time! 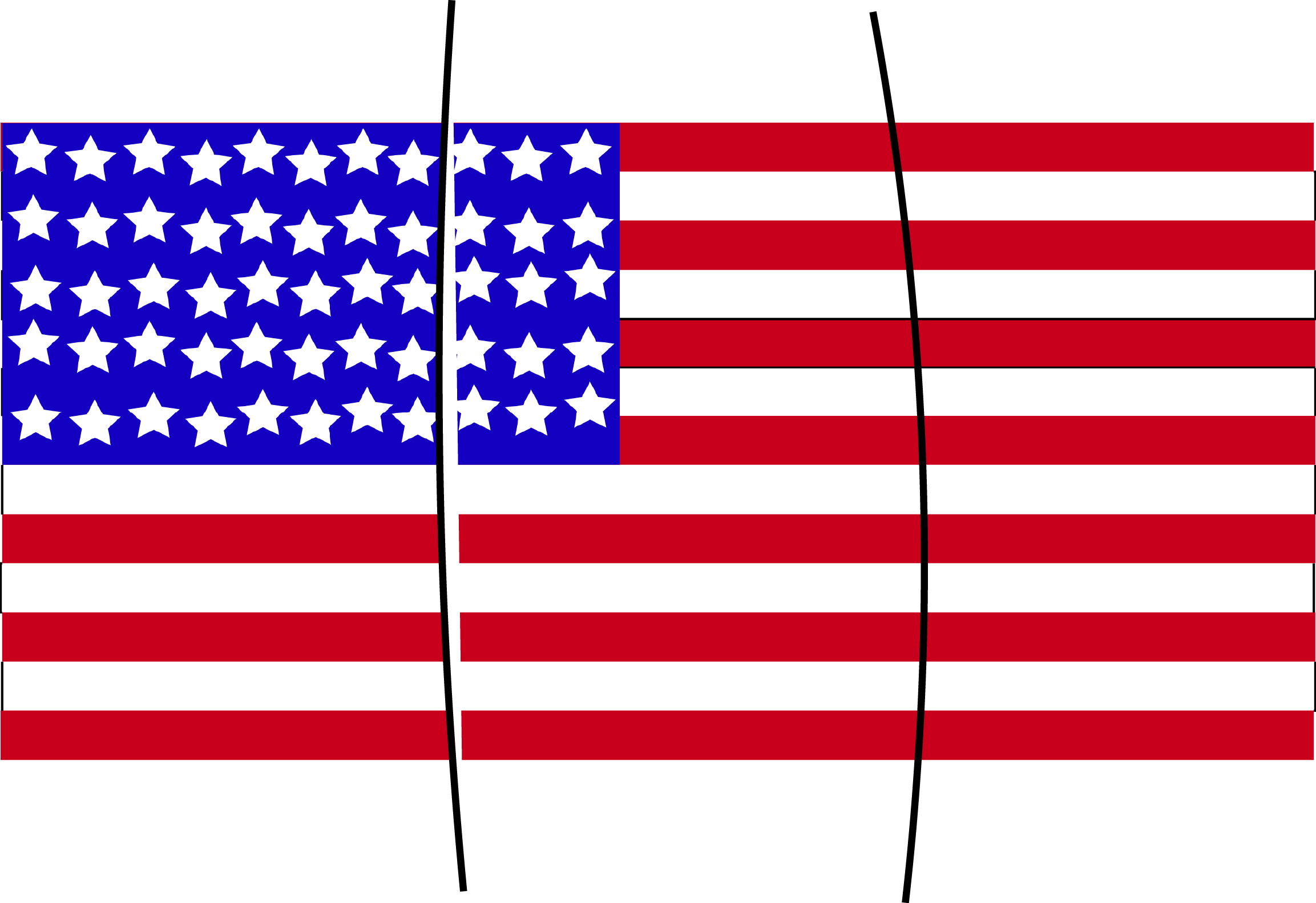 I recommend not to have 3 separate objects and warp them. It's virtually impossible to get them back together as one solid shape, only warped.

Select all, goto Object > Group and then warp all as one. It's not impossible to make the flag like it's waving in the wind, only remember to add a shape that makes the needed shading. 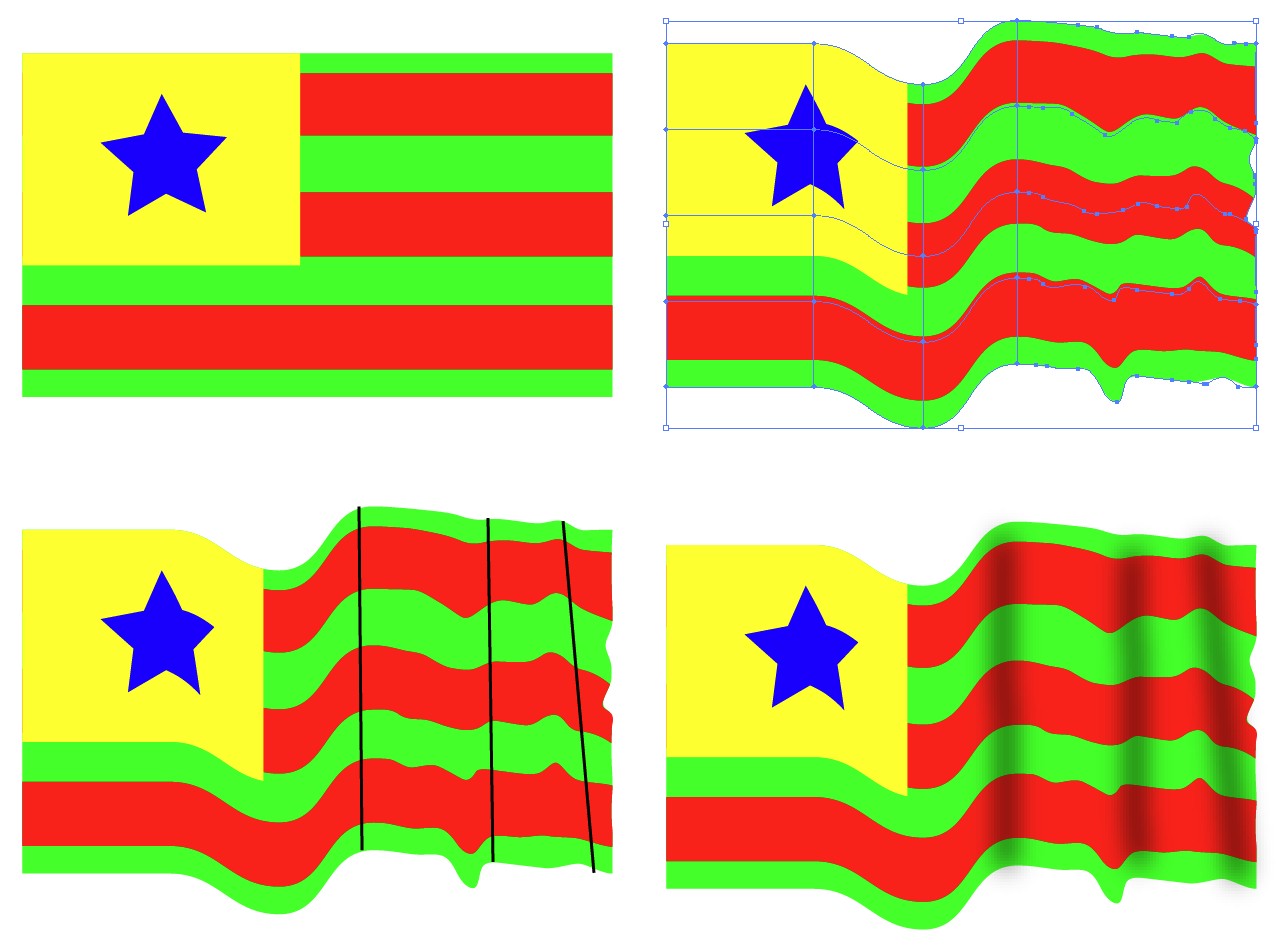 The warping can be done with the warp tool or by adding an envelope distort mesh.

Three black strokes were blurred for the shading. The colors are bright and fully saturated, so there's no use to try to have highlights)

Folding the flag over itself is difficult because the overlaps of the subshapes must be removed before the folding and the new arrange order of the objects must not clash with the wanted order. This is the place where dividing would be useful. Or rasterizing. Both of them have unwanted side-effects, so if Folding over itsel is needed, I suggest to do it with 3D effects.

Here's an example. The left is the folding only as 3D extrude and mapped the flag as texture. The right is some minor warping applied after that. The 3D effect Extrude includes the settings for its shadings. The warping was shaded by drawing black curves and blurring them.

Refer the details from tutorials or the user's quide.

After you warp, Expand and Ungroup. Your paths are restored and you can merge and combine sections at will.

When you join paths with the pathfinder the new path is given default fill. You'll have to manually apply the colors back in.

I would not use Unite, It will combine different color stripes. I'd actually put the pieces of the flag back into place, select all and use Divide. Then manually paint the red stripes red again and Unite all the reds, blues and whites.

Here I've replicated your design (except mine only has 50 stars LOL): 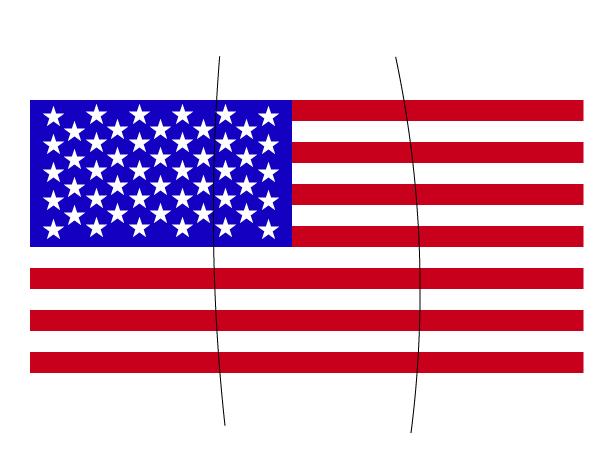 Here is my Layers Panel so you can see what I'm up to... (Disregard Layer 2): 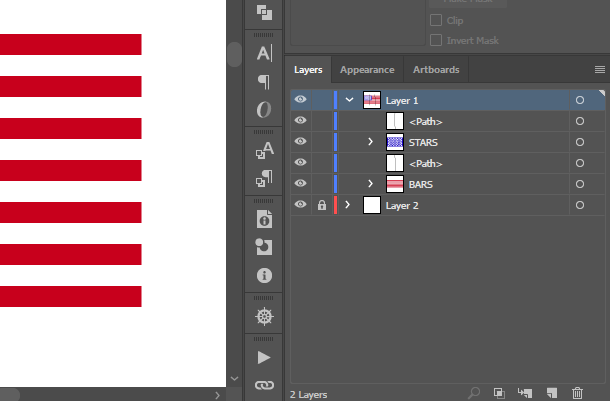 So from top to bottom I have:

Select the path on the right and the 'STRIPES' group by clicking and Shift+clicking on the layer 'meatballs' to make them active: 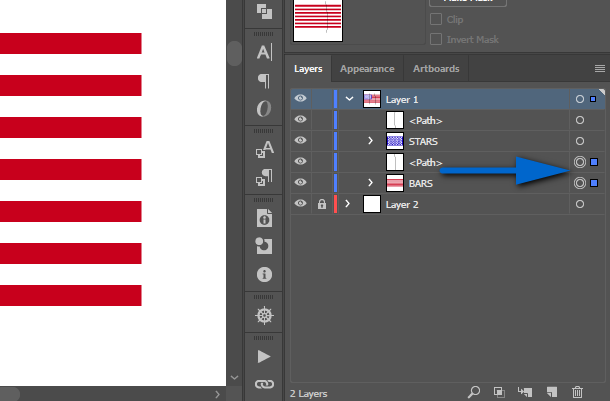 Then go to Window > Pathfinder and click on 'Divide'. Lock the 'STARS' group and the other path. Then using the Direct Selection Tool drag a selection over the rightmost edges of the stripes and hit Ctrl+G to group the first of your three sections.

Go to Selection > Inverse and then Ctrl+G again to group the other part of the stripes. Now our 'BARS' group has 2 groups within... Drag the group on the right up and out, hide it and lock it for now.

As you've probably guessed by now, at this point we'll take the other path and the group we just created with stars and stripes combined, and in the Pathfinder Panel once more select 'Divide'.

And just as before select (I used the Lasso Tool this time) and group the two resulting sections, and there you have your three: 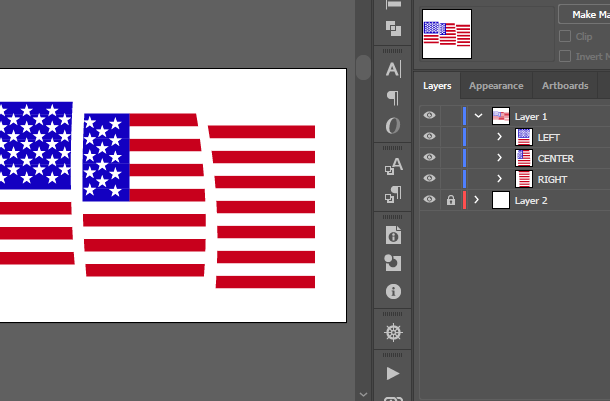 Not the answer you're looking for? Browse other questions tagged vector path illustrator-effects or ask your own question.