I'm trying to 'inset' a path a fixed amount, so that if I were to then increase the stroke width, I would end up with exactly the same shape. I understand that in some cases this just isn't possible, but I'm having trouble making it work even in really simple cases.

When I use the inset tool on a simple triangle (right) this works perfectly and does what I'd expect until the shape itself gets smaller (the image is created by repeated duplicate & inset).

However when I use it on slightly more complicated shapes like the two on the left, curves are very quickly introduced into shapes that never had them, in seemingly random places: 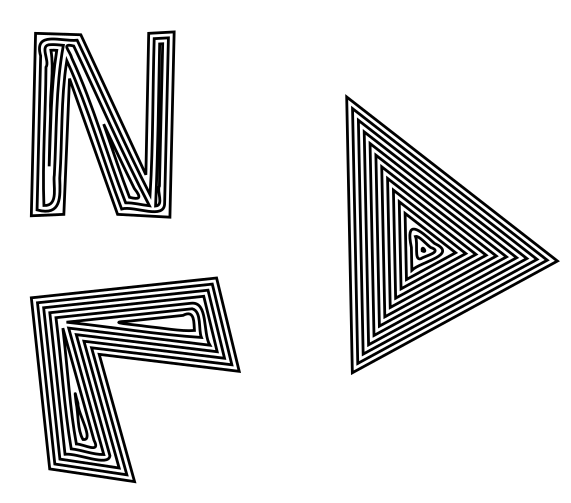 In each case I've drawn the shape with the straight line tool, but this happens even if you draw a rectangle (and in a non-symmetrical way): 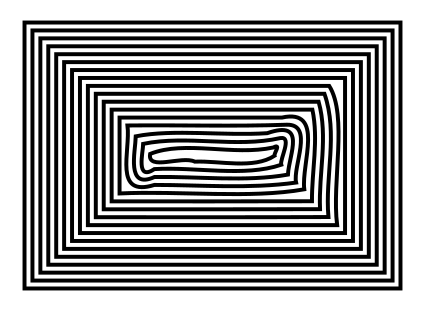 Perhaps I'm using the wrong tool for the job - but if so, is there another tool or extension that'd do what I want?

Note: This looks like a similar question to Outset small rectangle path in Inkscape without round distortion? but dealing with insets. Changing the inset/outset amount as suggested there hasn't really improved matters for me.

... I could use blend to get an image like in the examples, but this is just to demonstrate the issue. In reality I just want to take an object, convert it to a path, and then shrink that path so that when the path is (for instance) 1mm wide, the object has about the same outline as before.

I found that if you work at too small of a size, the threshold is too small so the inset starts to lose detail. However, if you make your part larger, you can use the tool more effectively and resize your work afterwards. This is just what worked for me when I had the same problem.

I've used both ways, inkscape is a really finicky program sometimes so I like to be able to do things more than one way, but either way works well. I usually work with my inset outset settings at 0.02" and that seems to work as well.

Not the answer you're looking for? Browse other questions tagged inkscape path path-effects or ask your own question.

5
Outset small rectangle path in Inkscape without round distortion?