I am working to modify an existing font (Sacramento, under SIL OFL license), and wish to adjust kernings after having made a few stylistic changes.

Here is an example with a "S" glyph followed by a "t" (note that both these glyphs have been modified compared to the original font I have based my new font on): 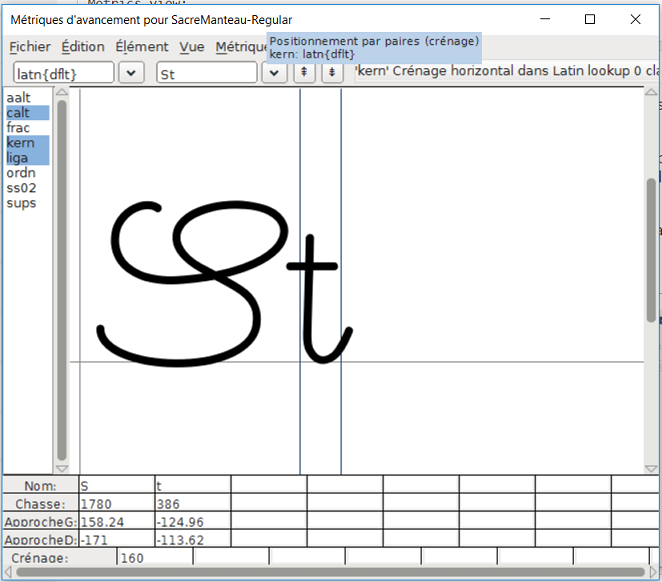 In the first case, the horizontal bar of the "t" clearly starts from under the loop of the "S", whereas in the metrics view, the "t" is located further aways from the "S".

When I generate the font and actually try it in a software, it seems the result is closer to what is shown in the kerning defintion dialog:

What could cause this inconsistency? Are there some parameters the Metrics view doesn't take into account? As shown below, when I go in the dropdown at the top of the Metrics view to select the kerning lookup table, the "kerning by class" lookup table is grayed out (there are two other existing kerning per glyph tables that are not grayed out). Why?

Browse other questions tagged typography kerning font-forge or ask your own question.

4
Editing glyphs in FontForge and related software has no effect – depending on where you look
3
FontForge: how to scale with saving proportions?
4
Kerning in FontForge does not seem to have any effect
1
Cap height and x-height metrics are inaccurate
2
Can't get my cursive font to connect fluidly (FontForge)
2
How to set an 'ignore' on a pattern for contextual substitution in FontForge
1
How to export font with “Kern Tables” and not “GPOS Tables” using fontforge?