Copying one stroke from Illustrator gives two masks in After Effects

I am new to After Affects CC but very experienced with Illustrator. I am trying to animate this logo to behave as if it is being continuously drawn. So it basically draws itself over and over. A looping GIF.

I originally had a fill in illustrator but when I copy and pasted it into a new solid layer in After Effects it splits the fill into 5 masks and animates each new mask individually. So now the logo is 5 different shapes and not 1 continuous stroke. I am using Effect > Generate > Stroke. So then I drew the logo with one single stroke using the variable width tool to adjust the stroke width. Copied it into After Effects the same way and After Effects splits the single stroke into 2 paths? I have the same problem. Is there anyway to join the masks into 1? I don't understand why After Effects is splitting a single stroke into 2 separate masks? I have experimented with using Add, Subtract etc. on the masks in After Effects but that still makes no difference to it still being split into 2 separate masks. See pictures. Thanks for any help. 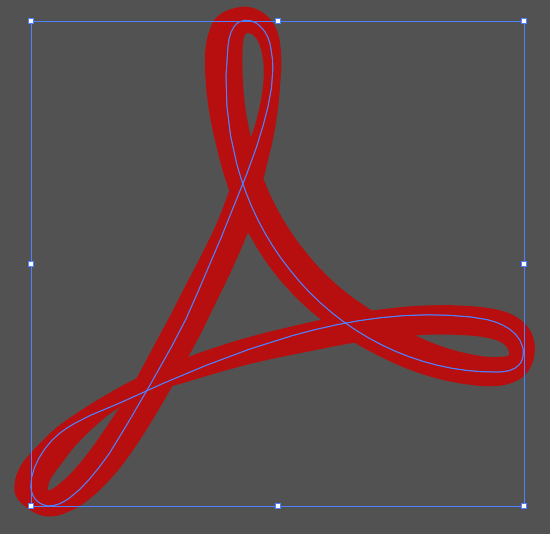 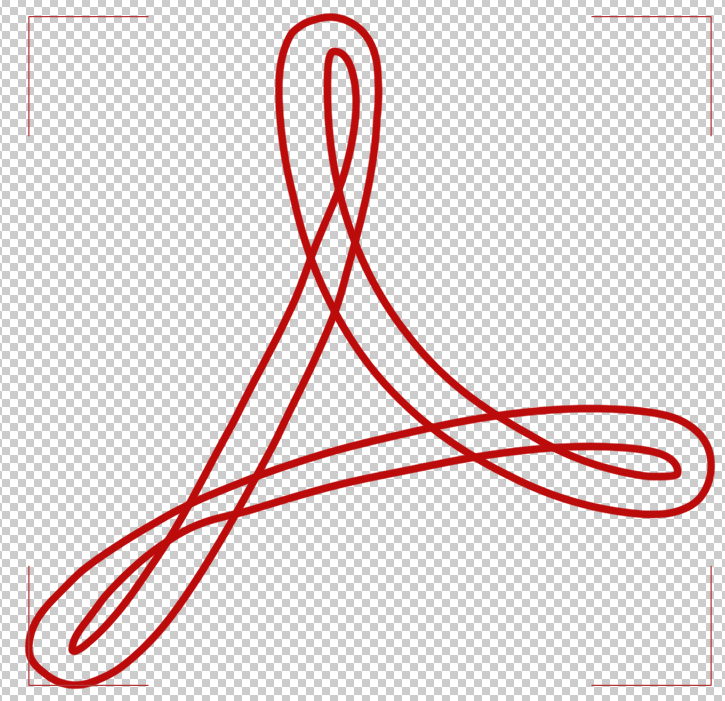 Unfortunately with a single intersecting path then you'll end up with something like this:

There's not much of a way around that while keeping it as a single stroke (you could cleverly mask the overlaps, but that's not very practical). The easiest solution is to separate the paths so each overlap is its own distinct path (with its own mask too)...

I'll walk you through how I did this. The explanation looks long and complicated, but it actually only took me ~15 minutes once I knew what I was doing.

In Illustrator, you first need a path for the stroke animation, and an outlined stroke for the mask. The path for the stroke needs to have a basic appearance to import in to After Effects correctly; no brushes or width profiles. It can have a basic stroke but nothing else (and you can change the stroke once we're in After Effects anyway). The outlined stroke to use as the mask just needs to be an outlined version of your variable width path.

You should have something like this (viewed in outline mode): 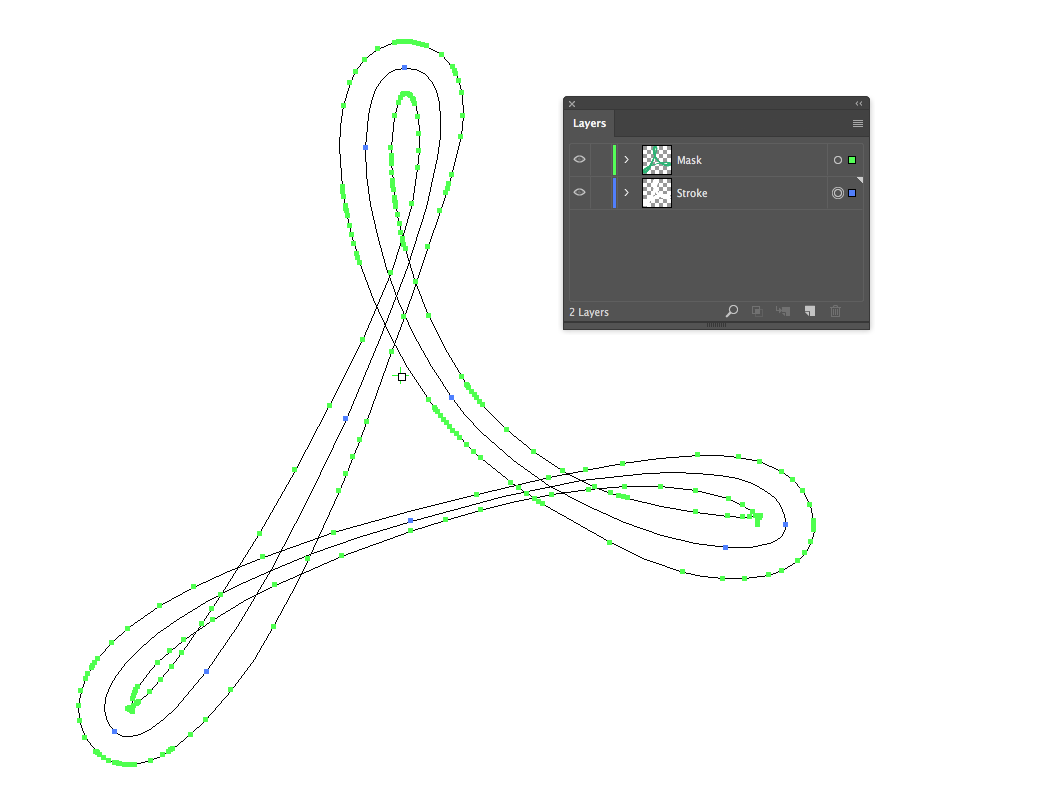 Still in Illustrator, separate the paths so that no path intersects itself (in this case you need three paths). You need to do this with both the stroked path and the mask paths. 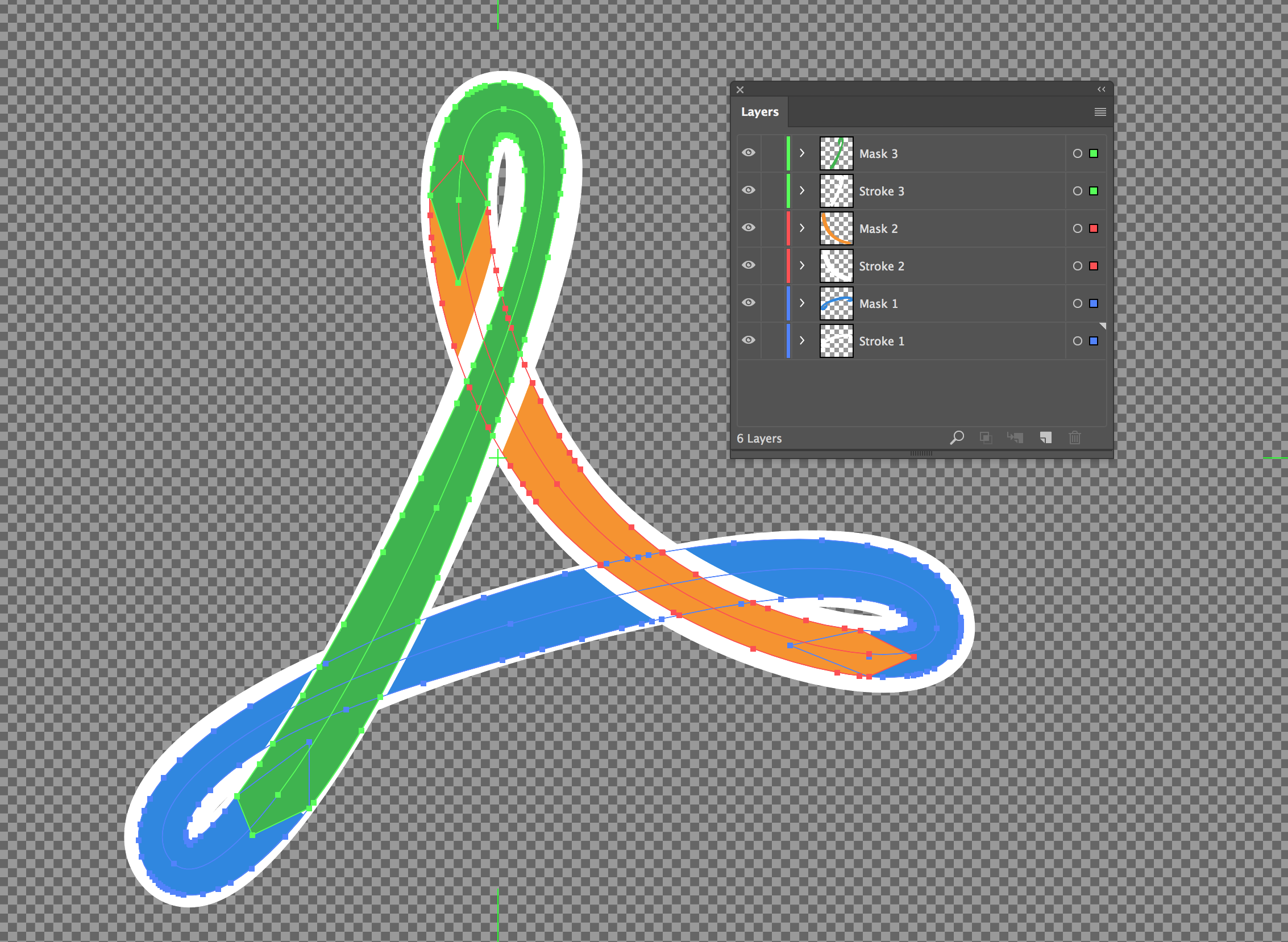 Import the AI file in to After Effects.

Convert the first stroke path layer to a shape layer (Right click layer → Create Shapes from Vector Layer), that should give you a new shape layer with a single path — you can then delete the original AI layer.

Set the stroke width wide enough to completely fill the mask and add a Trim Paths from the "add" button on the "Contents" property of the layer.

Then all you need to do is animate the "start" and "end" of the trim paths.

Repeat for the other path segments and you should have something like this:

That doesn't loop properly, but you can just duplicate the needed keyframes and loop at the appropriate place:

All that's left to do then is mask each stroke. You could use a regular mask but it's easier to just use the layers you already have as track mattes (track mattes are basically opacity masks, rather than vector masks).

Just make sure each mask layer is directly above the relevant stroke segment in the timeline and choose "Alpha Matte" from the track matte dropdown on each stroke layer: 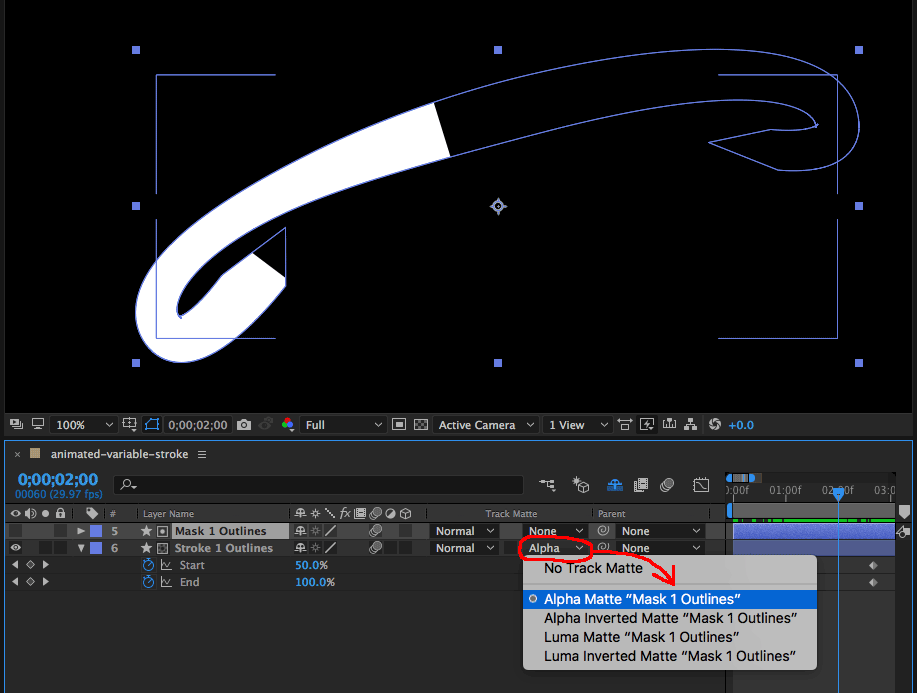 I had a similar issue and came up with an idea that may be an alternative solution - cutting the overlapping parts into sections and separate pre-comps. I created a video tutorial to show what I did - I hope this might be helpful: https://www.youtube.com/watch?v=moPWXM1jbpw

Not the answer you're looking for? Browse other questions tagged adobe-illustrator animation adobe-after-effects or ask your own question.

3
Stroke doesn't scale proportionately when entering new size via keyboard
0
Illustrator - Compund Paths (2 paths) to SVG
4
Why does fade in/out animation stop working after animation is exported from After Effects
3
After Effects - Parenting shapes to points on a stroke
1
Fill the inside of a hollow font
3
After effects: Scripty text write-one
0
Creating a new object from the fill of an object
1
Exporting SVG from illustrator as strokes instead of paths
0
How can I change the shape of a stroke? (after effects)