I'm going slightly mad trying to 'restore' 19th-century maps that were photographed in less-than-ideal lighting conditions. Even before getting to the stain/tear repair, I have to ensure that I have an even paper base to work from, but I can't seem to make it past this point without losing a massive amount of detail.

This is the document as photographed: 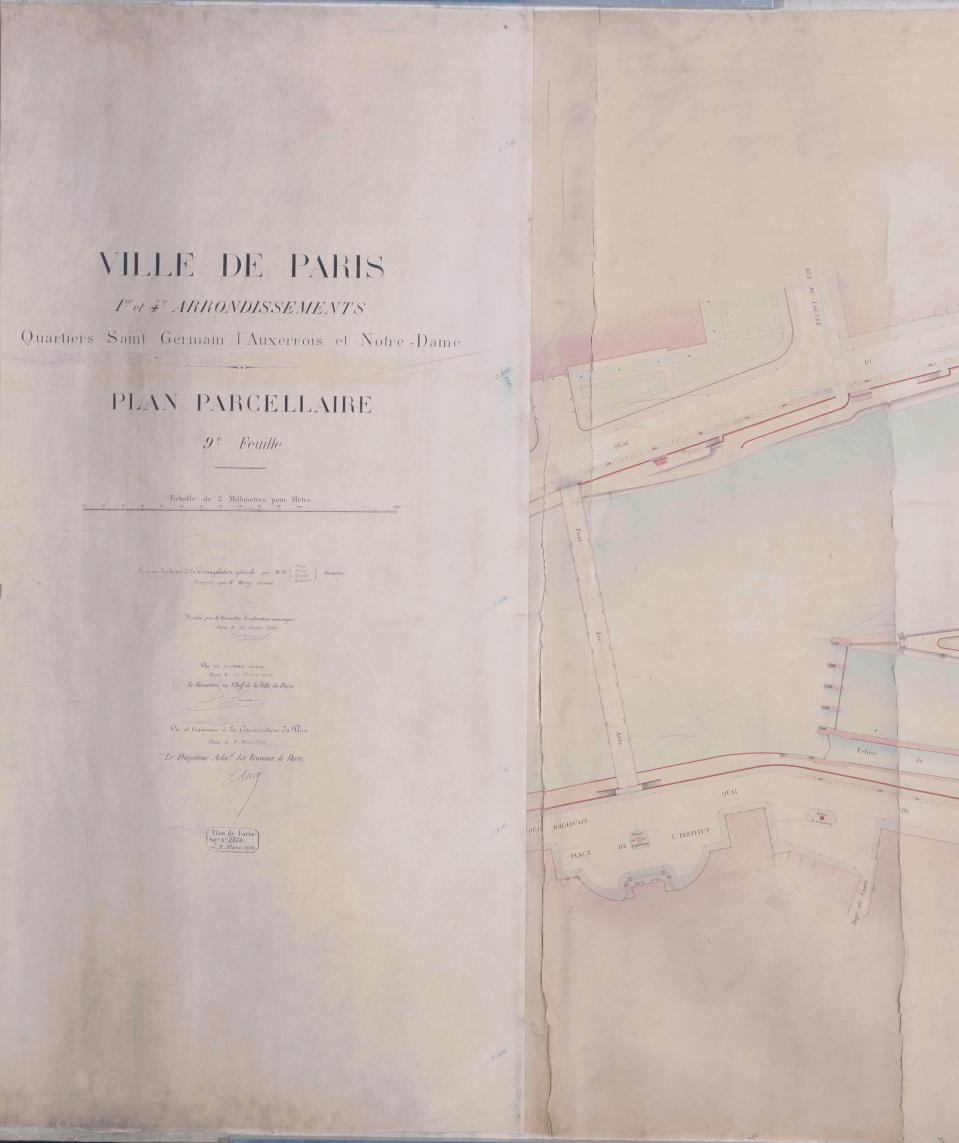 If anyone has any pointers on how to go about this, thank you very much.

Link to the full-resolution document: https://drive.google.com/open?id=0B_LmFeEi93k8OThaM1lVQlI3bzA

Again an old question needs something says the system. Here it is:

Obviously the questioner has a big pile of bad photos that need some treatment. The texts are quite sharp, but the light and the paper surface color are so uneven that adding contrast does not make texts more readable. 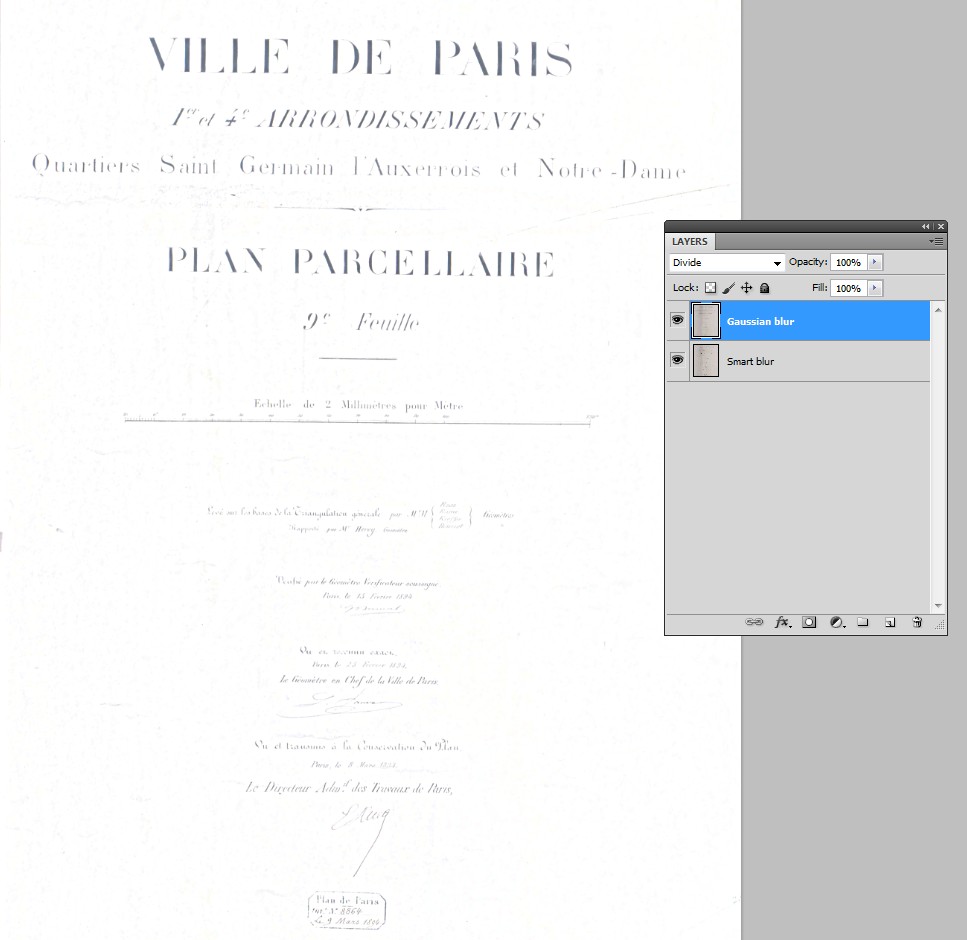 This does not delete details as you see in a zoomed snippet: 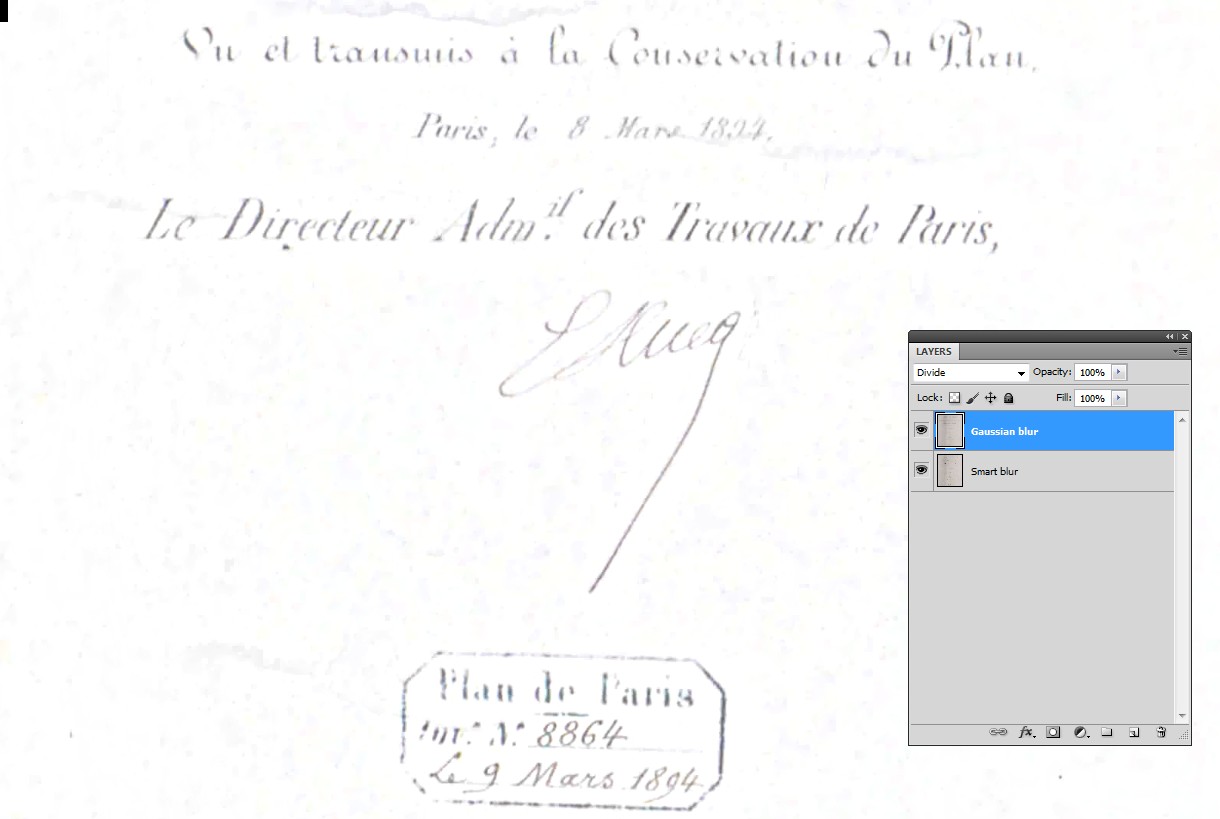 The whitening is made by dividing two filtered versions of the text page:

On the bottom there is a blurred wersion which is made with the smart blur filter. Smart blur has a treshold setting for local contrast level which will stay unblurred. It can be set to keep the texts sharp, but to smooth large area variations.

On the top there's a Gaussian blurred version. All fine details are lost, only large area variations are left. The blending mode Divide makes white all which is equal in both layers.

One can add contrast by adding a curves layer and finding a curve that makes the text more black, but does not boost the underlying light random texture. It's not applied here, but we'll use it later.

The whitening removes uneven light. Unfortunately it also removes large colored areas, so color image pages should be whitened only to extract the texts and line drawings. We'll do it, too, later.

If one wants to save the colors and still add the contrast he can put a curves layer onto the smart blurred image: 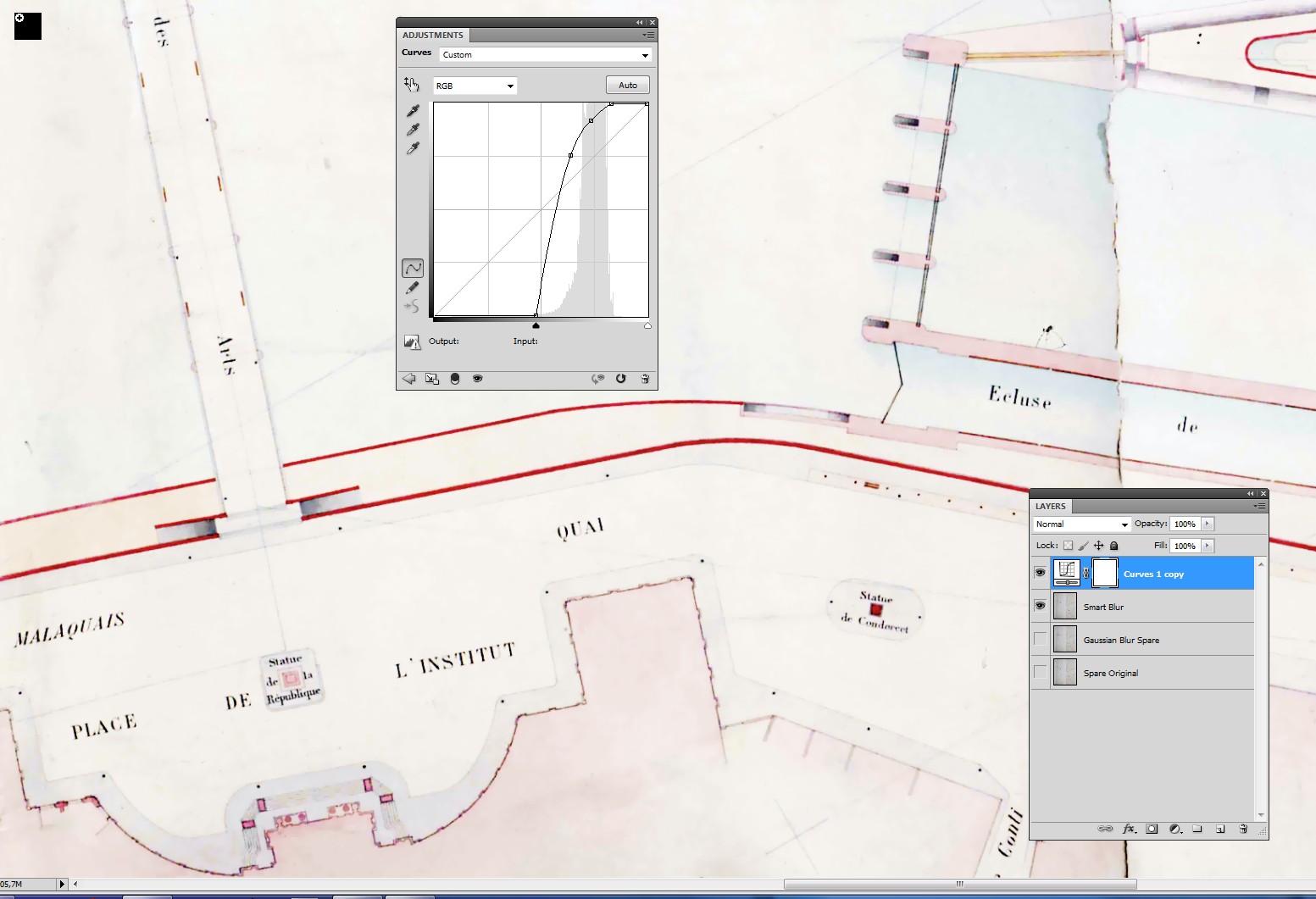 The result is cleaner than which can be got by applying the curves layer directly to the original or white balanced version. This is because smart blur removes plenty of small noise-like fake detail.

The used blur radius here = 25 pixels. Smart blur had treshold = 10. Increasing it to 14 or 15 was possible, but the weakest printed lines started to suffer.

La Grande Finale: We can take the color from a layer that has got smart blur and more contrast. We give the color to a little greyed whitened layer that has got contrast boost. Blending mode color gives the color to the underlying image. We have also a dedicated Hue&saturation adjustment layer. It's used to desaturate selectively the orange...green fake.looking tint which exists here and there: 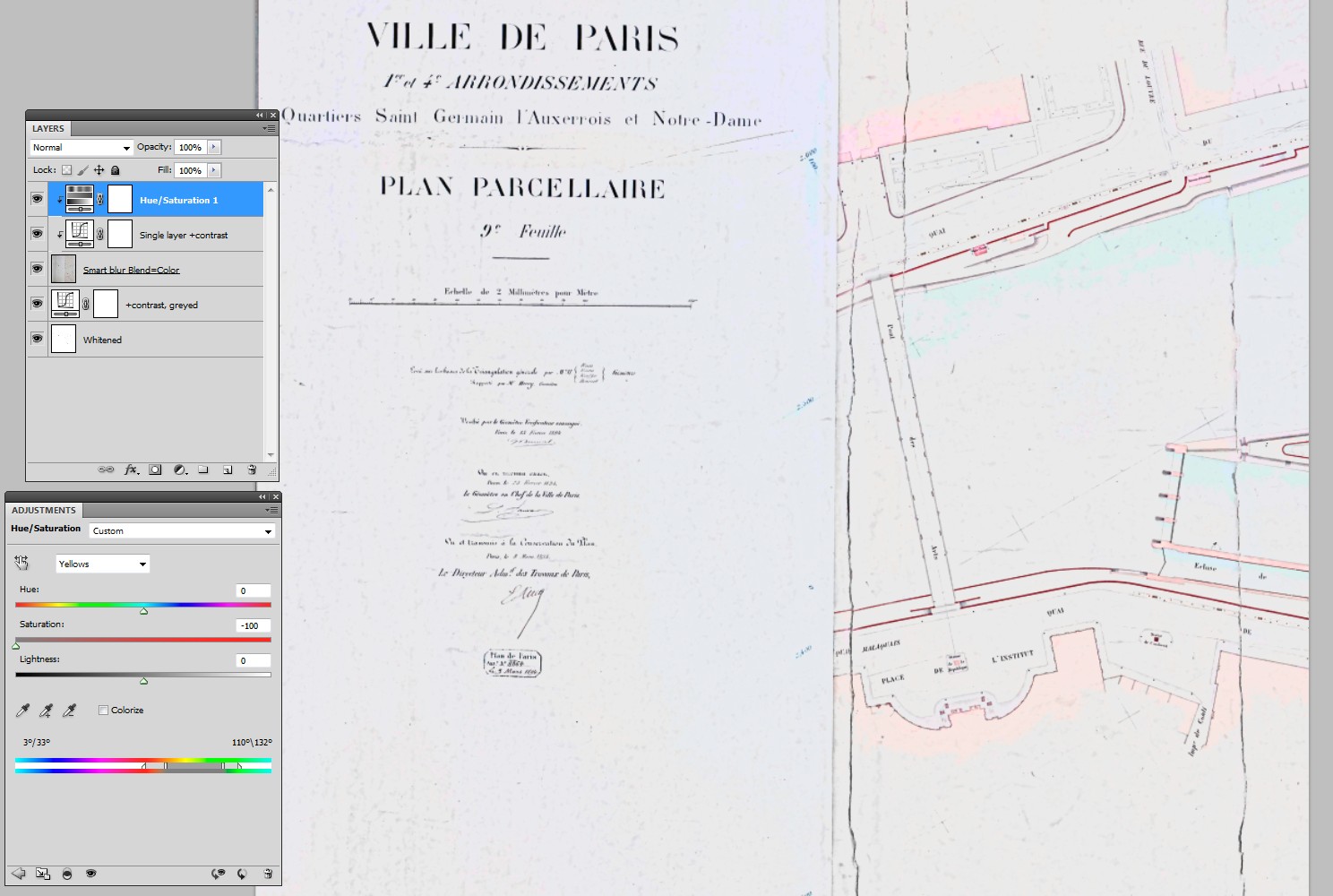 The following shot has two snippets of the result to show the remaining readability: 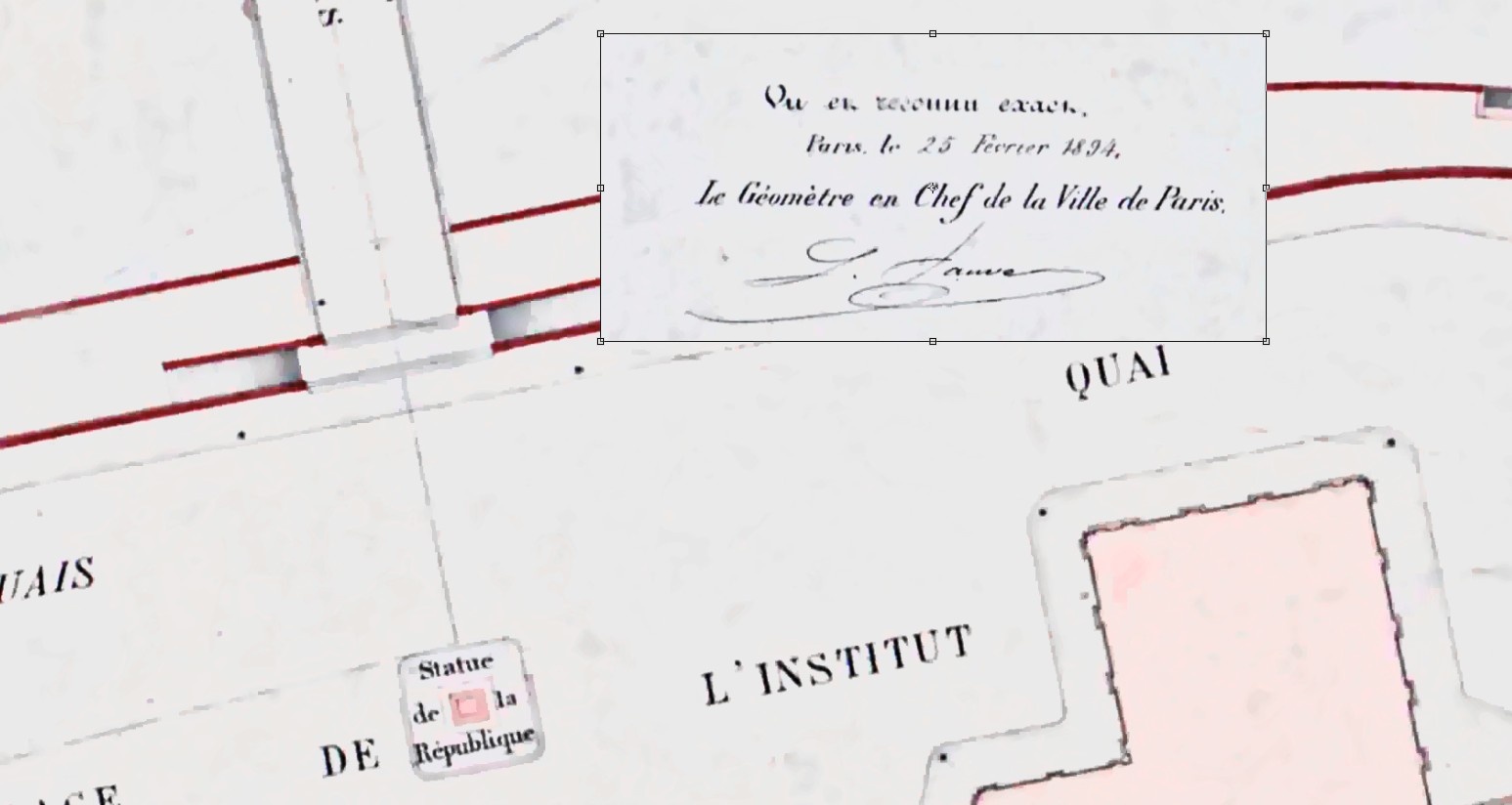 I didn't found a way to make it better except randomly by accident. I did some tests in LAB color mode. There tweaking the curves in the channels gave results of the same type + plenty of unusable crap, too. Getting some benefit manageably needs more undehood knowledge of the color math than I have, so I leave it to mode advanced users.

Josef, the short answer is: there is no one button to do this in Photoshop. The good news is there are several tools in PSD, used in the right combination can achieve what you asked. For example, I was able to get this much done in a few minutes using a combination of Levels, Curves, Dodge/Burn Tool, but MOSTLY used the Adjustments > Replace Color. My favorite trick in the Replaced Color is to select the background, crank up the threshold, and lighten the (background) colors.

Again - this is just a few minutes of work. With a high resolution and more time, this could be a fun project.

Too bad we're not allowed to promote our freelance services on this site ; ) 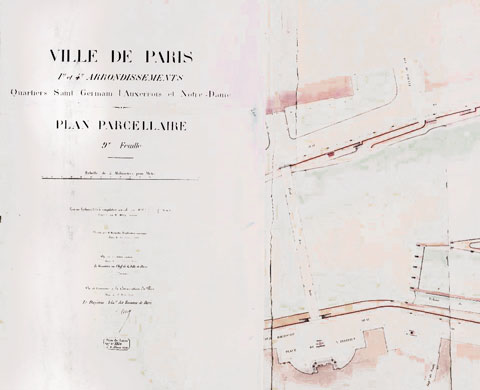 Not the answer you're looking for? Browse other questions tagged adobe-photoshop paper lighting-effects or ask your own question.

2
Photographed monitor screen effect
1
How to preserve and reproduce lighting effects on print
0
Photoshop brush darkening and lighting
0
How do I create this lighting overlay in Photoshop?
3
Cinema 4D setting up a 3 point lighting system for whole scene
2
Lighting setup for C4D
0
Matching 'fake' in Photoshop - lighting on overlay